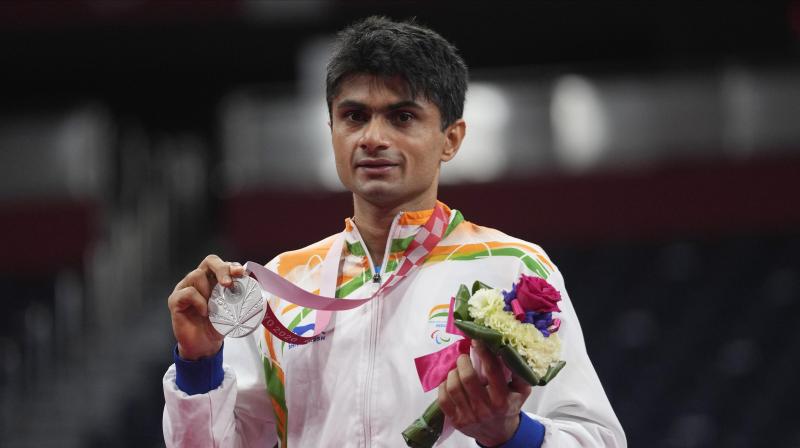 Tokyo: India's Suhas Lalinakere Yathiraj ended his campaign with a historic silver after going down fighting against top seed Lucas Mazur of France in the men's singles SL4 class final at the Tokyo Paralympics here on Sunday.

The 38-year-old Noida district magistrate, who has an impairment in one of his ankles, produced an entertaining performance before narrowly going down 21-15 17-21 15-21 to two-time world champion Mazur in a 62-minute summit clash.

The unseeded Suhas had lost to Mazur, who has won three gold medals in European Championships as well, in the qualifying group A match but the Indian made a tremendous effort in the final to challenge his world No. 1 rival.

The district magistrate of Gautam Buddh Nagar (Noida) thus also became the first-ever IAS officer to win a medal at the Paralympics.

"I'm quite happy with the performance but I should have finished it off in the second game," said Suhas after winning India's third medal in badminton.

"So I'm a little disappointed that I didn't finish it off because I had a handsome lead in the second game. But congratulations to Lucas. Whoever played better is the winner."

In SL4 class, shuttlers have lower limb impairment/severe and they play standing.

Earlier, Pramod Bhagat and Manoj Sarkar had won a gold and a bronze respectively in men's singles SL3 category on Saturday.

In SL4 bronze medal play-off, second seed Tarun Dhillon went down 17-21 11-21 to Indonesia's Fredy Setiawan in 32 minutes to miss out of a medal at the Yoyogi national stadium.

In the gold medal match, Suhas stepped it up on the big stage. He completely dominated the proceedings early on, celebrating each point with a fist pump as the Indian contingent got behind him.

Suhas stood close to the net and created the opportunities in the rallies to move neck-and-neck with Mazur from 5-5 to 8-8. The Indian varied his pace and put pressure on his fancied rival to lead 11-8 at the first break.

Suhas, playing with a smile, controlled the proceedings with Mazur, who looked jaded after the gruelling semifinal against Tarun Dhillon. The French missed the lines, hitting wide and long to allow the Indian lead 18-12.

Suhas eventually grabbed five game points and next pushed one at the backline to pocket the first game.

The Indian continued the momentum, leading 3-1 in the second game. However, Mazur dug in and clawed back into the lead at 6-5. Suhas again turned it around to lead 11-8 with Mazur making silly mistakes.

The Indian maintained his lead at 14-11 after resumption but Mazur grabbed nine of the last 11 points to roar back into the contest.

Suhas rode on his flurry of smashes to make a superb start to the decider, leading 3-0. He picked his shots wisely to maintain a 6-3 lead but Mazur again fought his way back to 9-9.

But two errors handed Suhas the lead at the break again.

Mazur soon eked out a three-point lead at 17-13 with his aggressive returns on the Indian's body. Suhas committed a series of errors in the final stage to allow Mazur grab five match points and the Frenchman sealed it when the Indian went to the net.

A computer engineer, Suhas went on to become an IAS officer and has been posted as a district magistrate of Noida since 2020, a role that saw him at the forefront of the fight against COVID-19 pandemic.

On the court, he has won gold medals at 2017 BWF Turkish Para badminton championship in men's singles and men's doubles. He also won gold in 2016 Asia championships, besides a bronze at 2018 Asian Para Games.

Djokovic to face Zverev in semi-final at Olympics