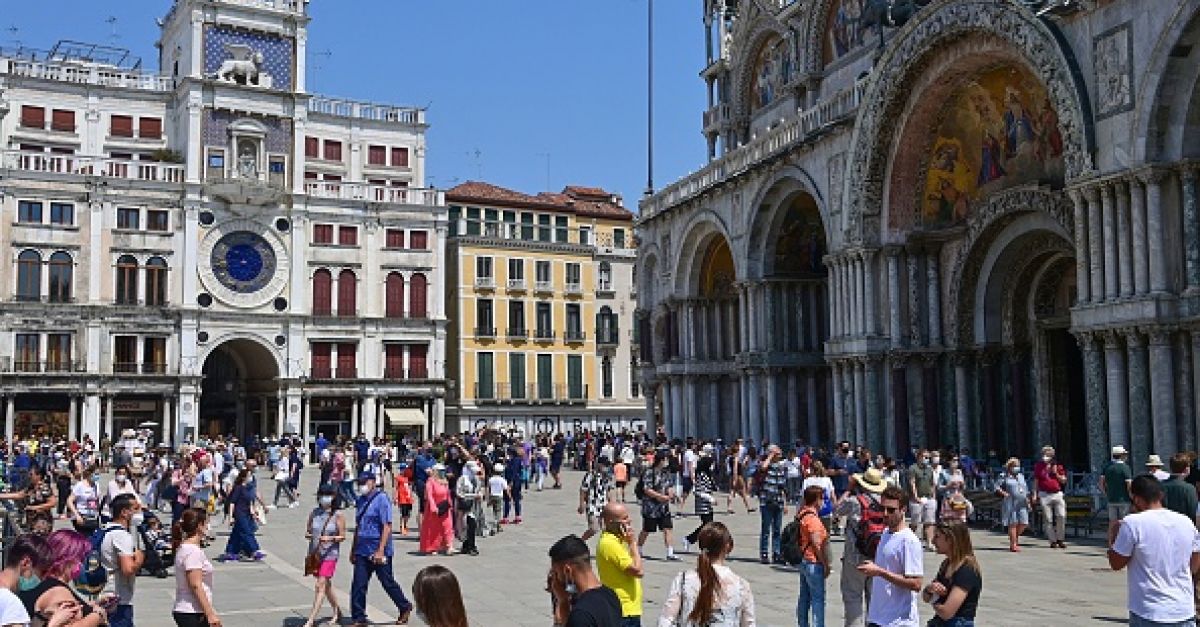 From a control room inside the police headquarters in Venice, Big Brother is watching you.

To combat tourist overcrowding, officials are tracking every person who sets foot in the lagoon city.

Using 468 CCTV cameras, optical sensors and a mobile phone-tracing system, they can tell residents from visitors, Italians from foreigners, where people are coming from, where
they are heading and how fast they are moving.

Every 15 minutes, authorities get a snapshot of how crowded the city is – alongside how many gondolas are sliding on the Canal Grande, whether boats are speeding and if the waters rise
to dangerous levels. Every 15 minutes, authorities get a snapshot of how crowded the city is – alongside how many gondolas are sliding on the Canal Grande. Photo: Miguel Medina via Getty Images

Now, a month after cruise ships were banned from the lagoon, city authorities are preparing to demand that tourists pre-book their visit on an app and charge day-trippers between €3 and €10 to enter, depending on the time of the year.

Airport-like turnstiles are being tested to control the flow of people and, should the numbers become overwhelming, stop new visitors from getting in.

Venice mayor Luigi Brugnaro says his aim is make tourism more sustainable in a city visited by 25 million people a year. But he acknowledges the new rules are likely to be a hard sell.

“I expect protests, lawsuits, everything…but I have a duty to make this city liveable for those who inhabit it and also for those who want to visit,” he told foreign reporters on Sunday.

Potential visitors are sceptical. “It brings the wrong tone in me when I hear that I have to pay entrance just to see the buildings in the streets of the city because who decides who can go in?” said Marc Schieber, a German national in Venice for the current film festival.

“I think it is probably a new way to generate money.”

Brugnaro said authorities had yet to decide how many people was too many, and when the new rules would kick in, though they were expected to come into force between next summer and 2023.

The scheme, first mooted in 2019, was postponed because of Covid-19. During last year’s lockdown, Venetians marvelled at their city’s narrow alleys for once without throngs of tourists,
the lagoon waters made pristine by the absence of motorboats.

But as visitors returned to pack St Mark’s Square this summer, officials say Venice cannot afford, for its own survival, to let the numbers go unchecked.

Some 193,000 people squeezed into the historic centre in a single day during the 2019 Carnival, before the pandemic struck. On August 4th this year, the city counted 148,000, with the difference explained by the fact many US and Asian travellers have still not returned to Europe.

“There is a physical limitation on the number of people that can be in the city at the same time,” said Marco Bettini, director general of Venis, the IT company that built the
monitoring system in partnership with phone operator TIM.

“We don’t want to leave anyone behind or stop people from coming to Venice. We want people to book in advance, tell us where they want to go, what they want to visit, in order to provide a better quality of service.”

Residents, students and commuters will be exempt from the tourist tax. So will those spending at least one night in a Venice hotel, given they will have already paid the overnight tariff of up to €5 a day levied by the city.

Brugnaro brushed aside concerns about privacy, saying the data collected was anonymous. But his message was clear: by controlling the number of tourists that come to Venice, he also wants travellers to behave.

“There’ll be conditions attached to obtain priority bookings and discounts,” he said. “You can’t come in your swimming suit. You can’t jump from a bridge or get drunk. Whoever comes must respect the city.”

In Venice, where the number of residents in the centre has shrunk to just 55,000, from about 175,000 in the 1950s, Brugnaro’s plan is the subject of heated debate, with some worrying it will deter less well-heeled tourists and turn the city into a theme park.

Others, such as 50-year-old Stefano Verratti who sells Murano glass near the train station, backed the idea of discouraging day-trippers.

“I have been here for 30 years, and it used to be very different. Before Venice was really romantic,” he said. “Now it’s just people rushing to buy a kebab, take a quick selfie on
the Rialto bridge, and then rushing to take a train. I don’t know if they really enjoy it.” – Reuters

Five expert-backed ways to bolster your immune system during autumn

An engaging tale of Parsis in India