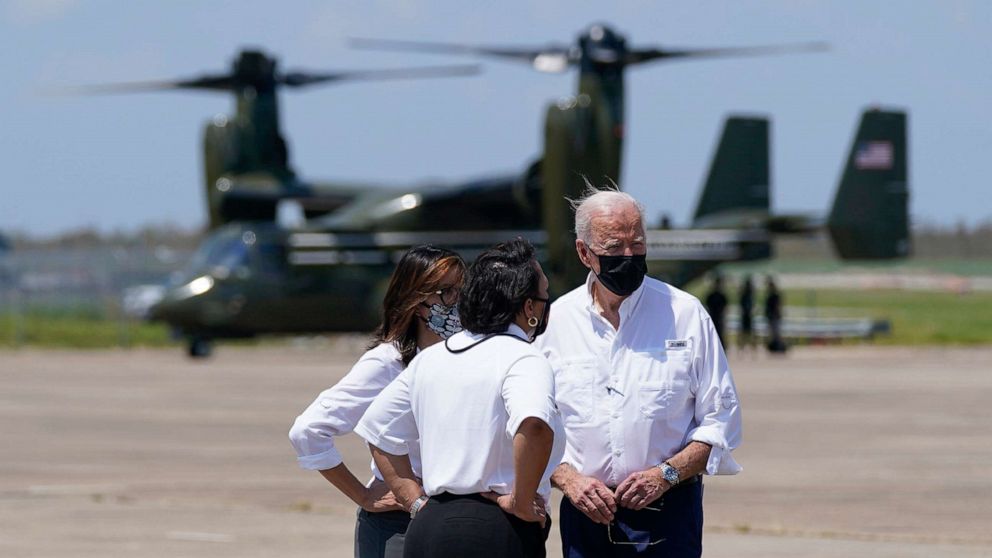 President Joe Biden traveled to New Orleans Friday to survey damage caused by Hurricane Ida, meet with local leaders and demonstrate the federal response to the storm that made landfall in Louisiana before devastating much of the northeastern United States.

“We came because we want to hear directly from you all, what specific problems you’ve been dealing with,” Biden told local officials in hard-hit LaPlace, Louisiana, just outside New Orleans.

The president toured damaged homes in the Cambridge neighborhood of LaPlace, greeting, hugging and speaking with residents — embracing the president’s traditional role of consoler-in-chief.

One home was covered in a large, blue tarp, while uprooted and downed trees surrounded the houses.

In LaPlace, local officials spoke with the president about the destruction in the region and the long-term impact the storm would have in the area.

“This storm has been incredible, not only here but all the way up the East Coast,” Biden said.

Biden told the officials — including Gov. John Bel Edwards, the CEOs of local hospitals and the energy company Entergy, members of Congress and local parish presidents — that he thought it was important to rebuild damaged infrastructure in a more resilient manner, whether it meant placing power lines underground or making roofs stronger.

Connecting the recent devastation to the impact of climate change, Biden pitched the $1 trillion infrastructure bill that recently passed the Senate with bipartisan support, as well as a $3.5 trillion social spending bill backed by Democrats, saying the latter “calls for significant investment in being able to deal with what is about to come.”

“Things are changing so drastically in terms of the environment,” the president said. “We’ve already crossed certain thresholds. We can’t build back a road, a highway, a bridge or anything to what it was before. I mean, you got to build back to what it is now, what’s needed now.”

He made the same argument during remarks on the street in LaPlace, standing before a large, uprooted tree.

In his remarks, Biden spoke of the need to restore cellphone service so that residents could get in touch with loved ones, and so that they could learn about resources available to them.

He also said that, reportedly, some insurance companies may deny coverage unless the homeowner was under a mandatory evacuation order; some parishes in Louisiana did not issue mandatory orders in time to help residents qualify, Biden said.

“No one fled this killer storm because they were looking for a vacation or a road trip,” the president said. “So, folks, they left their home because they left and they felt they had to flee the risk of death. There’s nothing voluntary about that. And so, I’m calling on private insurance companies: Don’t hide behind the fine print and a technicality.”

After visiting LaPlace, Biden was scheduled to take an aerial tour of particularly battered communities in the area, including Lafitte, Grand Isle, Port Fourchon and Lafourche Parish, according to the White House.

Later, he planned to travel to Galliano, Louisiana, south of New Orleans, to meet with local leaders there.

The White House has sought to project a strong federal response to the storm as the president suffers from public disapproval of his handling of another recent crisis, the U.S. withdrawal from Afghanistan.

During remarks Thursday, Biden told those in the Gulf region that “we’re all in this together.”

“The nation is here to help,” he said.

Ida and its remnants have left more than at least 63 people dead in eight states, including at least 49 in the Northeast.

Which states’ lawmakers have said they might copy Texas’ abortion law

RSS distances itself from article critical of Infosys