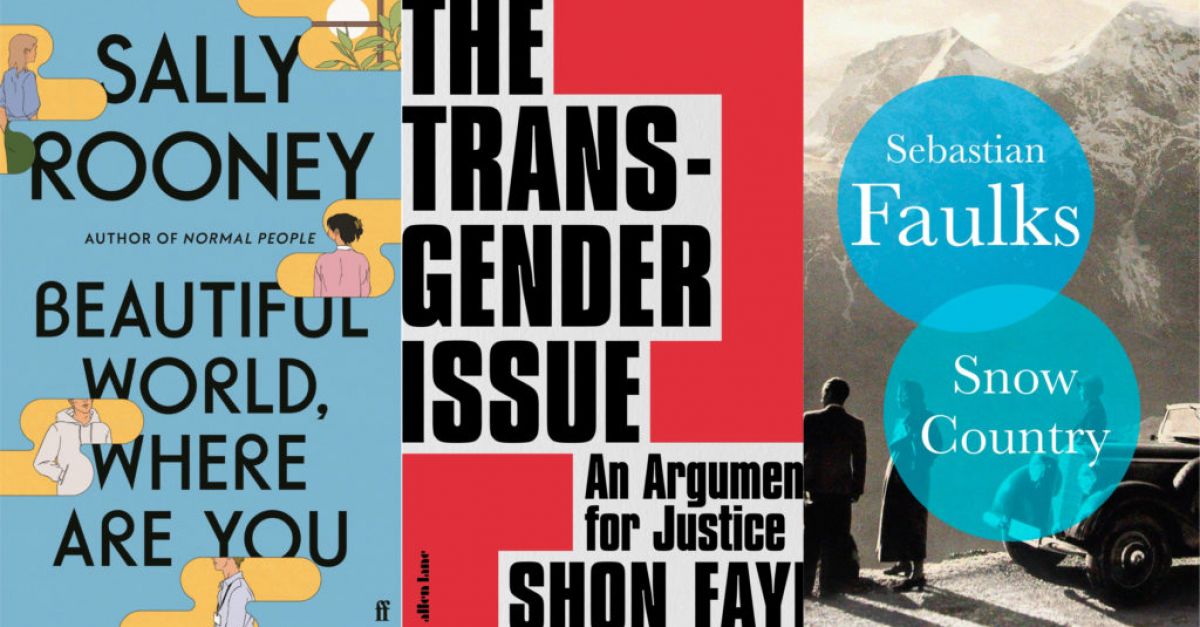 From Sebastian Faulks to Sally Rooney, some big names are releasing new books this week…

1. Snow Country by Sebastian Faulks is published in hardback by Hutchinson. Available now

And in case you couldn't quite see how wonderful the sprayed edges are, here's a little more for you… Pre-order your exclusive signed special edition of @SebastianFaulks's new novel #SnowCountry from @Waterstones now: https://t.co/O9TXL3RTLX pic.twitter.com/pKgqDjRknw

Snow Country returns to the Schloss Seeblick sanatorium in Austria, loosely following Faulks’ 2005 novel Human Traces. The clinic is as much a personality as the two main characters, Anton and Lena – he a journalist, fortunate enough to travel before being plunged into the German trenches of the Western Front, and she an impoverished, uneducated child of a prostitute looking for somewhere, or someone, to call home.

Through all the political turbulence, love and loss, Schloss Seeblick is a place of calm – both for the characters that end up there, and for us, through Faulks’ flawless prose. Snow Country’s pensive wandering expresses mental resilience and wistful yearning in a love story that struggles to bloom in the lugubrious period between two world wars.
8/10
(Review by Rebecca Wilcock)

2. Freckles by Cecilia Ahern is published in hardback by HarperCollins. Available now

Cecilia Ahern – best known for her debut novel PS, I Love You – is back with her latest offering, Freckles. Misfit country girl Allegra ‘Freckles’ Bird moves to Dublin to achieve her dreams, but as reality sets in, she realises she isn’t exactly who she hoped she would become. A tense encounter with a stranger sets her on a journey to uncover the five people who have made her who she is, and in pursuit, she begins to uncover what truly defines her.

This flavourful novel is fresh and timely, picking apart Allegra’s character thoughtfully without cliche or judgement. Asking boldly what and who make us who we are, Freckles manages to team wit and wisdom harmoniously – wrapped in a slightly-saccharine bow, as Ahern does so well.
8/10
(Review by Holly Cowell)

3. Beautiful World, Where Are You by Sally Rooney is published in hardback by Faber & Faber. Available now

Alice, Felix, Eileen and Simon are still young – will they find a way to believe in a beautiful world?#BWWAY pic.twitter.com/VvHfkoHTyp

The cult of Sally Rooney is so strong – her work has been adapted into an award-winning TV programme, and her style has inspired waves of new writers – it’s easy to forget the latest release is only her third book. Beautiful World, Where Are You is unmistakeably the work of Sally Rooney: but magnified to an extent it almost seems like a parody.

Alice – a famous writer who has moved to the seaside after a mental breakdown – and Eileen – her best friend living in Dublin with a nice but unfulfilling job – are the central characters, along with the two men in their lives: Felix and Simon. There’s not too much plot in the book – it’s more of a meditation on life when you’re in the tail end of your 20s, and every second chapter is a long email between the two women.

This format hinders the flow of the book – it feels like pages of self-indulgent musings about life, sex, capitalism and more. It’s heavy-handed and has none of the emotional heart of Rooney’s previous books. Megafans will no doubt find much to love – everyone else might be bitterly disappointed.
5/10
(Review by Prudence Wade)

4. The Transgender Issue: An Argument For Justice by Shon Faye is published in hardback by Allen Lane. Available now

Few books are as urgent as trans activist and journalist Shon Faye’s debut. She covers the dire situation facing the trans community today – whose existence, for some reason, has become the centre of constant cultural debate. The analysis is thorough and heartbreaking, from how trans people are treated in the press, by doctors, in prisons and taking into account the intersections of race and class.

Don’t expect too many gory details from Faye’s life and personal experiences – instead, it’s a highly fact-based book backed up with statistics and case studies, but she manages to write it in a hugely emotive and powerful way. Some readers might find the ideas feel quite radical – particularly discussion of abolishing prisons and capitalism – but Faye shows her workings in a clear and persuasive way.

The main worry is only people who broadly agree with Faye’s point of view will read this book – when in reality, everyone should. It’s ultimately quite a shocking a depressing read, but Faye has hope for the future – and maybe so should we. All we have to do is take action, now – because when trans people are accepted, we will all prosper.
9/10
(Review by Prudence Wade)

..Teach our kids about us, give them wings…

Superheroes! May we know them, teach on them, make them… pic.twitter.com/4gbmhNs7Pp

At school, performance poet Sophia Thakur says she “only saw black people in history textbooks, in chains”. This chunky celebration of talent is her riposte, celebrating people of colour who have succeeded in art, research, sport, science and food. After an introduction by Stormzy – who founded the #Merky Books imprint – full-page, comic-style portraits by Denzell Dankwah accompany a galvanising biography explaining how each person harnesses their power.

A particularly nice touch is how each description summons the subject’s personality: Katarina Johnson-Thompson’s bio puts us trackside during an explosive athletics event, while scientist Dr Mark Richards has a more measured, third-person tone. If read through in one go, the heightened language can get a bit much, so it’s better to dip in and out. With spaces to draw and write about your own superhero, there’s no end to the powers Thakur hopes to create.
8/10
(Review by Natalie Bowen)

Five expert-backed ways to bolster your immune system during autumn