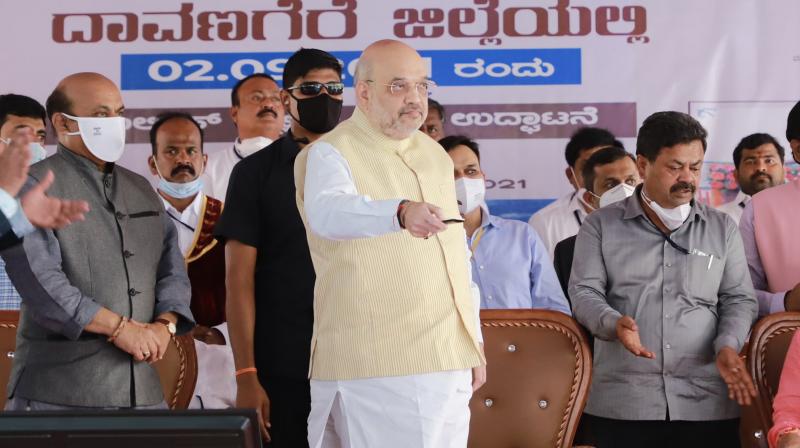 Shah on Thursday arrived in Karnataka for the first time after the change of guard in the state earlier in July. He was scheduled to inaugurate various development projects in Davanagere.

Addressing the people at the inauguration ceremony, he said the party decide to give Bommai the responsibility to be the new Chief Minister of Karnataka adding that BS Yediyurappa, the Chief Minister preceding him, did not leave any stone unturned for the development of Karnataka, especially villages and farmers, during both his stints.

The Union Minister further stressed that in Karnataka, an era of development started under the rule of the party and Yediyurappa.

He also said that Bommai took several small but important initiatives, like no salute from the police or doing away with many things related to VVIP culture. He also took several steps to ensure transparency.

The Union Minister launched various development projects at Davanagere in Karnataka on Thursday at a total cost of Rs 50 crore. He inaugurated the Gandhi Bhawan, the Police Public School and the GM Institute of Technology's central library in Davanagere.

He also felicitated Freedom Fighters and expressed gratitude towards them for their invaluable contribution in the country's freedom struggle.

Bommai and several other dignitaries were present on the occasion.