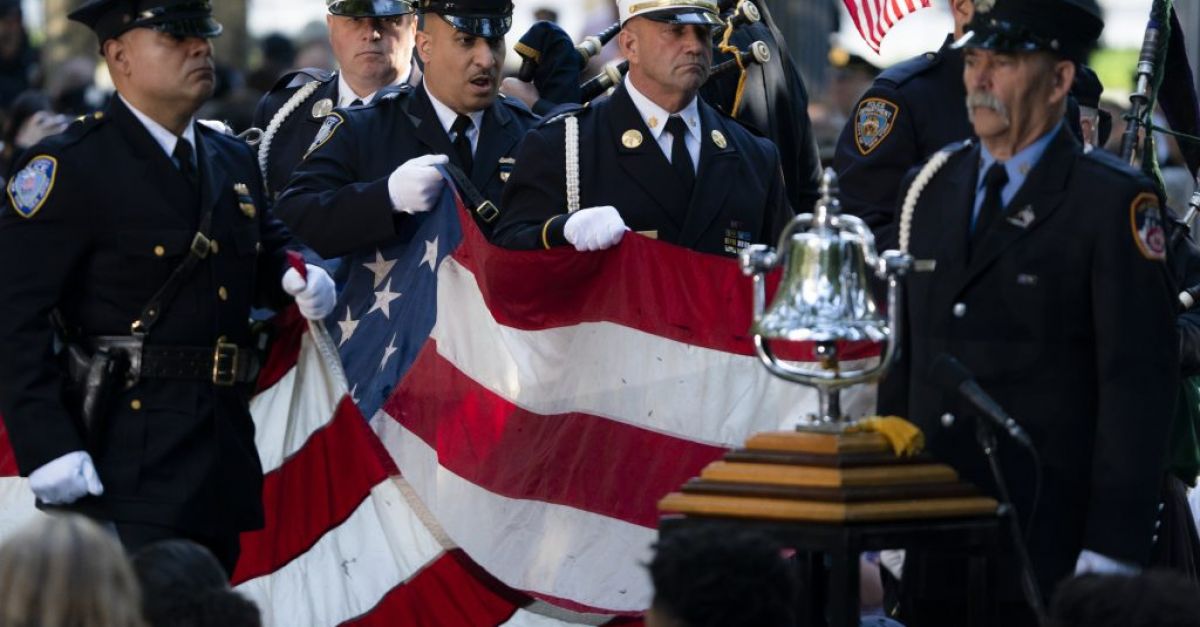 Millions of people across the US have solemnly marked the 20th anniversary of the September 11 terror attacks.

A ceremony at ground zero in New York City began with the tolling of a bell exactly two decades after the deadliest act of terrorism on American soil started with the first of four hijacked planes crashing into one of the World Trade Centre’s twin towers.

US president Joe Biden was joined by former presidents Barack Obama and Bill Clinton and a crowd of victims’ relatives and first responders for the ceremony at the 9/11 memorial plaza in the city.

The memorial stands where the the World Trade Centre’s twin towers were rammed and felled by hijacked planes.

Observances were also taking place at the the two other sites where the 9/11 conspirators crashed the jets: the Pentagon, and a field near Shanksville, Pennsylvania.

The anniversary arrives under the shadow of the coronavirus pandemic and the US withdrawal from Afghanistan – now ruled by the same militants who gave safe haven to the 9/11 plotters.

The US attacks killed nearly 3,000 people and marked the start of a new era of fear, war, politics, patriotism and tragedy.

In a video released on Friday night, Mr Biden mourned the ongoing losses of 9/11.

“Children have grown up without parents, and parents have suffered without children,” said Mr Biden, whose childhood friend is the father of a September 11 victim, Davis Grier Sezna Jr.

But the president also underlined what he called the “central lesson” of September 11: “That at our most vulnerable … unity is our greatest strength.”

Bruce Springsteen and Broadway actors Kelli O’Hara and Chris Jackson sang at the commemoration, but by tradition, no politicians spoke at the event.

The president placed a wreath at Memorial Plaza, home to the Wall of Names, where the identities of the passengers and the crew from that flight are inscribed in marble.

Mr Biden and first lady Jill Biden then walked with relatives of the crash victims into the grassy field when the jet came to rest.

He made no public comments during his time at the memorial.

Mr Bush, America’s leader on 9/11, spoke earlier at the site marking the place where passengers and crew on United Airlines Flight 93 fought to regain control of the plane, believed to have been targeted at the US capitol or the White House.

The former president said September 11 showed that Americans can come together despite their differences.

“So much of our politics has become a naked appeal to anger, fear and resentment,” he said.

“On America’s day of trial and grief, I saw millions of people instinctively grab their neighbour’s hand and rally to the cause of one another. That is the America I know.

“It is the truest version of ourselves. It is what we have been and what we can be again.”

Former president Donald Trump marked the occasion by visiting a fire station and police precinct in New York – where he criticised his successor for the way he pulled out of Afghanistan last month.

Speaking to officers, Mr Trump expressed surprise about why the Afghan withdrawal had not come up in other 9/11 memorial speeches.

“It was gross incompetence,” he said of the US exit.

Mr Trump was asked by the officers whether he plans to launch a comeback run for the White House in 2024 – or for mayor of New York. He said it was an easy decision that would make them happy.

“If I catch Covid it’s because of you,” Mr Trump said, as he posed for photos with police officers.

The former president plans to end the day in Florida, where he is providing commentary on a boxing match.

Other observances – from a wreath-laying in Portland, Maine, to a fire engine parade in Guam – are planned across a country now full of 9/11 plaques, statues and commemorative gardens.

Using hijacked planes as missiles, the assailants ushered in an age of fear by toppling the twin towers – an event people across the world saw unfold on live television.

Security was redefined across the west, with changes to airport checkpoints, police practices and the surveillance powers of governments.

In the years that followed, virtually any sizeable explosion, crash or act of violence seemed to raise a dire question: “Is it terrorism?”

Some ideological violence and plots did follow, though US security services and the public have lately become increasingly concerned with threats from domestic extremists after years of focusing on international terror groups in the wake of 9/11.

New York faced questions early on about whether it could ever recover from the blow to its financial hub and restore a feeling of safety among the crowds and skyscrapers.

New Yorkers ultimately rebuilt a more populous and prosperous city, but had to reckon with the tactics of an empowered post-9/11 police department and a widened gap between haves and have-nots.

The “war on terror” led to invasions of Iraq and Afghanistan, where the longest US war ended last month with a hasty mass airlift punctuated by a suicide bombing that killed 169 Afghans and 13 American service members, attributed to a branch of the so-called Islamic State extremist group.

US authorities are now concerned that al Qaida, the terror network behind 9/11, may regroup in Afghanistan.

Two decades after helping to triage and treat injured colleagues at the Pentagon on September 11, retired Army Col Malcolm Bruce Westcott is saddened and frustrated by the continued threat of terrorism.

Twenty years ago, nearly 3,000 lives were cut short by an unspeakable act of cowardice and hatred on 9/11. As a nation, we must never forget those we lost during one of the darkest moments in our history and the enduring pain of their families and loved ones.

“I always felt that my generation, my military cohort, would take care of it – we wouldn’t pass it on to anybody else,” said Col Westcott, of Greensboro, Georgia. “And we passed it on.”

For Angelique Tung, who was at the trade centre for a business meeting on 9/11 and escaped down 77 flights of stairs, the US pullout from Afghanistan stirred empathy for troops who served there.

Some now wonder whether their efforts and sacrifices made a difference, which makes Ms Tung think of a question she has asked herself since surviving September 11.

“I hope that, after 20 years, other people are asking that question: What good can come from this?”

September 11 propelled a surge of shared grief and common purpose, but it soon gave way.

Muslim Americans endured suspicion, surveillance and hate crimes. The quest to understand the catastrophic toll of the terror attacks prompted changes in building design and emergency communications, but it also spurred conspiracy theories that seeded a culture of scepticism.

Schisms and resentments grew over issues such as immigration, the balance between tolerance and vigilance, the meaning of patriotism, the proper way to honour the dead, and the scope of a promise to “never forget”.

Thea Trinidad was 10 when she overheard her father, Michael, saying goodbye to her mother by phone from the burning trade centre.

As she prepared to read victims’ names at the ceremony at ground zero in New York, she said: “It’s hard, because you hoped that this would just be a different time and a different world. But sometimes history starts to repeat itself and not in the best of ways.”

Ms Trinidad remembers the pain but also the fellowship of the days that followed, when all of New York “felt like it was family”.

Today we honor the nearly 3,000 men, women, and children who died on September 11, 2001, and the heroes who have always run towards danger to do what’s right. Let’s never forget that day, and let’s never take them for granted. pic.twitter.com/VkN11wZAMh

Ms Trinidad, who now lives in Orlando, Florida, said: “Now, when I feel like the world is so divided, I just wish that we can go back to that.

“I feel like it would have been such a different world if we had just been able to hang on to that feeling.”