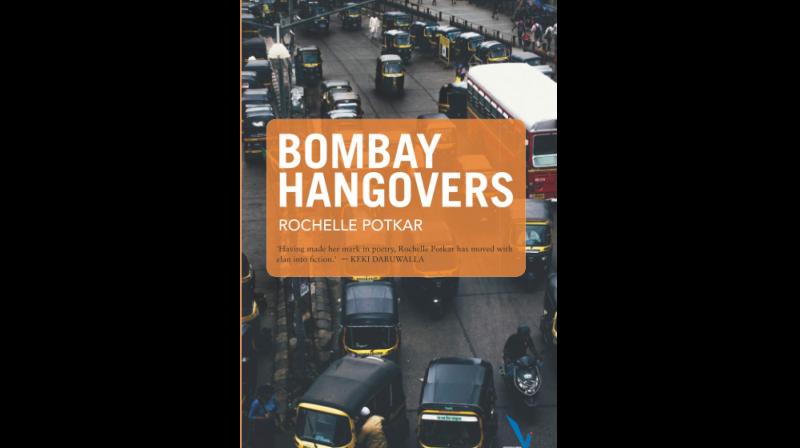 Rochelle Potkar’s new short-story collection Bombay Hangovers (Vishwakarma Publications, 2021) broods over Bombay and its residents who closely knit to the fabric of the city, yet assertive of their distinctness. The format of using the city as an anchor, more so, Mumbai, is not new with notable collections — Bombay, Meri Jaan: Writings on Mumbai (Penguin, 2018) by Jerry Pinto; Coming Back to the City (Speaking Tiger Books, 2019) by Anuradha Kumar; No Presents Please (Harper Perennial, 2018) by Jayant Kaikini and Tejaswini Niranjana — however, Potkar does not fail to astonish us, with her stories rarely dealing with these already done-and-dusted themes. Rather, she digs deeper, and tells us about lives of people living at seams with her nuanced telling, suffused with bursts of lyrical writing.

In these sixteen stories spanning over 200 pages, she sneaks into the gravelly lives of people, alone and dejected, living passively like grains of sand, like Joe Pereira in the story “The Metamorphosis of Joe Pereira”. For him, taking an “action” — of thrashing coconut-gatherers in lungis who have arrived again to take the coconuts from his tree — becomes his metamorphosis. Then, there is Jon, in “Noise”, who one fine day leaves the city and is never heard from again. The impact of a city on his life intersects with its overarching, claustrophobic presence in these lines:

“Sometimes, Jon would hear the city crowding in his breath, his beating heart, and ears. The machines making soft, ricocheting noises printing and xeroxing in the blur of ticks, clicks, telephone ringing sounds, snippets of conversations—all urgent and important, but disjointed—irrelevant the next day. He turned over to his other side now in his sleep and those sounds vanished.”

I liked “Parfum” the best — the protagonist, Russi, owner of the perfume shop at Peddler Road, associate people, emotions, and colours to the smell they emit:

The story moves slowly — his marriage with Marinette, “an embodiment of the smells he liked”, their fading love as he realises she doesn’t have any smell of her own, and his eventual liking for Stella whose hand he uses to sniff his self-made perfume instead of a blotting paper. The character-sketch of Stella grabs a reader’s attention:

“Stella sat on the stool, as still as a terracotta doll. She was the colour of glazed clay… Then at 18, she left the orphanage because in spite of being mute and muffled, some saw her as a woman.”

Like this story, two other stories — “The Arithmetic of Breasts” and “The Scent of Conscience” — use the desires and their blurred boundaries as their central theme.

In a short story, where each word should move the story further, Potkar uses compression, striking a fine balance between what is revealed and what is concealed. She doesn’t use the city as mere geography, but there is often a profound sense of place, its cartography being explored by memory, the use of local parlance, way of delivery, and technical jargon.

The disadvantaged and brutalised placed at different localities of the city don't have tidy trajectories, but often at the end, they can wade through the gashing waves of oppression and create mild ripples — Kailas, in “Fabric”, who has been sacked due to the closing down of his cotton mill in Byculla; A rape victim, in “Morning”, who copes with the trauma by remembering her past; the prostitutes fighting for food in the dehumanising brothel of Kamathipura, in the “Mist”.

For any reader who has heard of the city only through the narration, Potkar’s book with its exquisite use of catalogue, language that soothes and stabs, and sharp observations, is a sumptuous read.

Book Review | Rare and inspiring accounts from the 1971 war theatres

How to arrange a hen party without losing your cool

9/11 anniversary: The best documentaries to watch, 20 years on