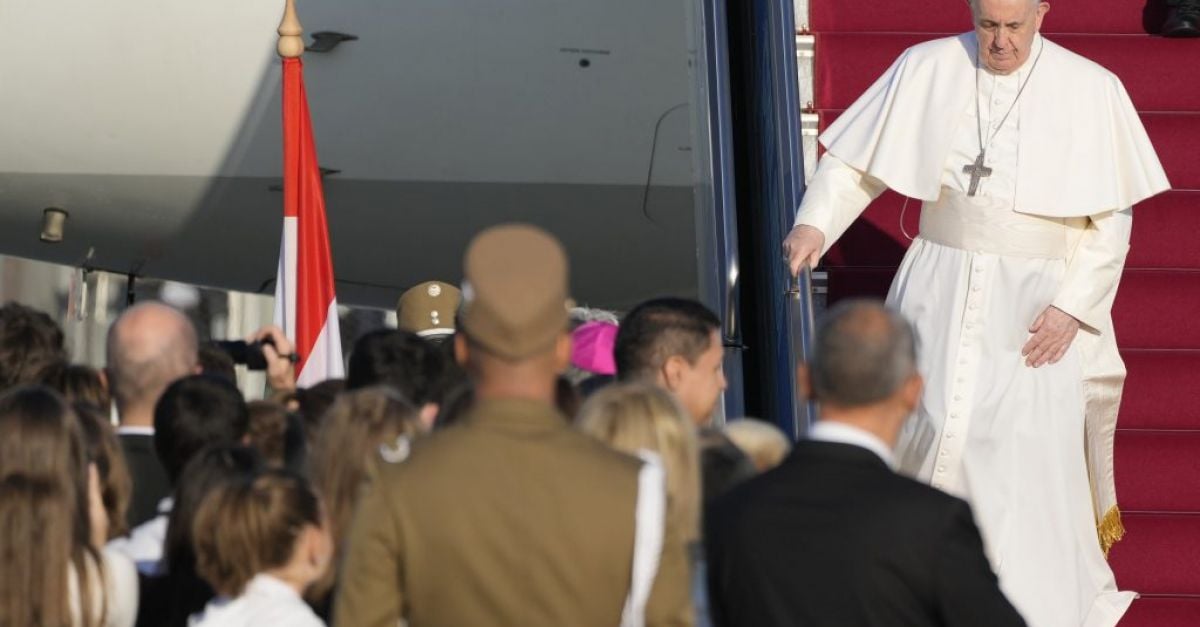 Pope Francis arrived in Hungary at the start of his first big international outing since undergoing intestinal surgery in July.

He will celebrate a mass and meet with prime minister Viktor Orban, whose right-wing, anti-immigrant policies clash with Francis’ call for countries to welcome refugees.

Francis’ arrival at Budapest airport on Sunday opened his four-day trip primarily to Slovakia with a seven-hour stop on Sunday in the Hungarian capital.

He is passing through Budapest to celebrate the closing Mass of an international conference on the Eucharist, though he will also meet with Hungarian religious figures and Hungary’s president and prime minister.

Organisers expect as many as 75,000 people at the Mass in Heroes’ Square, which is going ahead with few coronavirus restrictions even as Hungary, like the rest of Europe, is battling infections fuelled by the highly contagious Delta variant.

Tomorrow I begin my #ApostolicJourney to Budapest and Slovakia. I ask everyone to accompany me in prayer, and I entrust this visit to the intercession of so many heroic confessors of the faith, who, amid hostility and persecution, bore witness to the Gospel in those places.

Despite pleas from the Hungarian Chamber of Doctors, congress organisers decided not to require Covid-19 vaccinations, tests, masks or social distancing for attendance.

Organisers, however, said they had ordered 30,000 masks to distribute as well as hand sanitiser, and urged all attending to be prudent.

During the flight from Rome, Francis seemed in good form and stayed so long greeting journalists at the back of the plane that an aide had to tell him to get back to his seat because it was time to land.

Francis said he was happy to be resuming foreign trips again after the coronavirus lull and then his own recovery this summer from surgery to remove a 33-centimetre section of his colon.

“Bad weeds never die,” he quipped about his recovery, quoting an Argentinian dictum.

The Vatican and trip organisers have stressed that Francis has only been invited to Hungary to celebrate the mass, not make a proper state and pastoral visit as he is doing in Slovakia.

But Francis and Mr Orban disagree on a host of issues, top among them migration, and Francis’ limited stay in Budapest could indicate that he didn’t want to give Mr Orban’s government the political boost of hosting a pope for a longer pilgrimage before the general election next spring.

“At the beginning there were a lot who were angry (that Francis wasn’t staying longer), but now I think they understand,” said the Reverend Kornel Fabry, secretary general of the Eucharist conference.

He noted that a majority of Hungarians back Mr Orban’s migration policies, “that we shouldn’t bring the trouble into Europe but should help out where the trouble is”.

Mr Orban has frequently depicted his government as a defender of Christian civilisation in Europe and a bulwark against migration from Muslim-majority countries.

Francis has expressed solidarity with migrants and refugees and criticised what he called “national populism” advanced by governments like Hungary’s.

He has urged governments to welcome and integrate as many migrants as they can.

Still, religious commitment in Hungary lags behind many of its neighbours.