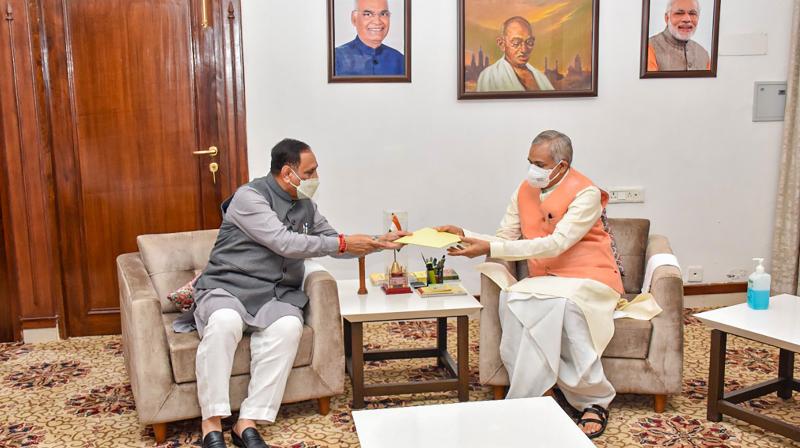 New Delhi: Just like his predecessor Anandiben Patel, Gujarat chief minister Vijay Rupani on Saturday tendered his resignation, in a sudden political development more than a year before Prime Minister Narendra Modi’s home state is due to hold Assembly elections. In a state where the BJP has been ruling since 1998, Mr Modi remains the only BJP CM since then to complete full term in office, whose term is also considered as the benchmark for all his successors. Gujarat becomes the third state, after Uttarakhand and Karnataka, where the BJP top brass has favoured a leadership change, something it was perceived to be against during the Modi government’s first term.

Assembly polls are due in Gujarat by the end of next year. The BJP had won 99 Assembly seats out of total 182 in 2017, bringing down the tally from 115 it had won in 2012. The Congress had increased its tally from 57 to 77 in 2017. Ms Patel, now the governor of UP, had announced her resignation in 2016 through the social media after completing 75 years, an unofficial age bar in the BJP on holding any constitutional post. The late Keshubhai Patel, who was the BJP chief minister in 1998, was forced to resign in 2001 soon after the Bhuj earthquake.

For many, a “soft spoken” Mr Rupani seemed “not suitable” for the post when the Opposition, including the Congress, has leaders who are known for indulging in aggressive politics.

With Mr Rupani’s resignation, the Opposition camp in the state claimed that the BJP top brass was forced to go in for leadership change because of “anti-incumbency” against its state government. The Gujarat unit was rife with speculation that the decision was to check the rift between the government and the organisation and also to take “corrective measures” after a survey predicted that the BJP may face more trouble than in the last Assembly polls due to “non-performance” in some areas, including Covid-19 management during the second wave of the global pandemic. Speculation is also rife that at least six “non-performing” ministers in the Rupani Cabinet will not be included in the new chief minister’s team.

With both the OBC and Patel vote banks crucial in the state, it would be interesting to see who the BJP top brass decide on as Mr Rupani’s successor while there is a growing demand for an OBC census.

The names of Union ministers Mansukh Mandaviya and Parshottam Rupala are doing the rounds as possible successors, along with deputy chief minister Nitin Patel, state BJP vice-president Gordhan Zadaphia, Daman and Diu administrator Praful Khoda Patel and state minister R.C. Faldu. The BJP legislature party is likely to meet either on Sunday or Monday to take a call on the matter.

Gujarat BJP spokesman Yamal Vyas said in Gandhinagar that a meeting of BJP MLAs “will be held soon, possibly tomorrow”. Rejecting the buzz that he was in the race for CM, BJP state unit chief C.R. Patil said: “I am not in any competition for the post of chief minister.”

After submitting his resignation to state governor Acharya Devvrat, Mr Rupani said while addressing the media: “In the BJP, there has been a tradition that the responsibilities of party workers change from time to time. I will be ready to take whatever responsibility the party gives me in the future.”

He went on to add: “I was allowed to serve the state for five years. I have contributed to the development of the state. I will further do whatever is asked by my party.”