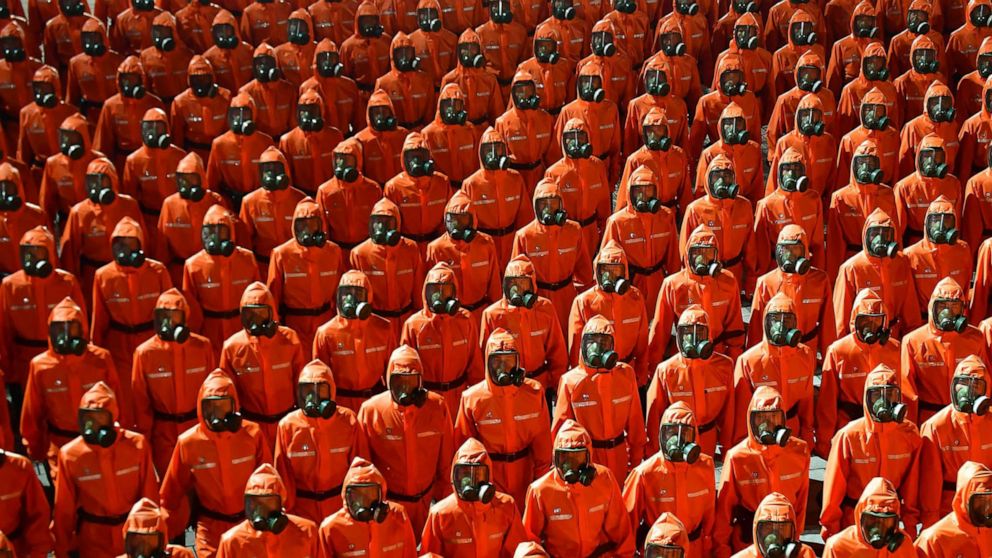 Along with top officials, a noticeably thinner Kim Jong Un appeared in the square, where he “extended warm greetings” and waved to the crowds, KCNA reported. Parachutists came down from the sky, there was a fireworks display and tractors hauled artillery behind soldiers, the news agency reported, though photos depict only fire trucks and tractors.

But the image of a strong, healthy regime painted by the country’s state media is the opposite of what the parade truly showcased, according to Gordon Chang, author of “Nuclear Showdown: North Korea Takes on the World.” The parade indicated a much less ambitious North Korea, Chang said, one that has been decimated by the coronavirus pandemic despite zero cases reported by the country.

“All those guys in the red hazmat suits, which were really striking, that wasn’t directed to us, that was directed to the North Korean people basically saying that the regime has this well in hand because it obviously doesn’t,” he said.

The pandemic and international sanctions have damaged the economy and caused widespread famine. In July, South Korea’s central bank released its 2020 economic estimates for its northern neighbor, finding that North Korea’s economy shrunk by 4.5% last year — the largest decrease in at least 10 years, according to the report.

Photos of Kim at the parade also showed that his weight loss has continued since he began slimming down this summer.

Martyn Williams, a researcher at 38 North, which provides analysis about the country, tweeted that “It’s striking how much healthier Kim is looking in these photos from yesterday. However he is doing it — and there are theories — he looks a lot better than he did a few months ago.”

Chang also speculated as to why Kim had lost weight.

“I think he’s either realized it doesn’t look good from a public relations point of view to be overly heavy, or he’s just dealing with a personal health problem,” he said.

Aside from the apocalyptic looking hazmat suits, the parade lacked North Korea’s signature missile display, which Kim uses to boast about his regime’s military might, sending a message to the U.S. and the world.

This was the nation’s first military parade since President Joe Biden took office. North Korea has been very quiet on the international scene in recent months — which is very uncharacteristic, according to Chang.

“They have been very, very quiet for a long time which means we should start to worry about what’s going on because something is not right,” he said.