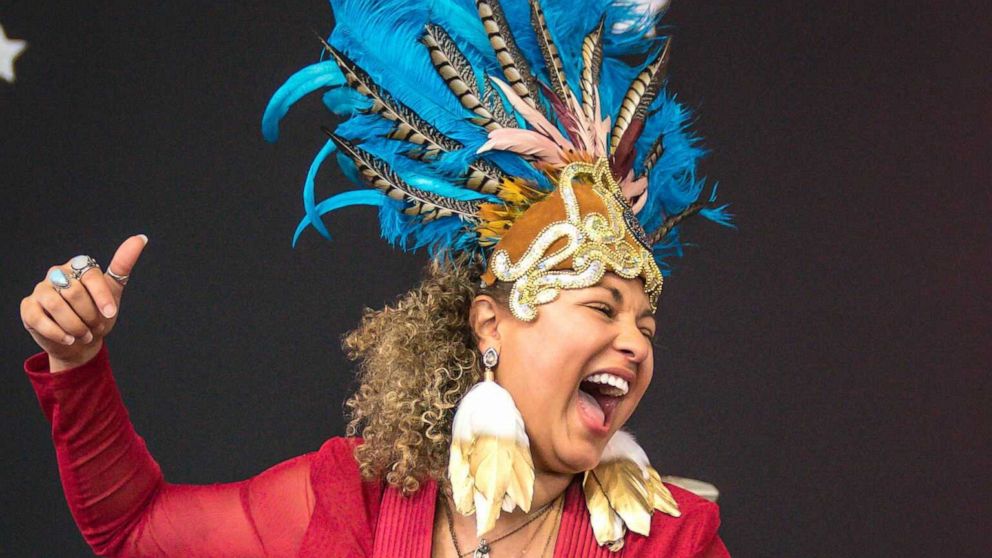 This report is a part of “America Strong,” an ABC News series highlighting stories of strength and resiliency across the nation.

As Hurricane Ida wreaked havoc in New Orleans, it swept away a historic jazz landmark that Louis Armstrong once considered a second home.

The Karnofsky Tailor Shop and Residence, which was built in 1913, collapsed after water pooled on its roof. According to the National Park Service, a young Armstrong worked for the family who owned the shop and loaned the future jazz legend money to buy his first cornet — a brass instrument that resembles a small trumpet.

“That is another devastating blow to the community, so much history there [that] once again, a hurricane has come in and just kind of washed away,” Kia Robinson, the director of programs and marketing at the New Orleans Jazz and Heritage Foundation, told ABC News.

Ida destroyed homes and businesses, knocked out power to more than 1 million residents and left at least 82 people dead. It hit Louisiana as a Category 4 hurricane on Aug. 29 — almost exactly 16 years after Hurricane Katrina ravaged the city that is known as the birthplace of jazz.

Before Ida, the jazz community was already reeling from the ongoing pandemic, which has shut down music venues, canceled shows and left many in the music community without an income or a lifeline.

“New Orleans is very much so a gig town, you know, people work performance to performance, gig to gig, so a lot of our musicians don’t have a safety net,” Robinson said.

When the pandemic hit in March 2020, Robin Barnes Casey, known as the Songbird of New Orleans, lost all of her bookings, and all of her international tours as a cultural ambassador to the city were canceled.

At the time, she and her husband, musician Pat Casey, who perform as the duo LoveBirds, had just become new parents to baby Riley.

“All of a sudden, everything we could do financially [to support our family] was just stopped,” Barnes Casey said.

“It was definitely mentally, emotionally an exhausting time and then also being brand new parents, we had a challenge and a blessing,” she added.

As COVID-19 vaccines became widely available this spring, some musicians were able to book some gigs again. But amid a surge in cases in Louisiana and the emergence of the delta variant, the city again had to take a step back.

Gov. John Bel Edwards reinstated the mask mandate in August, and large gatherings like the New Orleans Jazz and Heritage Festival, which was scheduled to run in October, were canceled again this year.

“COVID took away all the gigs, [and] then the hurricane comes in, not only taking the gigs or prospects of gigs away, but it’s destroyed your property,” Douget told ABC News as he helped his parents deal with hurricane damage to their home.

The Jazz Foundation of America deployed teams of volunteers to assess needs and provided financial assistance to thousands of musicians — from direct payments to fulfilling need-based requests, most recently providing those who lost power during Ida with generators and fuel tanks.

“We have a long history, a long and painful one, of working with musicians in Louisiana and throughout the South during these natural disasters,””Jazz Foundation of America executive director Joseph Petrucelli told ABC News.

The Jazz Foundation of America raised over $2 million for its COVID-19 relief fund, while the New Orleans Jazz and Heritage Foundation supported more than 2,500 in the Louisiana jazz community through grants.

“During 2020 we assisted more musicians and more families across the country than we did in any year previous,” Petrucelli said. “This was because we’re dealing with such widespread deprivation and devastation and loss of work that the need was really universal.”

When Katrina struck New Orleans in 2005, Barnes Casey was 17, and as she left her home in New Orleans amid the destruction, she found hope in music.

“Music has always been my salvation and my therapy and my happiness,” she said. “I survived mentally through Katrina because I listened to music all the time.”

This is why, despite all of the roadblocks before them, the Caseys — along with thousands of other musicians — were determined to keep the music going, despite the pandemic and despite Ida, through uplifting virtual performances.

And according to Petrucelli, many were able to raise relief funds to support the music community through their efforts. “There’s just been so much, so much goodwill and kindness,” he said.

And the sorrows for the jazz community amid the pandemic have been immense. The human toll of the virus touched every corner of the jazz world as dozens of jazz musicians and producers died of COVID-19, including New Orleans jazz legend Ellis Marsalis.

For Douget, Marsalis’ death in April 2020 was particularly painful.

Douget was a member of the Ellis Marsalis Quintet for 25 years and first met Marsalis when he was 17. He considered him a mentor and a friend.

“He was a true intellectual, just intellectually curious all the way to the end of his life. Losing him was devastating,” Douget said. “He was like a father figure to me and to a lot of the musicians, particularly the ones that played in his band.”

Even amid great loss, Barnes Casey said the resilient spirit of New Orleans and its music community continues to uplift.

“Despite that’s all going on, [New Orleans] is such a unique place, because we celebrate life so much. We even, you know, we celebrate funerals, but it’s more about celebrating the life that we’re sending off,” she said.

And in that spirit, Douget continues to teach the next generation of musicians, carrying on the legacy of greats like Marsalis who dedicated their lives to jazz education.

“They had a profound influence on my life,” Douget said. “They showed me that, of course, learning your instrument and learning the craft, all that is important, but it’s just as important to pass it along to the next generation of young people. And that’s what their lives were about. That’s what they did. And I tried to basically model my life on theirs.”