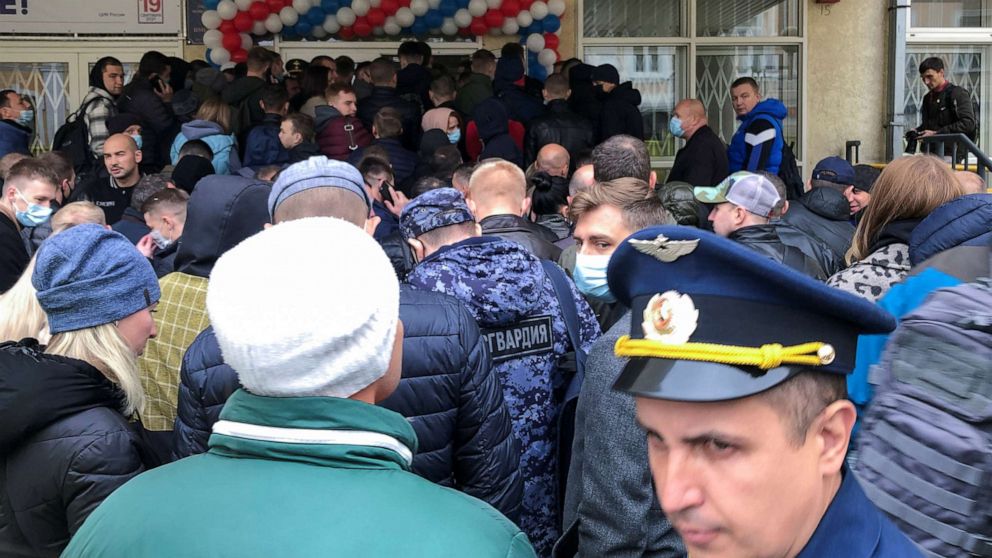 MOSCOW — In St. Petersburg’s municipal elections this week, Boris Vishnevsky is running against himself. But that does not mean he has no challengers. Far from it, in fact.

The veteran anti-Kremlin opposition politician is running against two men who have legally changed their names to be the same as his. They have even altered their appearances on the ballots, adopting beards to resemble him.

It is an update on a long-running tactic in Russian elections, known as “a double,” where authorities try to siphon votes away from an opponent by putting up candidates with the same name in the hope confused voters will put their mark next to the wrong person on their ballot paper.

Vishnevsky filed a complaint to the elections commission but it was rejected. He said had faced similar tactics before, but not at such lengths.

“We’ve simply never had such a thing before,” Vishnevsky told ABC News in an interview last month. “We’ve had situations before where they’ve put up people with the same last names in elections, but before this we’ve never had someone changing their last name and first name.”

The clone candidate ploy—which is being used in multiple races in Moscow too—is just one of a torrent of alleged dirty tricks, manipulation and crude repression being deployed around Russia’s parliamentary elections that are taking place this weekend and that the Kremlin is determined will produce a convincing result for its ruling party. The three-day vote, which starts Friday, decides seats in Russia’s lower house of parliament, as well as in regional and local councils.

Russia’s elections are heavily managed and as usual the outcome is not in doubt: President Vladimir Putin’s ruling party, United Russia, will keep its constitutional majority in Russia’s 450-seat lower house, known as the Duma. A handful of parties, vetted by the Kremlin, make up the rest.

But the environment these elections are happening in is different, coming as Russia has rapidly slid over the past year from authoritarianism to something far closer to a full-fledged dictatorship, where no real political opposition is tolerated.

Authorities have blocked opposition candidates on a broad scale, introducing new procedural and legal barriers or, in some cases, simply jailing or driving them out of the country with the threat of arrest.

This time, anti-Kremlin candidates who once would have been tolerated on the ballot have no place. In June, Dmitry Gudkov, one of the opposition’s best-known politicians, left for exile in Ukraine, saying he and his family had been threatened with jail. Even the traditionally tame opposition parties have come under attack, in particular the Communist Party, which saw one of its top leaders, Pavel Grudinin, barred from running.

“Faster and faster democratic progress is devolving into dictatorship,” said Darya Artamonova, a 19 year-old candidate running in municipal elections in a suburb in the Siberian city of Novosibirsk, one of the only opposition candidates permitted on the ballot there. During the campaign she told ABC News her parents were sent a funeral wreath expressing condolences for her death, an obvious threat.

In the past 18 months, the Kremlin has launched a broad campaign of repression larger than anything in Putin’s 20-year rule. Critics and independent analysts say the campaign is aimed at squeezing out organized dissent in the country.

That has included outlawing the movement of Alexey Navalny, Putin’s best-known opponent who authorities jailed in January after he survived a nerve agent poisoning. A new law bans anyone associated with Navalny’s organizations from running for office for five years.

An arsenal of new laws has given authorities broad capabilities to jail or block critics from the vote. Safeguards to prevent ballot stuffing have also been weakened: Authorities have pushed people to vote online, a tactic critics say will facilitate rigging. Holding the vote itself over three days also makes monitoring more difficult. Russia’s election commission this year will also not live-stream CCTV from voting stations.

Moreover, the campaign has targeted independent media. Authorities have designated most of Russia’s leading independent news sites as “foreign agents,” a label that imposes restrictions and opens reporters up to risk of criminal prosecution. A top election monitoring group, Golos, has also received the same designation.

The intense control around the elections, analysts said, reflects the Kremlin’s concerns that the ruling party United Russia is polling at below 30%, a historic low.

In Russia, where the parliament is effectively a tame extension of the Kremlin, the main purpose of elections is about producing a big result for United Russia to validate Putin, according to Andrey Kolesnikov, a senior fellow at the Carnegie Moscow Center.

“They are not about political representation,” Kolesnikov wrote in an article this week. “What will happen over the three days of September 17–19, 2021, is more of a confidence vote on Putin and his regime.”

To boost the result, authorities have been pressing state employees and military personnel to register to vote, with some state organizations telling staff they must persuade at least two others to do so too. On Friday, long lines appeared at some polling stations in Moscow, a sign critics said of state workers being obliged to go vote. At one station in the central Arbat neighborhood, a man in a line told ABC News many of those waiting were soldiers from a nearby defense ministry headquarters building. Moscow’s elections commission later confirmed the queue was being caused by military personnel voting.

Navalny’s team is seeking to exploit United Russia’s unpopularity. His group has launched a tactical voting campaign known as “Smart Voting.” The campaign calls for people to vote for any candidate with the best chance of beating United Russia’s, regardless of who they are. This week Navalny’s team published a list of candidates—the majority from Russia’s Communist Party—it recommends people should vote for.

The authorities have moved to block the tactical voting campaign, forcing Russian search engines to remove “Smart Voting” from their searches.

On Friday, Apple and Google deleted Navalny’s app from their stores in Russia, under pressure from Russia’s government. In a letter published by Navalny’s team, Apple said it was obliged to because Navalny’s organization is banned as extremist and that authorities allege it illegally enables “election interference.”