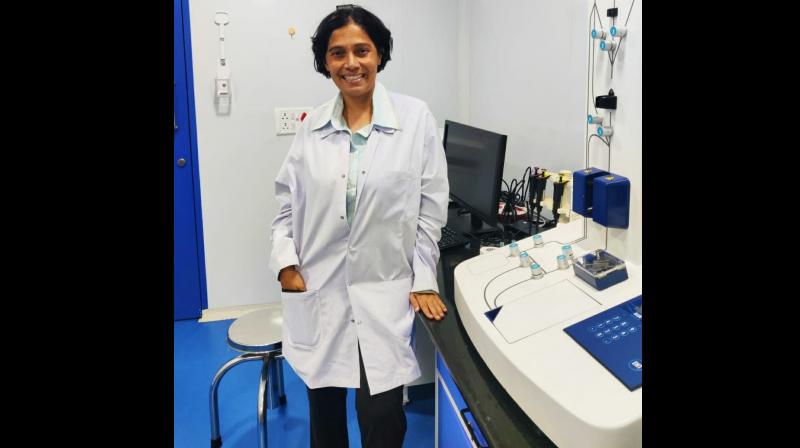 Years ago, a little girl dreamt of mastering the power to heal people’s sufferings, not as a clinical doctor but as someone who’d be even more powerful. As she grew up and found that even doctors depended on scientific research and advances, Hyderabad-based Subhadra Dravida decided to become a discoverer, with science as her weapon.
Despite her father and sister being lawyers and brother a chip designer, Subhadra became a scientist specialising in stem-cell research.

An alumnus of Osmania University and Pondicherry Central University, Subhadra has conducted extensive research and projects on stem cells in Canada, the US and the Centre for Cellular and Molecular Diseases (CCMB) and LVPRI, Hyderabad.
Possessing an enterprising outlook, the 42-year-old did not want to confine herself in the laboratory, preparing data and theses. Instead, she decided to translate all the data and theory to real-time application. It was just a matter of time that the scientist-turned-entrepreneur became the founder and CEO of the biotech company, ‘Transcell Biologics’ and its subsidiaries ‘Oncologics’, and a stem cell bank called ‘Biolife’.
The scientist-cum-entrepreneur, who has many patents to her credit and is fond of reading, especially non-fiction books, has also been the recipient of awards including Indian Leadership Award for National Development and Indo-Russia Bridge Innovation Entrepreneur Accelerator Award.

Recently, Subhadra undertook pioneering work in developing a stem-cell-based strategy. It aimed to predict the neurovirulence risk at the production level of a vaccine to prevent their adverse neurological outcome on people and to ensure it’s safe for vaccinating healthy population before a batch of vaccine releases in the market.
Interestingly, this time-and-cost-effective precise method called NeuroSAFE does not require animals for testing — unlike the usual monkey neurovirulence test. Thus, it saves lives of thousands of primates. Additionally, the prediction score of the test is relevant to human species.
The similar cruelty-free, stem-cell based strategy can be applied to detect neurovirulence risk of many other vaccines and not just COVID, including polio, measles, mumps, rubella, varicella or chicken pox, small pox, yellow fever, rotavirus, dengue and influenza.

After various COVID-19 vaccines came into the market with several mutant strains detected periodically, sporadic cases of vaccine reaction have been reported all over the world, including GB syndrome and deaths. Whether the vaccines use an attenuated virus or live mRNA virus or inactivated adenovirus, all types of COVID vaccines work by structurally or functionally mimicking the spike protein that’s proven to be adversely affecting the central and peripheral nervous system.
Neurological distress can lead to short, long or permanent damage to the brain, GB syndrome, paralytic stroke and memory loss, thus impairing one psychologically and physically.
Subhadra, who has published her research on NeuroSAFE methodology in the journal Pharma Focus Asia, found out that apart from the normal stem cells uses for treatment of diseases especially blood-related cancers and repair or regenerate damaged tissues, its special configurations can also be applied for testing the safety and efficacy of drugs and vaccines (also called adverse effects following immunisation or AEFI in India). Using NeuroSAFE technique, the test time can be drastically reduced from 28 days (in case of the currently prevalent monkey neurovirulence test) to just a few hours.
Moreover, as it does not require experimental animals or biopsies, it obviates the ethical dilemma.

How the NeuroSAFE strategy works

Subhadra elaborates on the NeuroSAFE methodology, telling us that it is a software powered by artificial intelligence (AI) and machine learning (ML), developed and trained on data sets, acquired from induced pluripotent (ability to become neurons, heart cells, liver cells upon induction) stem cell based systems.
“The stem cells have been harvested from biological discards and converted to pluripotent cells. The raw material availability is a crucial factor in developing NeuroSAFE, which is adequately available,” she adds. “The vaccine batch specific test material is added on to the stem-cell-based configured platform provided to the user, incubated as per the instructions and any induced neurovirulent pattern is picked by the trained software to predict the score. The report thus generated is part of the manufacturer’s quality control machinery.”

What the future holds

Speaking about her future plans, Subhadra adds that her company has partnered with Wipro. “It is towards developing NeuroSAFE as a workstation solution and to reach the US, Europe and Indian user markets. Besides, on 24th September, we’ll also be inaugurating a new classified lab facility in Hyderabad for handling productised solutions from Transcell Oncologics,” she states.