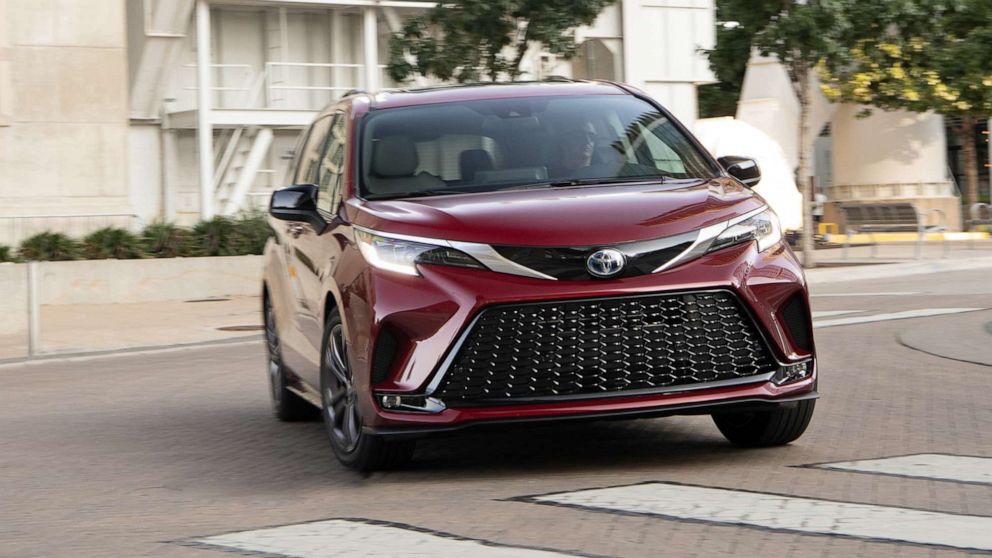 Amit Shah’s three children were cheering him on from the second row as their 2018 Honda Odyssey minivan quickly gathered speed on the Palisades Interstate Parkway. They were running late so Shah did what was necessary: Pedal to the metal.

“We overtook a McLaren,” Shah, a longtime fan of minivans, said with a laugh. “My kids were excited.”

Shah could not convince his wife to buy a minivan even as their family grew in size. That all changed when they rented one on a trip to California a few years ago.

“We thought it was so much easier to load and unload than my Durango [SUV],” he told ABC News. “The Durango is not as versatile as the minivan, which drives better. The Odyssey is also more comfortable.”

In Shah’s town of Englewood Cliffs, New Jersey, parents haul their kids to school in Range Rovers, Cadillac Escalades and giant SUVs. But when Shah arrives in his Odyssey, he’s a local celebrity.

It was the Chrysler Pacifica that convinced Car and Driver senior editor Ezra Dyer and his wife to ditch their Lincoln MKT crossover permanently for a minivan.

“My wife and I were like, ‘Why are we too cool for this awesome level of convenience? Why are we denying ourselves this?'” he told ABC News. “I had a kid for 10 years before I had a minivan. I wish I had this moment of enlightenment sooner.”

The Pacifica’s sporty looks and red interior even persuaded Dyer’s sister-in-law to buy a matching minivan one week later. The plug-in hybrid Pacifica gets 30 miles in full electric mode, Dyer said, perfect for ferrying his two kids and two dogs around town regularly.

“Even the dogs like the Pacifica better,” he said. “Until you experience one, it’s hard to appreciate minivans.”

And the shortage of Pacificas in showrooms may be a sign minivans are experiencing a comeback, Dyer noted.

“Minivans are undercover cool,” he said. “There could be a bigger future for minivans than there is now.”

Toyota relaunched the Sienna minivan, now in its fourth generation, last year with a hybrid powertrain and all-wheel-drive option. Sales have already reached 75,000 units so far and Tripp expects that number to top 100,000 by December.

“We’re very happy with the launch of this 4th generation Sienna. Toyota never thought about scraping it,” he told ABC News. “We strongly believe in this segment.”

“We really learned with the third generation that if we had the right packaging and styling, people would be excited to drive it — not ashamed or embarrassed,” he said. “We had to get the styling right.”

Honda’s Odyssey reigns as the best-selling minivan in the last decade. The Japanese automaker has sold more than 510,000 units in the last five years and nearly 3 million since its debut 26 years ago — making the Odyssey Honda’s second best-selling light truck of all-time. Odyssey owners are also some of the youngest in the brand; only the Civic attracts a younger buyer.

Rory Carroll, editor-in-chief of Jalopnik, was blown away by the Odyssey after driving it for a week in Michigan with his family. The minivan’s suite of safety systems — including its child surveillance cameras — impressed him most as a dad.

“Honda has a camera back there that monitors [passengers] so the driver doesn’t have to take their eyes off the road. That feature alone would be a big selling point for parents,” he told ABC News.

Multiple-passenger vehicle sales accounted for 1.9% of the U.S. market in 2020, according to IHS Markit. Carroll said he does not understand why so few American families drive minivans. They’re more spacious and practical than an ute and a lot easier to enter and exit — especially for adults. Plus, today’s minivans hardly resemble the boxy vans from decades ago.

“The Pacifica has an unexpectedly beautiful minivan shape … it’s shocking how good-looking it is and aerodynamic,” he said. “Kia’s Carnival very explicitly looks like an SUV to attract people who would buy a crossover.”

He added, ” A minivan isn’t more uncool than your average crossover.”

Joseph Choi, product planner for the 2022 Kia Carnival, said millennials with families and childless couples are snapping up the new Carnival, which replaced the automaker’s Sedona minivan this year. Demand is so hot that dealers have trouble keeping the minivan on lots, he said.

“The top trims are selling like gangbusters,” he told ABC News. “Many millennials are trying to break free from societal norms of the past. The Carnival is suitable for so many needs and you don’t have to use all the utility all the time.”

Kia went tech heavy with the Carnival to attract these key customers, installing a 360-degree camera, dual 12.3-inch screens, a Bose stereo system and 12 driver assistance system features. The 3.5-liter V6 engine makes a healthy 290 hp and leather seats and a panoramic roof are also available in certain trims. The minivan’s “VIP Lounge Seats,” with power controls and leg extensions, are “unlike any experience,” Choi said, comparing the seats to those in the glitzy $161,000 Mercedes Maybach GLS SUV.

Choi said the upscale interior and bold, rugged look of the Carnival could help it steal sales from the competition, which he admitted was fierce for such a niche market.

“Everybody has upped their games,” he said. “It’s all about the execution.”

Car and Driver’s Dyer said he’s shocked his Pacifica gets so many shout-outs from strangers.

“I did not anticipate that anyone would notice it and compliment it. No one ever said anything about the Lincoln we had,” he said.