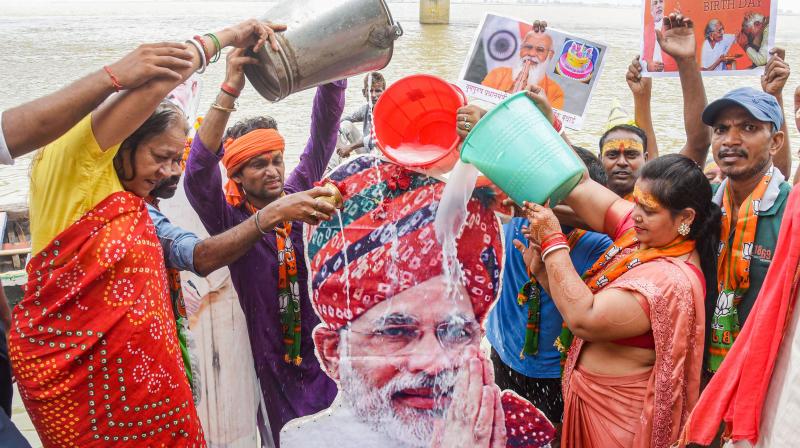 Prime Minister Narendra Modi is having a difficult year. The economy is struggling after a brutal second wave of Covid-19, his popularity has dipped and a crucial state election looms. Now his ruling party has planned a mega birthday bash for him in “service of the nation.”

Starting Friday, when the prime minister turns 71, some 50 million postcards will be mailed to him from citizens saying “thank you” for his concern for India’s poor, Om Prakash Dhurve, a secretary of the Bharatiya Janata Party, said. There will be film screenings and exhibitions on his life, blood donation camps, cleanliness and vaccination drives, as part of the celebration billed as the “Service and Dedication Campaign” by the party’s youth wing.

Environmental campaigns will clean 71 spots in various states. Local units of the BJP will organize prayer ceremonies and fairs in their areas with stalls set up to encourage people to download the NaMoApp, “which will help them communicate with the Hon’ble Prime Minister directly,” the party’s youth wing said.

“BJP is observing this as service and dedication campaign,” said Dhurve. “We want Modi to be become glorious and continuously serve the nation.” While Modi’s birthday is celebrated by the party every year, the scale of the extravaganza this time is a first. A spokesman of the prime minister office refused to comment.

The grand events come as Modi’s popularity has dipped to 24% from 66% a year ago, the lowest point since he came to power seven years ago, according to a Mood of the Nation survey published by the India Today media group in August. A sweeping second wave of coronavirus infections in April and May overwhelmed burial grounds and crematoriums and shuttered the economy.

His party lost a key state election in May and is looking to retain power in the politically significant state of Uttar Pradesh, which goes to the polls early next year. His home state of Gujarat will also have elections in late 2022.

“This is chiefly a strategy to mollify people’s anger on mismanagement of the Covid pandemic and winning assembly elections in Uttar Pradesh — and restore Modi as a charismatic, dynamic leader,” said Nilanjan Mukhopadhyay, a political analyst who has written a Modi biography. “The whole campaign is a blatant copy of the individualized-authoritarian model and also a great PR exercise.”

The celebrations are in stark contrast to the everyday reality of millions of Indians left jobless by the pandemic.

More than a year after the first Covid-19 lockdown, the unemployment rate is still above pre-pandemic levels, with the manufacturing sector seen to have shed about 10 million jobs permanently and most new opportunities in services turning out to be low-paying gigs. That’s hardly a reason for cheer in an economy where private consumption makes up some 60% of gross domestic product.

Many economists see this as a recipe for a bumpy recovery. Although the latest quarterly headline growth numbers look good, GDP when adjusted for base effect, is much weaker than it was before the pandemic.

The main opposition Congress party panned the birthday events, with plans to mark Sept. 17 as #NationalUnemploymentDay, the president of the party’s youth wing Srinivas B.V. said on Twitter.

The celebrations, which are being paid for by the BJP and will end on Oct. 7, also mark two decades for Modi in public office. He first became the chief minister of the western state of Gujarat in 2001.