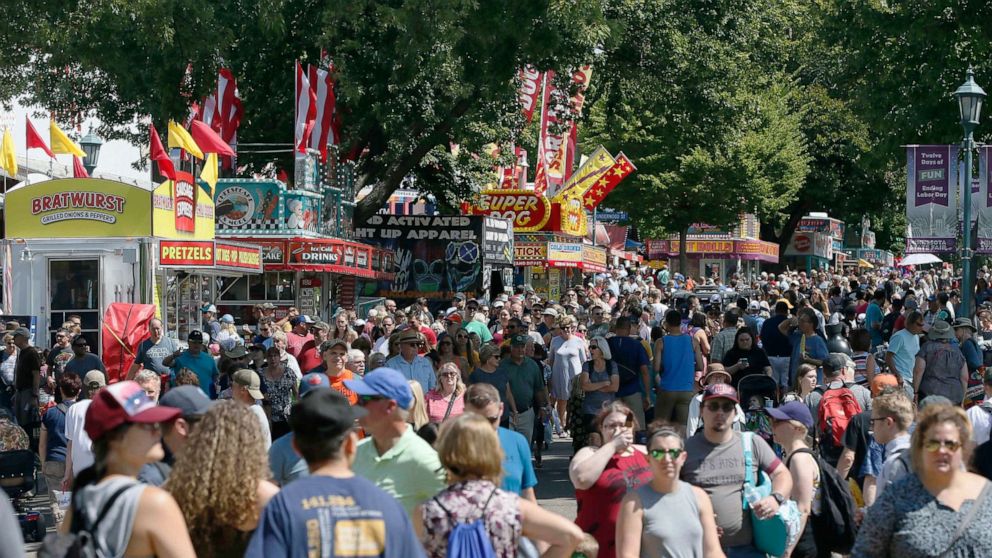 But Reps. Dean Phillips of Minnesota and Dusty Johnson of South Dakota were looking for something else: an opportunity to find common ground and prove that civility in the country’s politics is not extinct.

At a time when partisanship is uglier than ever in the halls of Congress, Phillips, a blue state Democrat, and Johnson, a Trump country Republican, are piloting a novel bipartisan political exchange program, featuring joint visits to each other’s districts and intimate joint town hall meetings with a diverse mix of constituents.

“There are lots of good people in Congress,” Johnson told ABC at the Minnesota State Fair where both men poured fresh milk together, visited a barn filled with pregnant livestock and rode down a giant slide.

Both lawmakers are members of the House Problem Solvers Caucus, a group of moderate consensus-seekers on Capitol Hill who have notched success brokering compromises around COVID-19 relief and in shaping debate around a bipartisan infrastructure agreement.

Despite their sharp differences on government spending, health care and abortion, Phillips and Johnson said they hope actively modeling civility and decency will lay the groundwork for a more productive legislative process in Washington.

“The people who are loudest really want us to be divided. I think most members are good people who want to find common ground but, man alive, the loudest ones — they get a disproportionate amount of the attention,” Johnson said.

In a Minneapolis suburb, Phillips and Johnson convened with seven voters from across the political spectrum — liberals and conservatives, all strangers to each other — for a conversation moderated by the nonpartisan nonprofit Braver Angels, founded by University of Minnesota professor and licensed marriage therapist Bill Doherty.

The organization, established after the 2016 election, is dedicated to breaking through polarized political rhetoric and building bipartisan trust at a grassroots level. It has facilitated more than 1,000 conversations across the country.

“I’ve been doing marriage therapy for 40 years, I’ve never seen politics invade the marriage like it has now,” Doherty told ABC News. “We seem to have more things that are dividing us than ever.”

Johnson and Phillips became the first members of Congress to take part in a conversation moderated by Braver Angels, where they sat among participants and joined the frank dialogue about how political polarization has strained family relationships, divided neighborhoods and unsettled communities nationwide.

Nick Erpelding, a self-identified conservative, said politics was “nowhere near the top of the conversation list” when he married his left-of-center wife 14 years ago.

“You can’t go anywhere today without people looking at you, and before they even know who you are, they want to know, OK, is this person vaccinated, or is this person toting a gun?” he said.

Michael, a self-identified liberal participant, said some relationships in his family are so strained that his son doesn’t see his cousins.

“It’s tragic,” he said. “Some people that I talk to wonder could we go to civil war if we don’t stop this and find a better way?”

Led by Doherty — who cut off the participants and lawmakers from interrupting one another — the conversation did not even mention former President Donald Trump or President Joe Biden by name.

Instead, using prompts such as “health care” and “polarization,” participants listened to personal stories and perspectives instead of debating or challenging one another.

That included Johnson and Phillips, who spoke about their families and frustrations with colleagues on Capitol Hill who are more interested in celebrity than compromise.

“If you pose questions about what really is concerning people in their lives and in their communities, they don’t go right away to the politicians,” Doherty explained about the group’s approach.

Together, the group didn’t find a way to make health care more affordable or bring Republicans and Democrats together around fighting the COVID-19 pandemic.

But they left the conversation with a greater appreciation of the others in the group and their perspectives.

“We’re more alike than we are different,” said Erin Brumm, another conservative participant. “It was a little bit surprising, but enlightening.”

“I learn from him. He learns from me,” Phillips said of Johnson and their experience in Minnesota. “And if that can be just a tiny bit of a seed that we metaphorically plant at the state fair … that’s a darn good beginning.”

Phillips said he plans to visit Johnson’s district soon, and both said they have convened their congressional offices for similar workshops. The Minnesota trip was organized in part by the Bipartisan Policy Center, which said it has 30 more exchange visits planned for this fall and winter.

Both lawmakers will also be able to put their new approach to the test later this month when Congress debates infrastructure legislation and Biden’s domestic policy agenda — in addition to must-past business that includes government funding and the nation’s debt limit.