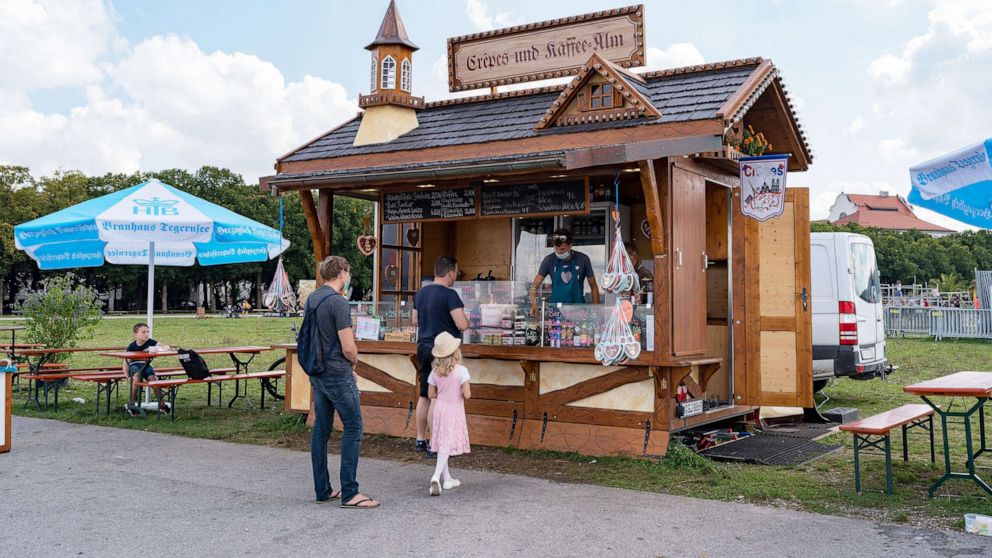 With music festivals and packed football stadiums back in full swing in the United States, in Munich, home to the world-famous Oktoberfest, the streets are normally overflowing with cheer and beer right now, but the 1.5 million residents of the Bavarian capital will have to forgo their grand tradition for a second year in a row due to COVID-19.

In the heart of the city, the California Bean is a popular brunch spot offering a blend of American and Bavarian dishes. The restaurant’s owner, Eveyln Müller, told ABC News that although her restaurant provides a laid-back atmosphere, she says the cancellation of one of the world’s most famous festivals, now two years in a row, brings a feeling of emptiness to the locals.

“[We miss] the people, we miss the business. We miss everything,” Müller said.

That emptiness is also having an impact on the city’s economy. Many businesses struggled last year under COVID restrictions and Munich was no exception. Businesses there are feeling the strain from canceling the 16-day event where roughly two million gallons of beer are consumed and over six million people visit the area.

In 2019, Oktoberfest brought over 1.2 billion Euros to the city of Munich, according to a report from the city’s Department of Labor and Economic Development. Without that money coming into the area since then — economic fears are high.

Michael Christian, who’s been working in Munich’s restaurant industry for 15 years, now works as a server at a local cafe chain called Müller-Brot, after losing his job at an Italian restaurant in 2020. He says with the lack of money he made last year, workers in the hospitality business can’t afford to miss any income in a city like Munich.

“The rent is high, and food and lifestyle [prices are also] high,” Christian said. The Bavarian capital is one of Germany’s most expensive cities to live in, and according to a recent report by Immowelt, a German home and apartment search site, rent has increased 24% in the last five years.

At The 4You Hostel, just one subway stop north of the Oktoberfest grounds, Philipp Freund, who works there as a clerk, says 2020 brought extreme financial challenges, and he didn’t know if the business was going to survive.

“Like my boss, every week he was in a bad mood or even a darker mood like you never knew because [there] was a lot of uncertainty, and yeah, I think we were pretty close. So, if we didn’t get any help from the government, we would be shut down. Definitely, like there was no chance at all,” Freund told ABC News.

Munich’s department for labor and economics told ABC News that businesses received government assistance during the pandemic lockdowns, but only 10% of establishments in the city shut down permanently. When the city announced in May that Oktoberfest will be canceled yet again, surviving restaurants and hotels now face another hurdle.

“A lot of months you don’t really make that much money. Most hotels survive solely because of the Oktoberfest, so when the Oktoberfest doesn’t take place, it’s a big problem,” said Freund.

Clemens Baumgärtner, deputy mayor for labor and economy for the city of Munich and chief of Oktoberfest, told ABC News that he understands the gravity of the economic situation, but canceling was a must.

“To miss it two times in these difficult times is a huge economic damage, but you can’t compare the economic damage to the health damage it would do when it would happen now in 2021,” Baumgärtner said. “So, any money being paid or not being earned is cheaper than losing life. For this reason, it was the absolute only one right decision to not let it happen in 2021.”

While the International Motor Show was held last week in the city and brought additional revenue to the community, Clemens said, he said that he also recognizes the stress that local businesses and workers are under, but that canceling Oktoberfest is to ensure future success for the brand, and more importantly, the event needs to be done right or not all, because it’s more than just a festival.

“The special thing about Oktoberfest is that it’s not just a beer festival. It’s not about big LCD screens displaying some stupid stuff and loud music playing around. It’s about history, culture, [and] local culture, which is taken very serious[ly],” he said.

He said that his team is exploring different health and safety protocols so the event can return safely next year.

Although the Oktoberfest atmosphere is missing in Munich, the German festival is being celebrated in Cincinnati this weekend, where Clemens will go as first chief of Oktoberfest in history to celebrate the Bavarian-American event on the same weekend of its traditional Munich dates.

Now, at the site of the Theresienwiese where the event is usually held and supposed to kick off this weekend, it feels like a ghost town. There are no amusement park rides lighting the sky, only bikers cycling through the 4.5 million sq. ft open space. The roaring energy of 10,000 people packed in big beer tents, for now, has been replaced by the sound of families enjoying quiet afternoon walks. Where there would normally be 13,000 workers bringing life to one of Germany’s richest traditions, only two food stands remain in the entire area.

Freund says what he misses the most about the folk festival is meeting people from all over the world and the energy they bring to the city, but says he has optimism that next year will be different.

“Well, first of all it’s the vaccinations, that’s what gives me hope. Lot of people in the world have the opportunity to get vaccinated, and I just hope if it’s safe for everyone, it’s a great experience…. So I hope that next year the Oktoberfest is a big celebration as the pandemic is over or we get over it. I’m looking forward to that,” he said.