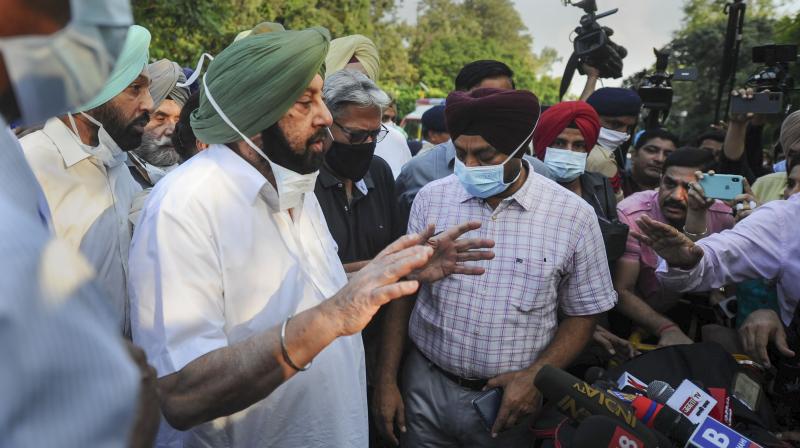 New Delhi: Feeling "humiliated", Congress’ Punjab chief minister Captain Amarinder Singh resigned on Saturday. But on his way out, the Captain made it categorically clear that the battle was not over yet and that he would "exercise his options when the time comes." The old Congress war horse also indicated that he was in no mood to “accept” the new chief minister being thrusted upon by the Gandhi high command and  hit out at his bête noire, the state unit chief Navjot Singh Sidhu, calling him anti-national, unstable and incompetent.

“Fail to understand @INCIndia decision. We won all polls in Punjab since 2017. People were clearly happy with my govt. But party leaders have cut their nose to spite their face, and ended up from a winning to a losing position,” said a tweet by Capt. Singh’s media advisor Raveen Thukral.

Captain Amarinder made the announcement at a press conference after handing over his resignation to Punjab governor Banwarilal Purohit. "I was humiliated three times by the Congress leadership in the past two months. Previously MLAs were called to Delhi twice and now they convened Congress Legislative Party (CLP) meeting here in Chandigarh today," Captain Singh told reporters on Saturday, adding, "If there is any element of doubt over my ability, I feel humiliated.” In the last two months there has been a concerted campaign in the Punjab Congress against the Captain.

Saturday morning Captain Singh called up Congress president Sonia Gandhi informing her that he was not interested in continuing as the chief minister as he felt humiliated. He also revealed that Mrs Gandhi said, “I am sorry Amarinder”. He said that he would decide his future political course of action in consultation with his supporters who have stood by him for over five decades. “There is always an option, and I will use that option when the time comes. At the moment I am still in Congress,” he said.

The entire episode was necessitated as the party high command late Friday night called a legislature party meeting on Saturday evening and also deputed Central observers. Sensing trouble and further humiliation, Captain Singh thwarted the plans of the high command of a seamless transfer of power like that in Gujarat and tendered his resignation.

Hitting out at Mr Sidhu, Capt. Singh said, “For the sake of my country, I'll oppose his (Navjot Singh Sidhu) name for chief minister of Punjab. It's a matter of national security. Pakistan PM Imran Khan is his friend. Sidhu has a relation with Army chief Gen Qamar Javed Bajwa,” and added, "Navjot Singh Sidhu is an incompetent man. He is going to be a disaster. He couldn't run one ministry I gave him."

Rejecting claims by the Congress leadership that he had lost the confidence of the MLAs, Captain Singh termed it a lame excuse. “Just a week ago, I had sent to Sonia Gandhi a list of 63 MLAs who were supporting me,” he said, adding that MLAs usually respond to what they think Delhi wants, which was the case at the CLP meeting too. In any case, it is not possible to make all MLAs happy, he added.

The tussle between the Captain and Mr Sidhu tussle has been going on for some time now. Even after the Captain's strong reservations, the high command appointed Mr Sidhu as the state unit chief. The current episode will have a long lasting impact on the party, especially in the upcoming Assembly elections.

In the last 20 years the entire Congress campaign and strategy in Punjab has centred around Captain Amarinder Singh. He is the one who defeated the late finance minister Arun Jaitley in 2014 when the BJP’s Modi juggernaut swept through the entire country. Captain enjoys the trust and support of the Jat Sikhs and the Dalits, added to this is his service background as Punjab has several men in the forces.

With Capt. Singh’s alienation and resignation, the Congress has fractured a substantial vote bank in terms of Jat Sikhs. Also, many see this as the doing of Mr Sidhu who is still considered as an import from the BJP.

Meanwhile, the general secretary incharge of Punjab Harish Rawat along with two AICC observers — Ajay Maken and Harish Chaudhary — landed in Chandigarh for the legislature party meeting on Saturday. The meeting unanimously passed two resolutions and sent them to the party high command in Delhi. After the meeting, Mr Rawat said that no decision has been taken on the name of CLP leader as a final call is to be taken by the party’s top leadership. “We have sent two resolutions to the party high command which were passed in the Congress Legislative Party today. We are waiting for their (party high command) decision. Captain (Amarinder Singh) has worked efficiently," Mr Rawat said.

Mr Maken, who was also present in the meeting as Congress observer for Punjab, said, “There was no discussion on name (CLP leader)." He added that 78 MLAs out of 80 were present during the CLP meeting held in Chandigarh.

The name of Sunil Jhakar is doing the rounds as the frontrunner. But if the high command wants to choose a Jat Sikh, Sukhjinder Singh Randhawa may be a consensus candidate.

Mr Jakhar was the president of the Punjab Congress before the post went to Navjot Singh Sidhu in July this year. When the tussle between Captain Amarinder Singh and Mr Sidhu reached its peak, Mr Jakhar met the district presidents to find a solution to the unending crisis.