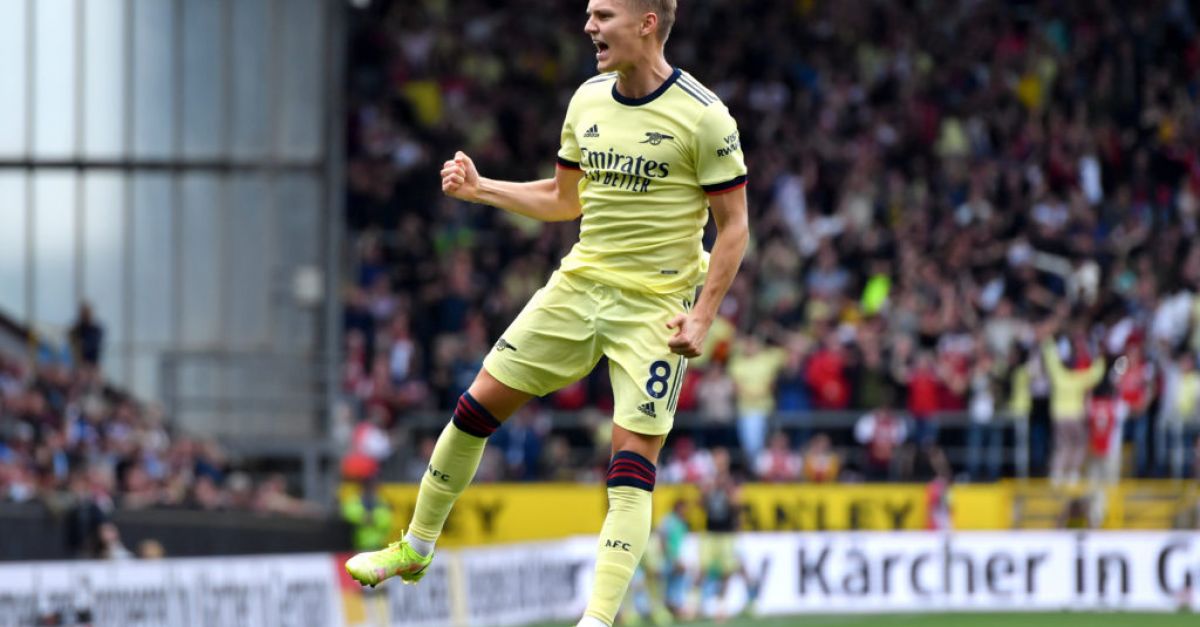 Norway international Odegaard curled home the only goal in the 30th minute to further ease the pressure on Gunners boss Mikel Arteta.

Arteta’s side clinched a second successive top-flight victory, but they were indebted to a controversial VAR intervention, which Burnley felt robbed them of a second-half penalty.

Referee Anthony Taylor initially pointed to the spot when Burnley substitute Matej Vydra went down under Arsenal goalkeeper Aaron Ramsdale’s challenge, only to change his mind after watching the replay.

Arsenal lacked the pace or creative spark to threaten Burnley’s well-drilled 4-4-2 system during the opening 25 minutes, but that all changed after Barnes tripped Bukayo Saka in a central position 25 yards from goal.

It was a moment of Premier League quality that the game had been crying out for and former Real Madrid midfielder Odegaard delivered, left-footed, for his first goal of the season and third in total for the Gunners.

Burnley pressed forward in search of an equaliser before the break and Barnes, under pressure from Arsenal defender Gabriel, failed to get his shot on target after Josh Brownhill’s clipped ball into the box.

Arsenal went close to doubling their lead on the stroke of half-time when Emile Smith Rowe curled a first-time shot just off target after being picked out by Nicolas Pepe.

Burnley’s intent after the second half resumed fired up the Clarets fans and Ashley Westwood failed to get enough power on his close-range effort.

The Gunners responded through Smith Rowe, whose low shot was easily gathered by Pope after good work from Saka and Pierre-Emerick Aubameyang.

Burnley boss Sean Dyche made a double substitution in the 56th minute, sending on Maxwel Cornet and Vydra for Johann Berg Gudmundsson and Barnes, and it had an instant impact.

Summer signing Cornet was given a rousing reception and the £12.85 million (€15 million) purchase from Lyon lifted the home crowd further when forcing Ramsdale into a flying save minutes later.

Vydra was also quick to contribute. He raced on to Gunners defender Ben White’s short back-pass and when the Czech Republic striker went down under Ramsdale’s challenge, referee Taylor awarded a penalty.

Ramsdale had made contact with Vydra, but after VAR intervention Taylor checked the replay and promptly reversed his decision.

The England goalkeeper was adjudged to have made contact with the ball first and Taylor’s U-turn left Burnley furious.

But Arsenal held on to extend their unbeaten league run at Turf Moor to 10 games and leave Burnley with one point from their first five matches.