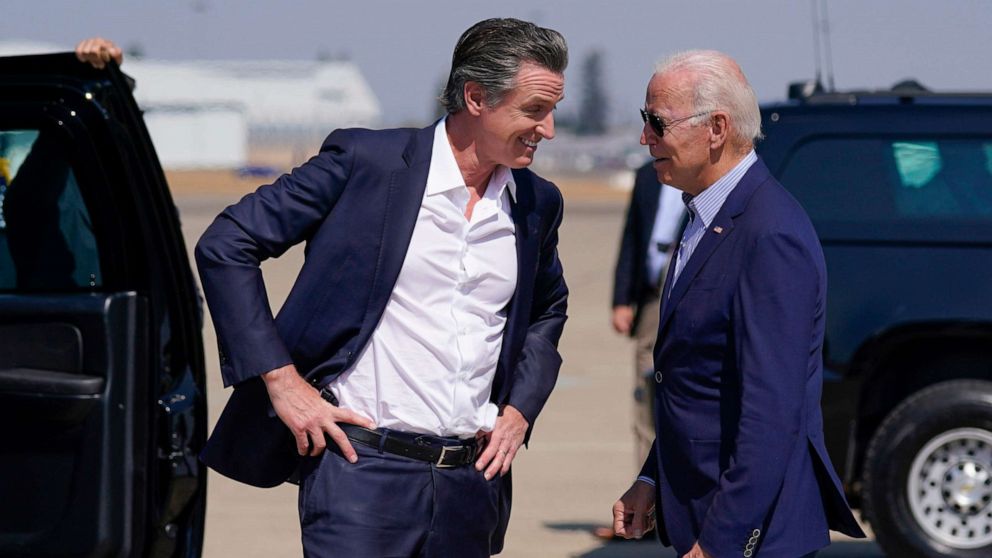 The California recall has featured an Olympic-champion-turned-reality star, a real-estate magnate who campaigns with a half-ton Kodiak bear, plus 44 other candidates who include a shaman yoga instructor, a social-media influencer and a self-described “LA billboard icon.”

Yet the push to recall Gov. Gavin Newsom has looked almost nothing like the one Arnold Schwarzenegger rode to office. That’s not for lack of colorful characters so much as it is for the higher perceived stakes in the lives of voters — and Democrats’ efforts to replay 2020 instead of 2003.

With voting concluding at 11 p.m. ET Tuesday, the race is ending as it started — as a test of COVID-era governance, just with Democrats on offense toward the close. Newsom and national Democrats have both defended their leadership and explained what the alternative would mean, with a certain former president as a foil.

“Voting no will be protecting California from Trump Republicans trying to block us from defeating this pandemic,” President Joe Biden said Monday night at Newsom’s rally in Long Beach, California. “You either keep Gavin Newsom as your governor, or you’ll get Donald Trump.”

“Trumpism is still on the ballot,” Newsom said.

The leading Republican replacement candidate, Larry Elder, has played to Trump-era type, right down to suggesting that election results may not be trusted. More regularly and relevantly, he has promised to reverse mask and vaccine mandates that have been hallmarks of Newsom’s pandemic leadership.

After a viral photo of Newsom flouting his own state’s COVID restrictions juiced the recall early on, the governor leaned in on the pandemic as the reason to keep him in office.

Critically for Democrats, they appear to have made the race a choice rather than a simple referendum. Deep-blue California will offer limited lessons applicable elsewhere, but that’s one that, if Newsom prevails, will be remembered for a while.

An hours-long session of the House Foreign Affairs Committee devolved into partisan mudslinging during Secretary of State Antony Blinken’s first appearance before Congress since the U.S. troop withdrawal in Afghanistan.

Blinken maintained his defense of the Biden administration’s decision to pull troops out and cited former President Donald Trump’s deal with the Taliban as a factor in the chaotic withdrawal.

“We inherited a deadline. We did not inherit a plan,” Blinken told the committee in his virtual testimony.

In theatrical fashion, some Republican lawmakers on the committee accused Blinken of lying and manipulating intelligence. Rep. Joe Wilson, R-S.C., ​told Blinken: “As the grateful father of an Afghanistan veteran, I personally see your actions as indefensible” and then said he should resign. Rep. Scott Perry, R-Pa., even asked Blinken about Hunter Biden because “the secretary generally refuses to answer questions about Afghanistan.”

Lawmakers on both sides criticized the haphazard withdrawal, including the attack that killed 13 U.S. service members, and questioned Blinken on Special Immigrant Visa applicants and American citizens still left in the war-torn nation. Blinken told the committee the administration was committed to getting every American out of Afghanistan but didn’t make the same clear commitment for all Afghan allies.

Blinken will be in the hot seat again Tuesday, this time testifying before the Senate Foreign Relations Committee.

While Californians vote, another consequential election will be unfolding in Boston’s preliminary mayoral race. The field of five hopefuls will be whittled to the final two candidates who will face off in November.

All of the top contenders are women of color — a significant change to the city’s legacy of being led by white men amid historic racial tensions. City Councilor Michelle Wu is the leading candidate, potentially leaving fellow City Councilors Andrea Campbell and Annissa Essaibi George and acting Mayor Kim Janey vying for second place.

Janey’s interim ascension to the mayoral office in March was historic in its own right. Still, the current mayor’s handling of a series of political controversies — including the firing of a police commissioner and racial tensions in a Boston-area school committee — worked against her ability to maintain a perceived lead. Last month, Janey also invoked — and subsequently retracted — a comparison between vaccine passports and Trump-era birtherism or slaves having to “show papers.”

The diversity of the top tier reflects the notable change of the city’s growing demographics — according to census data, more than half of Boston’s population now comprises of people of color. Politically, much of the city also falls into Rep. Ayanna Pressley’s congressional district, whose 2018 victory made her Massachusetts’ first Black congresswoman.

ABC News’ “Start Here” podcast. Tuesday morning’s episode starts with the California recall election and ABC News Political Director Rick Klein on why it could have national implications. Then, ABC News’ Trish Turner reports on the divisions among Democrats over the $3.5 trillion spending bill. And, ABC News Senior Investigative Reporter Aaron Katersky breaks down the next steps for a sexual assault lawsuit against Prince Andrew as the prince challenges the allegations and jurisdiction. http://apple.co/2HPocUL