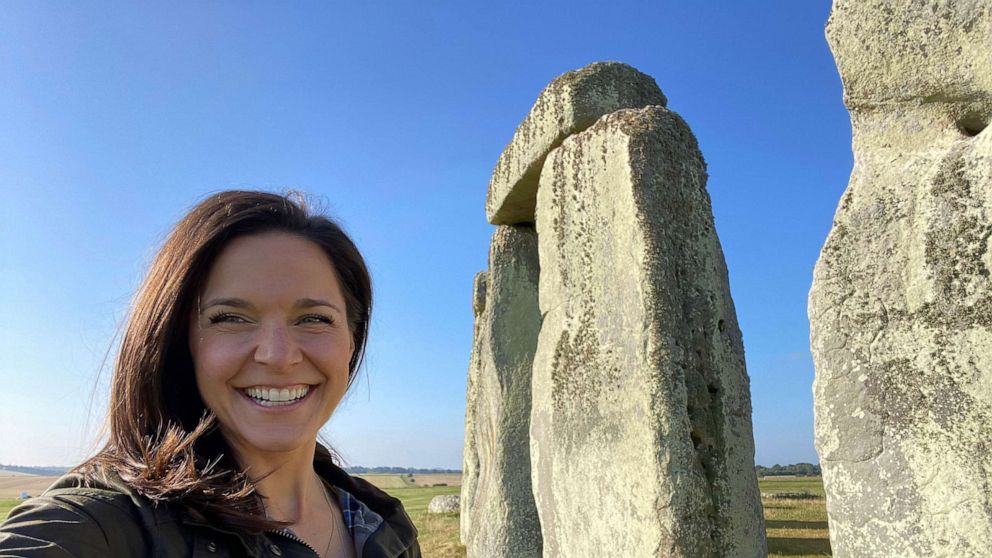 Standing eye to eye with the top of Stonehenge, I was in awe of not just history, but pre-history. It’s something so ancient, it dwarfs our concept of time and self-importance.

I was at a loss for words, and think what I managed to say was, “this is so exciting,” as I tried to contain my urge to touch the stones.

We’re shown how the stones were set up to align perfectly with the sun. Every year, thousands still come to see the sunrise through the stone’s arches during the summer solstice and set during the winter solstice. While we still don’t know exactly who built this monument and when, standing inside the heart of Stonehenge, it’s clear there’s been magic and myth here for thousands of years.

I got my eye-to-eye look while up on temporary scaffolding that’s been set up beside these massive, ancient Neolithic stones as part of ongoing conservation work at the monument. It’s rare access and an unusual sight. This work is the most significant conservation effort being done on the stones in 60 years and is expected to last about two weeks.

Up here, I feel the weight of myth and history. It’s James Preston who shows me how this history needs an update, pointing to areas that were worked on in the 50s and need fixing today. He’s a stone conservationist who’s been working in the field since he was 16.

When I ask him what working on this job is like he says, “this is Stonehenge man” and calls it a dream, saying that “no one else will get to work on this in our lifetime.”

The project is run by English Heritage. They tell us they try to interfere as little as possible, and the last time any work was done was just after World War II. Technology and conservation methods have improved quite a bit since then. Now, scientists use lasers to scan each stone, keeping track of any naturally occurring geological cracks and fissures.

One of their biggest concerns is extreme weather due to climate change. Experts onsite tell us they’re seeing more frequent torrential rain and hotter heatwaves, both of which can lead to the cracks growing bigger.

The stones here have lasted for thousands of years, but as weather patterns change rapidly, conservation efforts are also having to adapt. By working on these cracks today, English Heritage hopes to future-proof the historical site for generations to come. As one expert on site told us, she’s confident these stones will be around for another few thousand years.