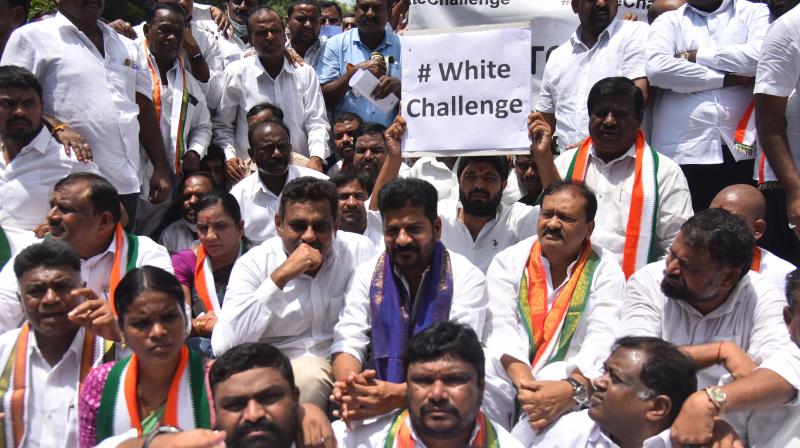 HYDERABAD: The Telangana Martyrs’ Memorial in Gun Park turned into a beehive of political activity on Monday over TPCC chief A. Revanth Reddy's “white challenge” to IT minister K.T. Rama Rao that seeks public representatives and celebrities to undergo testing for narcotics and prove that they were not consuming drugs.

Fast-paced developments followed soon after Rama Rao, who did not turn up at the Gun Park, filed a civil defamation case against Revanth Reddy for linking him with the Tollywood drugs case and BJP state president Bandi Sanjay Kumar accepting the 'white challenge' thrown at him by Chevella former MP Konda Vishweshwar Reddy and stating that he would undergo tests after completion of his padayatra on October 2.

While Revanth Reddy and Konda Vishweshwar Reddy arrived at Gun Park exactly at 12 noon to undergo tests, Rama Rao did not turn up. The war of words between Rama Rao and Revanth Reddy started on Twitter on Monday at 8.41 am when the Congress leader tagged the minister in his Tweet:, "To create awareness in the youth on increasing drug menace in the country…I have started the #WhiteChallenge and @KVishReddy has graciously accepted …Both of us will be waiting for @KTRTRS at Amaraveerula Sthupam today at 12 noon (sic)."

To this, Rama Rao replied at 9.05 am stating, "I am ready for any test & will travel to AIIMS Delhi if Rahul Gandhi is willing to join. It’s below my dignity to do it with Cherlapally jail alumni If I take the test & get a clean chit, will you apologise & quit your posts? Are you ready for a lie detector test on #Note4Vote (sic)."

Rama Rao tweeted again at 10.47 am stating, "Today I have invoked the legal process & filed a suit for defamation and injunction before the Hon’ble court I am confident that the Court process will clinchingly vindicate the falsity of the canards& lies spread against me and the culprits will be brought to book appropriately (sic)."

He filed a defamation case in the Hyderabad city civil court stating that Revanth Reddy was spreading lies with political vengeance. He also requested that the court grant perpetual injunction against Revanth Reddy.
The minister alleged that Revanth Reddy had made various ‘baseless, scurrilous, and manifestly false statements and allegations’ against him seeking to falsely link him with the ongoing investigation being conducted by the Enforcement Directorate.

The civil suit contended that the said investigations are being done against the accused and as part of investigation various persons are being examined. Rama Rao said Revanth Reddy had been spreading false propaganda against him and using his name maliciously, though he had denied any association or link with those being investigated for the alleged acts.

The minister sought a declaration that such false statements made by the Congress MP were ‘slanderous, libellous and constitute defamation’. He also sought an appropriate injunction against making such defamatory statements and “to take down all such false statements/ accusations.” He sought adequate compensation for “such serious and malicious acts of defamation caused by Revanth Reddy and further criminal proceedings be initiated.”

Meanwhile, addressing party leaders and activists at Gun Park, Revanth Reddy came down heavily on Rama Rao for not turning up to undergo tests. "I challenged KTR to undergo tests. But he is talking about Rahul Gandhi. Tomorrow, he may ask me to bring Ivanka Trump. How can I bring them all? Why is he trying to drag others when the challenge is between me and KTR? This only creates doubts among people on KTR. He says he never consumed drugs and will come out clean in tests. If it's true, why is he running away from tests?” Revanth Reddy questioned.