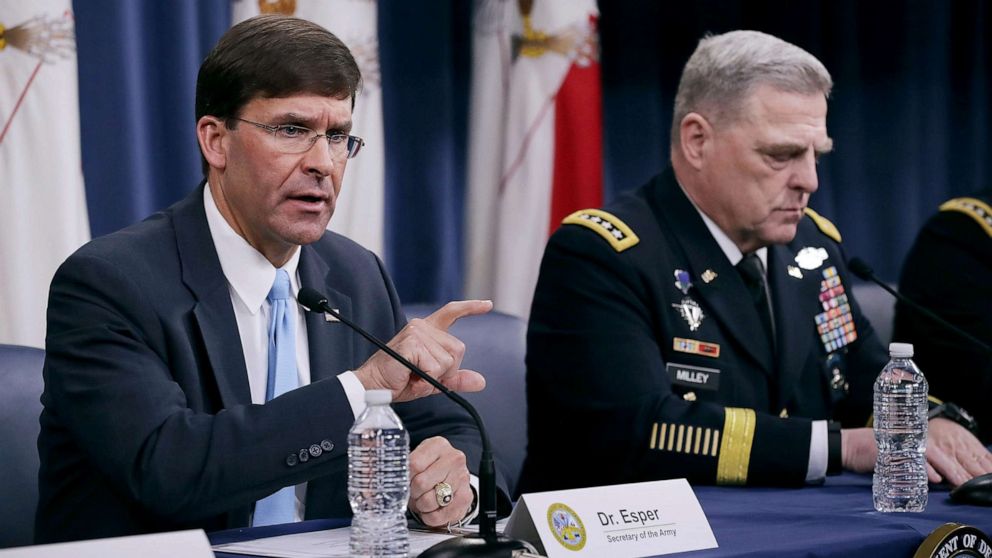 The president’s defense of Milley, the chairman of the Joint Chiefs of Staff under Trump and now under Biden, came a day after reports that a forthcoming book would reveal behind-the-scenes actions that Milley took to avoid war with China or Trump launching a nuclear strike.

But Milley was not the only top defense official to send a message to China during Trump’s final days in office, a former senior Pentagon official told ABC News.

Rather, he was actually following the lead of then-Defense Secretary Mark Esper, the official said.

Milley’s Oct. 30 conversation with his Chinese counterpart, first reported in the new book “Peril,” by Washington Post reporters Bob Woodward and Robert Costa, was meant to allay Chinese fears that Trump was planning a secret attack ahead of the presidential election. It was part of a coordinated effort started a week earlier by Esper, the former official said.

The outreach came as intelligence reports suggested the Chinese were increasingly concerned that Trump would launch a military strike on China.

Esper instructed another top Pentagon official, a civilian, to convey a message from Esper to his Chinese counterpart, Defense Minister Wei Fenghe, to assure him the U.S. had no intention of attacking China, the former official said.

“We saw indications the Chinese were over-reacting to rhetoric coming out of D.C.,” the former official said. “We conveyed that everything is under control, we have no plans (to attack). We didn’t want a misperception and misunderstanding or whatever, and we end up in some type of confrontation that leads to conflict.”

The chairman of the Joint Chiefs of Staff followed up this outreach with the call to his own counterpart, Gen. Li Zuocheng of the People’s Liberation Army. Esper and Milley coordinated their actions, the former official said.

“The notion that somehow Milley was rogue on diplomacy is just completely wrong,” the former official said. “It’s not how it happened. It began with (Esper) trying to make sure the United States didn’t end up at some needless confrontation with the Chinese weeks before the election.”

Esper and Milley, however, did agree not to inform U.S. national security adviser Robert O’Brien or anybody else at the White House about the conversation, according to the former official.

Woodward and Costa also reported that, after the Jan. 6 insurrection at the Capitol by pro-Trump rioters, Milley feared Trump could “go rogue” and worried that he could stoke military conflict to cling to power and derail the peaceful transfer of power.

On Jan. 8, Milley called Li and assured him the United States was “100 percent steady” and not on the brink of collapse or war, despite the unrest in Washington, according to “Peril,” which ABC News obtained ahead of its Sept. 21 release.

During Milley’s October call with Li, Woodward and Costa reported, Milley pledged to provide the Chinese a heads up if the U.S. did plan to attack. But the former official cast doubt on whether Milley actually made that promise.

The official portrayed the call in a more mundane light, portraying it instead as an effort, through commonly used channels, to prevent any misunderstanding that would lead the Chinese to act as if an American attack was coming.

A spokesman for the Joint Chiefs of Staff said Wednesday that Milley’s conversations with his foreign military counterparts, including the Chinese, take place “regularly” and “remain vital to improving mutual understanding of U.S. national security interests, reducing tensions, providing clarity and avoiding unintended consequences or conflict.”

“His calls with the Chinese and others in October and January were in keeping with these duties and responsibilities conveying reassurance in order to maintain strategic stability,” the spokesman, Col. Dave Butler, said, not denying the reported details of the call.

The calls, Butler said, were “staffed, coordinated and communicated with the Department of Defense” and other federal government agencies.

Woodward and Costa also reported that, on Jan. 8 — two days after the Capitol riot — Milley convened a meeting at the Pentagon with military officials responsible for relaying orders for a military or nuclear strike and made clear he “must be directly involved” with the process of launching a nuclear weapon. While the authors reported the meeting was unscheduled, the former Pentagon official told ABC News the gathering was, in fact, one that had been regularly scheduled.

Butler, the spokesman for the Joint Chiefs of Staff, said the meeting had taken place “in light of media reporting.”

“Gen. Milley frequently conducts meetings with uniformed leaders across the Services to ensure all leaders are aware of current issues,” Butler said, referring to the different military branches. “The meeting regarding nuclear weapons protocols was to remind uniformed leaders in the Pentagon of the long-established and robust procedures in light of media reporting on the subject.”

In a statement Tuesday, Trump called Milley’s actions “treason” and Sen. Marco Rubio, R-Fla., called on the general to resign.

Chris Miller, who served as acting defense secretary after Trump fired Esper in early November, said in a statement that, “If the reporting in Woodward’s book is accurate It represents a disgraceful and unprecedented act of insubordination by the Nation’s top military officer.”

“Accusations that Trump was intent on starting a war with China are completely unfounded,” he added.

“If Woodward’s story of Chairman of the Joint Chiefs of Staff Milley’s histrionic outbursts and unsanctioned, anti-Constitutional involvement in foreign policy prove true, he must resign immediately or be fired by the Secretary of Defense to guarantee the sanctity of the officer corps,” he wrote.

“I should note, that a lesser ranking officer accused of such behavior would immediately be relieved of duty pending a thorough and independent investigation,” he wrote. ” As secretary of defense, I did not and would not ever authorize such conduct.”

The Joint Chiefs of Staff said that Milley has followed the Constitution.

“Gen. Milley continues to act and advise within his authority in the lawful tradition of civilian control of the military and his oath to the Constitution,” its spokesman, Butler, said.

Pentagon press secretary John Kirby said Wednesday he had seen “nothing in what I’ve read that would cause any concern.” Kirby said Defense Secretary Lloyd Austin had “full trust and confidence in Chairman Milley and the job that he’s doing.”