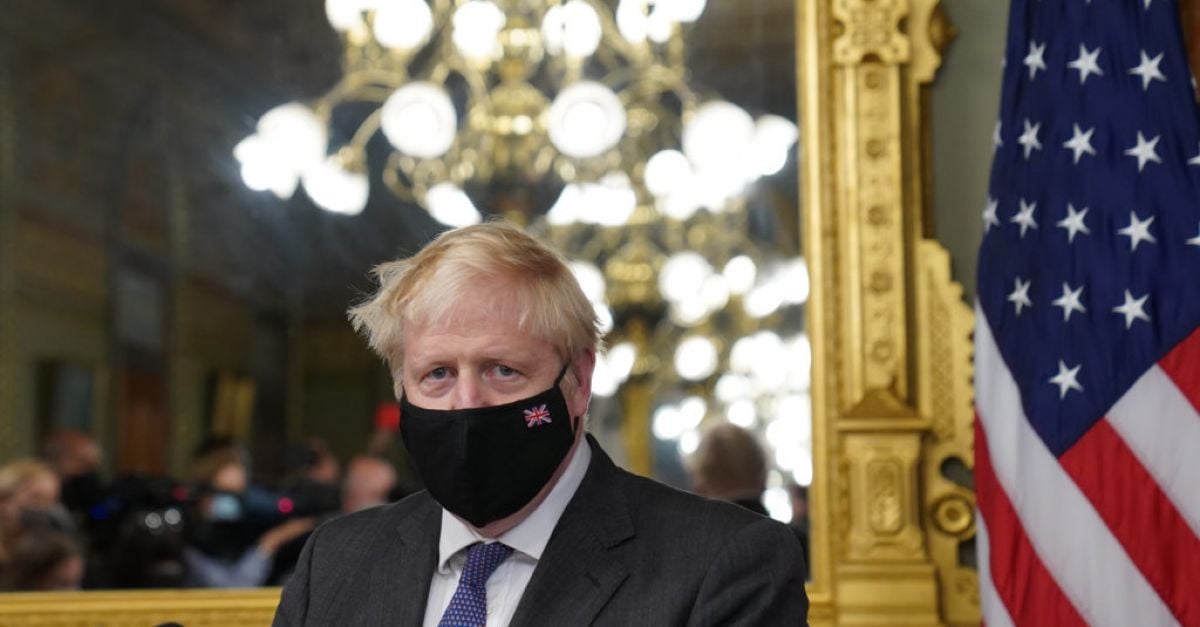 Boris Johnson has arrived at the White House complex for talks with Joe Biden after downplaying the likelihood of striking a post-Brexit trade deal with the United States in the coming years.

The British prime minister met US vice president Kamala Harris in her office on Tuesday afternoon, welcoming the “great improvement” of the removal of the blanket travel ban on the UK and describing Mr Biden’s climate funding commitment as a “great day for the world”.

He praised the bravery of US troops in the Afghanistan evacuations and said “on trade we are seeing real progress”, particularly over the “curious ban” on British beef, which provoked a chuckle from Ms Harris.

But earlier in the day Mr Johnson was unable to commit to securing the comprehensive free trade deal that was touted as a prize of Brexit by Leave supporters during the EU referendum.

He will meet the US president in the Oval Office later on Tuesday, having arrived at Union Station in Washington DC by train.

Speaking to journalists earlier in New York, where he has been attending a UN summit, Mr Johnson said there were “plenty of reason to be optimistic” about getting the free trade agreement (FTA) with the US.

However, the Vote Leave figurehead earlier downplayed the prospects of getting a trade deal by the next election, raising the possibility that he could leave Downing Street without achieving a key ambition for the post-Brexit era.

His concession came after suggesting trade negotiations are not a priority for the US president, who he accepted has “a lot of fish to fry”.

Asked if he would get the deal by 2024, Mr Johnson told Sky News: “We will keep going with free trade deals around the world including in the United States.

“I have plenty of reason to be optimistic about that. But the Americans do negotiate very hard.”

In his first visit to the White House since Mr Biden succeeded Donald Trump, Mr Johnson is expected to discuss the stalled trade talks with the president, as well as what further efforts they can take to address the looming humanitarian crisis in Afghanistan.

The British prime minister conceded Britain and the US could have possibly taken a different course over the withdrawal of troops of Afghanistan.

“America has been there for 20 years and it’s a respectable argument to say that enough is enough. Look, I mean, could we have done it a bit differently? Maybe we could,” Mr Johnson told American broadcaster NBC.

He had asked the US president to push back his deadline for drawing down all US troops after the Taliban marched back to power.

But Mr Biden rejected the request, meaning potentially thousands of vulnerable Afghans who worked for the UK and their families were left behind.

Travelling on an Amtrak train to DC, Mr Johnson had been buoyed by the announcement the US will drop the blanket ban on travellers arriving from the UK due to the coronavirus crisis.

However, No 10 appeared blindsided by Monday’s announcement, raising questions over the state of communications between the White House and Downing Street.

Just one day before the end of the ban was announced, Mr Johnson was downplaying to reporters any expectations that he could “crack” the issue this week.

Aboard the RAF Voyager on the flight to New York, Mr Johnson also seemed negative about the prospect of getting a trade deal in place any time soon.

“On the FTA, the reality is that Joe has a lot of fish to fry,” he told reporters.

In the run-up to the EU referendum in 2016, then-president Barack Obama warned Britons they would be at the “back of the queue” for any trade deal if they voted for Brexit.

The EU departure also presents a quandary to Mr Johnson’s relationship with Mr Biden, who is vocally proud of his Irish heritage and has warned there will be no trade deal if peace in Northern Ireland is jeopardised by the EU departure.

A major diplomatic row has also broken out over a new military pact between the UK, US and Australia because it scuppered a multibillion-dollar contract for France to provide submarines to Australia.

France took the extraordinary step of recalling its ambassadors to Washington and Canberra, but declined to do the same from London, accusing the UK of being America’s lapdog.

After meeting Mr Biden and Ms Harris in the White House, Mr Johnson will have dinner with Australian prime minister Scott Morrison in Washington.