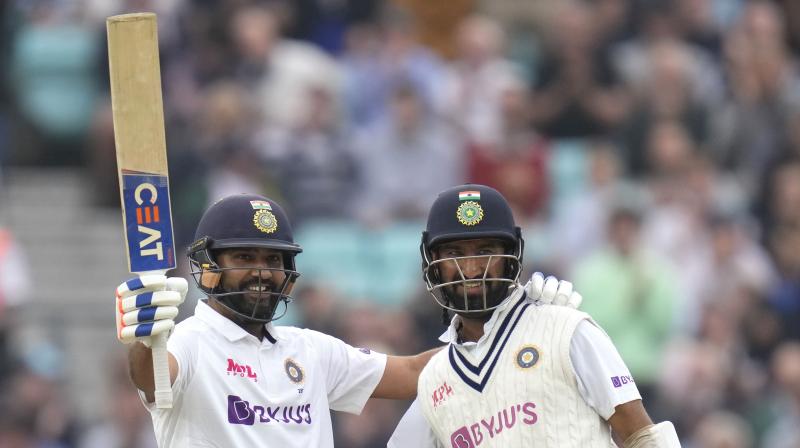 London: Senior India batsman Rohit Sharma has admitted that he knew it was his "last chance" in Test cricket when he was promoted to opener's slot in 2019 and said he was happy to have utilised the opportunity.

Rohit, who on Saturday scored an impressive 127 for his first overseas hundred in the fourth Test against England, said accepting the opener's role was one of the biggest decisions he took as a cricketer.

"You could say so in hindsight," Rohit said at the end of the third day's play when asked if giving the green light to the team management about batting at the top of order was the biggest risk he took.

"In the back of my mind, I knew this was my last chance as well trying another position in the batting order," he said after scoring his eighth Test hundred and fifth as an opener.

Rohit said when the offer came to him to open the batting, he was mentally ready to take up the challenge and see how he can do well up the order.

He was aware that there won't be too many chances as his stint as a middle-order batsman didn't go exactly well.

"I batted in middle order before and things didn't go as per the way I wanted it to and I knew this was my last opportunity to try out and you know management is thinking whatever I want to try," he stated.

However, sport is about taking chances that come one's way.

"When you are playing a sport, you always have to take those chances, those risks and so I was ready for it and didn't come to me as a surprise.

"It would have been my last opportunity if I wouldn't have succeeded. Anything could have happened," said Rohit, who was very straight forward in his admission.

He did say that the team management had told him that he will get a long rope.

"That (about it being his last opportunity) was my feeling. I don't know about others because the team management told me I will have a long run. But I wanted to think in a way that this is it. I have to make good use of this opportunity and for that I have to do whatever it takes."

For Rohit, it is all about ticking the small boxes in pursuit of the bigger picture.

"I don't mind looking ugly at times as long as I can get the job done for the team. That is very crucial."

Rohit also said it is not just that one comes and scores runs in England.

No, definitely, it is not just you come here and get a hundred. It has never been like that, I am sure for any of the batters, if you ask, they will say the same thing. It is the process and it takes time, he said.

"When you are playing overseas, it is never easy. Everything has a process and when I started opening, I knew that all those big scores are not just going to happen, there will be a process, which I need to follow, keep ticking the small boxes and that's something I did."

He had to make the "little adjustments" when he started opening the batting and that was not a big deal for him.

"When you play cricket all over the year, so much cricket, those little adjustments, you should be able to make it, based on the situations, conditions you are going to face and the position of the batting as well.

"You just can't come and play shots, especially when you are opening in place like England, you need to understand certain situation of the game, certain type of bowlers who are bowling at you.

"Getting a hundred, whether it is overseas or your home, it is always a good feeling. but it (overseas hundred) was never in my mind, what I was focussing on was the process, he noted."

Rohit said it was a "happy and enjoyable transition process" from being a middle-order batsman to open the innings.

"Most importantly I trusted what I was doing and I knew the results will come, the rewards will happen, but it might take time, it is just that you need to be patient, I was very patient, I hope everyone else were patient as well, he explained.

According to Rohit, the most pleasing thing about his knock was that he was able to play 250 balls.

If you look at all the Test matches that we played, I have nearly played 100 balls in every innings. The first up goal was play balls, try and see how I can stay on the pitch as long as possible, because we do know things start to get little easier when you spend time in the middle.

"Spending time on the crease in the middle was the biggest takeaway for me in the last four games for me, he signed off.