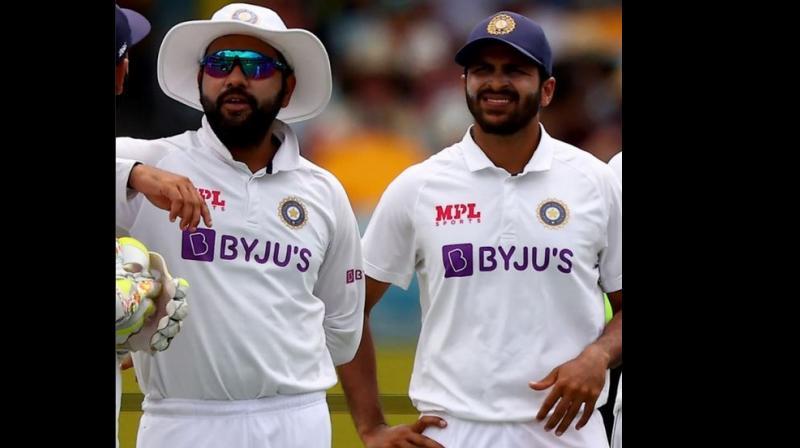 While Team India’s victory at the Oval against England is being hailed by the experts, a new debate has begun on the adjudicators’ decision to award the Player of the Match award to Rohit Sharma.
Rohit Sharma was adjudged the award for his 127 runs in the second innings in the fourth Test. However, experts are insisting not to forget Shardul Thakur’s contribution in the match. Interestingly, even Rohit Sharma voiced his opinion, saying that Thakur should have been the Player of the match.
For the unversed, not only did Shardul Thakur score fifties in both innings but also the Palghar Express, as he is also known, derailed both of England’s innings.
At the presentation ceremony, Virat Kohli had said, “Rohit’s innings was outstanding, but the impact performance from the lower-middle order, Shardul’s fifty was the difference and a counterattack in the second innings. Looking to restrict us but he was outstanding.”

Torn between the best

Besides the Indian side, Nasser Hussain, who was a part of the Player of the Match committee in the Sky commentary box, had also said that the team was split on the main man.
Then there is Dinesh Lad — who has been the mentor for both Rohit Sharma and Shardul Thakur — who admitted that according to him, the Player of the Match was Shardul Thakur. “Shardul’s contribution with the bat and ball in the fourth Test was important for India’s win, though we can’t forget Rohit’s contribution with the bat. My Player of the Match, however, is Shardul,” he said.
Shardul’s father, Narenda, was clear that he didn’t want the debate to prolong. Nevertheless, he did add, “It is not because I am his father I say this, but if people say Shardul should have been the winner there can’t be a debate. (That being said) I don’t know what the norms are there for this.”

Sunil Subramanium, former team manager for India’s team, believes that it is time to scrap the Man of the Match award. “Why should a personal award matter so much? It’s a team game and we have to get out of this mind set of pitting one individual against the other. If you ask me, (it’s) time to scrap this Man of the Match award,” he said matter-of-factly.
Sunil Subramanium also brought in the perspective of sponsors who use the platform to advertise their products. “There are enough avenues for sponsors to advertise their products. According to me, a Man of the Series should do and the press should refrain from making these awards an issue when they know fully well it’s more for a sponsor’s visibility than a cricketing judgement,” he states plainly.

What’s in a title?

Right in the middle of debating between Rohit Sharma and Shardul Thakur, Saad Bin Jung, the former conservationist and former cricketer, however, feels that Jadeja’s performance in the match was crucial.
“Shardul certainly did his bit. No doubt about that. Yet, it’s team effort that makes you win, never the individual. Rohit set the ball rolling but others certainly pitched in. I feel Jadeja was crucial. The batsman didn’t want to face him and ran to the other end,” he elaborates.

That being said, Saad Bin Jung clearly doesn’t think much about the titles in the present times. “I feel in a team game, there is no function of the man of the match. All these awards had a meaning when amateurs played the game. Today, the professional is merely doing his job. It’s his duty to perform or then get out. Such is the world of the professionals our boys have chosen. I feel every member deserves equal praise,” he says, explaining his thoughts further.