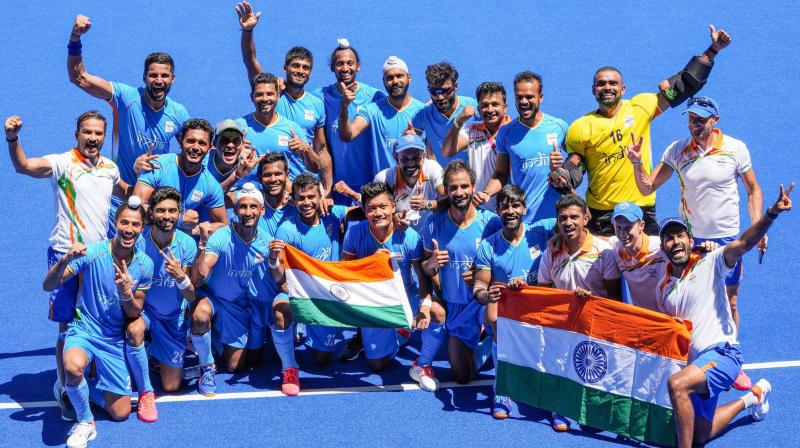 New Delhi: India men's hockey team skipper Manpreet Singh said it's time to stop basking in the glory of their historic bronze medal at the Tokyo Games and start focussing on qualifying for the Paris Olympics by winning next year's Asian Games.

The Indian team has been showered with accolades since returning home following a bronze medal winning feat at Tokyo, a medal that broke India's 41-year-old jinx at the Olympics.

It's been a month since the Indian men's team beat Germany 5-4 in the third place play off and Manpreet said it's time to start planning for a busy 2022 calendar.

"I think these past few weeks have been great with people showering us with all their love and praises. Now, I feel it's time we rest our bodies and mind," the India skipper said in a release issued by Hockey India.

"We have enjoyed all the felicitations, the honour and accolades we received has been overwhelming but now we must start thinking about how to better ourselves for the 2022 calendar."

With the all-important Asian Games scheduled to be held in Hangzhou, Zhejiang, China from September 10 to 25 next year, the team's top priority will be to qualify for the Paris Olympics by winning the gold at the continental tournament.

"Last time, we ended up with a Bronze and lost out on winning the automatic qualification. We were lucky to have the FIH Olympic qualifying matches in India. But we can't depend on the same again," he said.

"The best would be for us to qualify by winning the Asian Games, so it gives us right amount of time to prepare for 2024 Olympics."

While the men's team won the bronze, the women's side also finished at a creditable fourth place at Tokyo and Manpreet believes their Olympic performance will only increase the popularity of the sport.

"I truly feel this is a new beginning for Indian hockey. With the women's team too doing so well at the Olympics, hockey is witnessing the same kind of support it once had.

"I was told many people from different professions woke up early to see our matches just like they would back in the glory days when Indian hockey fans would stay glued to the radio to hear the commentary."

"I feel this fanbase we have earned after the Olympics is great for the sport in general and now it is on us to give these fans bigger and better feats to ensure their supports continues and the popularity of hockey grows further."