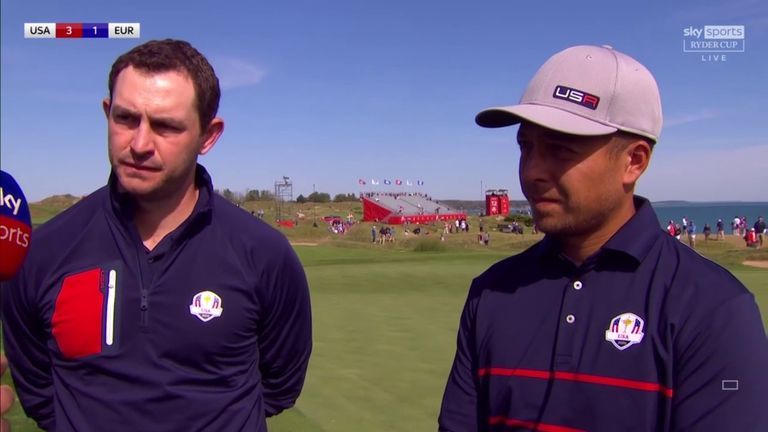 Tiger Woods may not be at Whistling Straits for the Ryder Cup this week but he is still providing plenty of inspiration for the United States team from his couch at home.

Woods, who made the last of his eight Ryder Cup appearances in Paris in 2018, is continuing his recovery from his car crash in February and did not want to distract Steve Stricker’s team by being present at the course as they attempt to win back the trophy from Europe.

However, Stricker did read out a supportive text message from Woods to his team on Thursday evening, while Patrick Cantlay also revealed he had spoken to the 15-time major winner at his home last week.

Woods’ words clearly spurred both Cantlay and Xander Schauffele on as the two American rookies romped to a 5&3 victory over Rory McIlroy and Ian Poulter in the foursomes on Friday morning.

Cantlay said: “So I saw him (Woods) last week at home, and just picked his brain on Ryder Cup and applied some of that here today.

“No better role model and no better leader, and just somebody that you can always learn from.”

Schauffele added: “We had a nice message from Tiger last night, and obviously not going to reveal what it said, but Pat and I knew. We referred to it a few times today, and we knew what we needed to do.

“We knew he was fist pumping from the couch. Whether he was on crutches or not, he’s as fired up as any back at home. So it’s nice to have his support.”

Who will win the 43rd Ryder Cup? Watch throughout the week live on Sky Sports’ dedicated Ryder Cup channel.