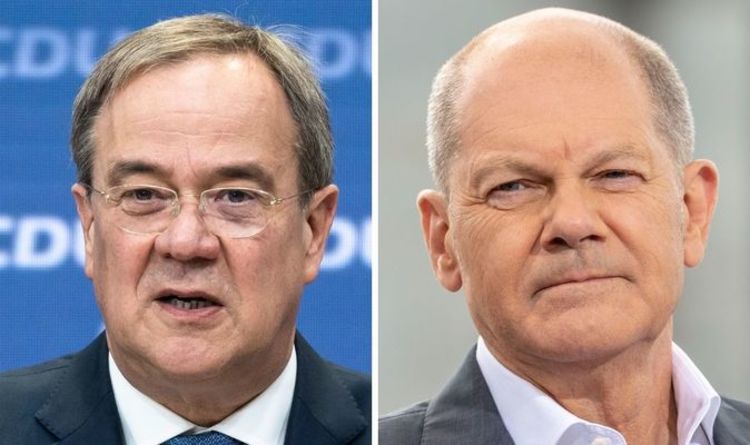 Germans will be rushing to ballot boxes throughout the country on Sunday, with voting due to close at 6pm local time. Voters in the will be electing 598 parliament seats plus overhang and levelling seats in the German parliament, the Bundestag. A clear majority will require winning 300 seats. During the last election in 2017, Mrs Merkel’s centre-right bloc recorded its worst result for nearly 70 years, with current coalition partner the Social Democrats (SPD) faring even worse.

New CDU leader Armin Laschet, who is taking over from the outgoing Mrs Merkel, will be hoping to improve on that result but had seen his party fall behind in several polls over the course of this week.

However, his party now appear to be making up ground, with several polls putting the centre-right almost level with the centre-left SPD, which is led by current Finance Minister Olaf Scholz.

The latest poll from FAZ/IfD Allensback on Friday also showed the Green Party finishing third with 16 percent, and they could still feature in a Government as a wide range of coalitions are possible to navigate.

SPD candidate Mr Scholz said during a rally in Berlin that a coalition with the Greens might be possible, telling voters: “The stronger the SPD is, the easier it will be to build a Government.” 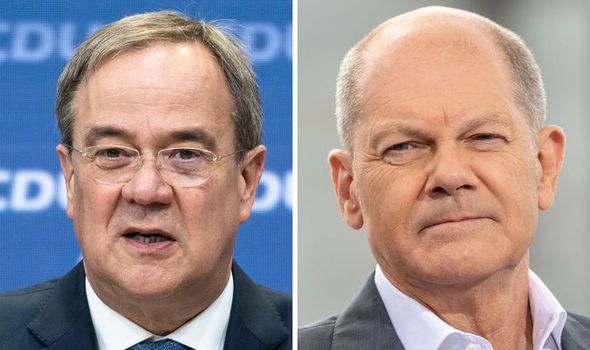 when she bows out of frontline politics after 16 years in charge.

A representative survey by the opinion research institute Civey on behalf of the German regional newspaper Augsburger Allgemeine of 5,007 people from September 22-24 revealed saw 52 percent say they will not miss Mrs Merkel as the country’s Chancellor.

More than two-thirds (38 percent disagreed), while the remaining 10 percent were undecided.

Four in 10 of the total number of people questioned said they will “definitely not” miss her, while around a quarter said they “definitely” will.

5 hours ago22:34Angela Merkel stepping down after nearly 16 years as Chancellor

The German election will mark the end of Angela Merkel’s 16 years in power.

She became German Chancellor on November 22, 2005, and for several years has been hugely popular, with her approval rating among the German people regularly jumping above an impressive 80 percent.

But in 2018, the EU figurehead said she would not seek a fifth term as Chancellor.

Mrs Merkel’s longevity is notable – among democratic Germany’s post-World War II leaders, she is second only behind Helmut Kohl, who led Germany from 1982 to 1998. 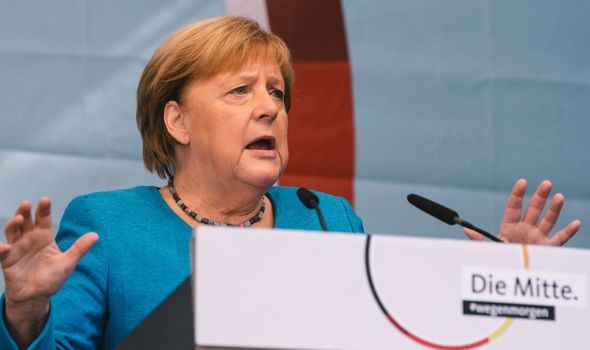 5 hours ago22:22Government may not be formed for weeks, possibly months

Recent polls have shown the CDU and SDP almost neck and neck in the German election.

It is unlikely either of the leading parties will win a majority of 300 seats in the German parliament – meaning another coalition Government is a strong possibility. 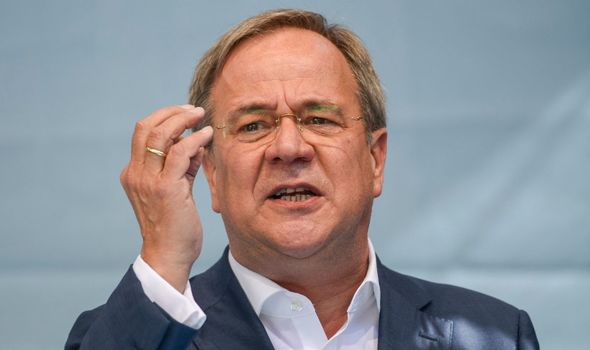 5 hours ago22:17Official results to be announced early on Monday

In the early hours of Monday, Municipal and State Returning Officers will announce their official results.

This will be followed by the Federal Returning Officer reveal the official general election results for the country as a whole.

Candidates elected through the ‘first vote’ process will be allotted their seats the Bundestag – the German federal parliament.

The total number of seats in parliament will then be divided among the parties according to the percentage of ‘second votes’ they receive.

This will then see MPs informed of the seats they have won in parliament.

5 hours ago22:12Vote count will continue until early hours of the morning

After polling stations shut at 6pm local time, the provisional election results will be announced by the Federal Returning Officer.

These will be calculated using exit poll data and published results from local voting districts so far.

The vote will then continue past midnight and into the early hours of Monday morning. 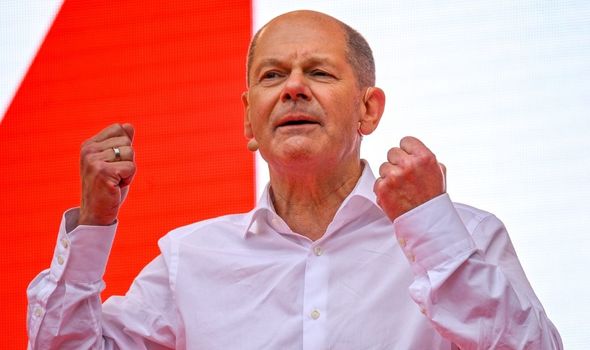 6 hours ago22:00Millions of Germans set to vote in election

The German election will see millions of people visit polling stations on Sunday to cast their vote.

Polling stations will open at 8am local time and close at 6pm.

The leading candidates are Armin Laschet from the CDU and Olaf Scholz – currently the Finance Minister in the coalition Government – from the SPD.