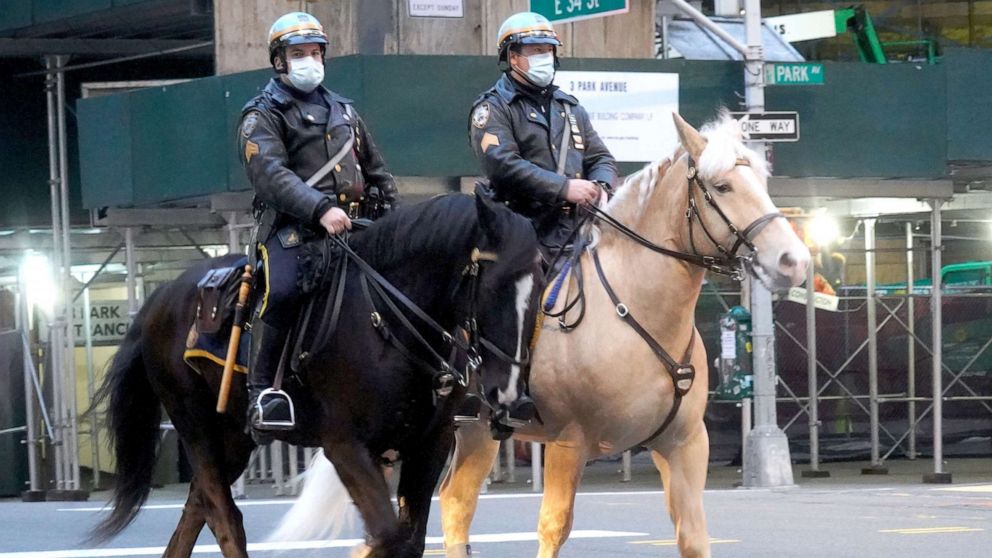 The images of Border Patrol agents on horseback confronting Haitian migrants in Del Rio, Texas has put scrutiny on the appropriate use of mounted units by law enforcement agencies.

White House press secretary Jen Psaki called the images and videos “horrific” and said that President Biden felt the same although adding that exactly what happened is unclear and still under investigation. Vice President Kamala Harris called the scene “horrible” and said, “human beings should never be treated that way.”

Lawmakers from the Congressional Black and Hispanic caucuses expressed their outrage, including Democrat Maxine Waters, of California, who said “what we witnessed was worse than what we witnessed in slavery.”

The incident comes two years after footage surfaced showing two Galveston, Texas police officers leading a Black man down the street by a rope, sparking outrage. The chief of that department apologized for the incident and said the officers used “poor judgment.”

And it also comes after the use of police horses to perform crowd control during protests in the wake of the death of George Floyd sparked controversy. In Houston, a protester sued after being trampled by a horse — an incident for which the mayor apologized.

For several reasons, horses are viewed as a viable tool for officers who need to access rough terrain, according to law enforcement and equestrian experts. However, the experts warned that the use of horse patrols for tense situations, like at the border, is not only potentially detrimental to the officer on the saddle, but puts the horse and public at risk.

“There are certain things you can do to take a mounted officer on a horse safely. If you get a horse to react, they can be very dangerous to everyone,” Brian Higgins, the former chief of the Bergen County Police Department and former mounted officer, told ABC News.

Higgins and an equestrian expert interviewed by ABC News said there needs to be more coordination and training to avoid the potentially dangerous situations similar to what happened at the border this week.

Higgins, who works as an adjunct professor at John Jay College of Criminal Justice in New York, said there is still a need for mounted patrols despite the growth of automobiles and other technologies such as drones.

For sheriff’s offices and smaller police forces in suburban or rural areas, the equines are the only means to traverse hilly woods or rugged deserts, he said.

“They provided an advantage back then for patrolling and getting to areas we can’t get to,” he said referring to his tenure on Bergen County mounted unit. “A car can’t get through some of the tight spaces.”

Horses have been used by Border Patrol agents for decades because the land on the Southern border isn’t paved in many cases and the terrain is arid and uneven, U.S. Customs and Border Protection administrators have said.

Marty Irby, the executive director of Animal Wellness Action, an animal care non-profit, also told ABC News that domesticated horses are a good tool for police forces under certain conditions, such as patrolling parks like the National Mall or marching in controlled events like a parade.

Irby, a lifelong horse rider, however, said he was appalled by the images from the Rio Grande and warned that the situation could have been much worse.

Horses, he said, should not be used to intimate or threaten civilians, even during a police investigation. Furthermore being a prey animal, the equines are prone to fleeing and likely to knock the rider off their saddle.

In addition, Irby said he felt the imagery of a horse being used to round up Black people was “very clearly a violation of animal rights and human rights.”

“I can say from what I saw in the images displays a lack of concern or consideration for human rights and a humiliation of minorities,” Irby told ABC News.

The videos and photos taken by news outlets like Reuters, Al Jazeera at Del Rio depicted the mounted officers confronting the migrants at great speed and with sudden movements. One photo appeared to depict an agent snapping his horse’s reins in the direction of a migrant who then stumbles back into the river.

Federal investigators are trying to determine if an agent filmed in the incident was using his reins to control the horse and prevent it from falling into the water.

The Department of Homeland Security, which oversees Border Patrol, announced Wednesday that it placed the mounted agents on “administrative duties” while it investigates the incident. DHS and the White House said Thursday it temporarily stopped using horse patrols in Del Rio.

The leaders of Customs and Border Protection and the union representing the agents haven’t immediately commented on the incident. In the past, the agency said it prohibits excessive force.

Irby said there was no excuse for what he saw in the images.

“[The horses] are supposed to be used for policing they are not supposed to be rushing head-on into danger, which is what appears happened at the border,” he said.

Higgins said he couldn’t comment on the incident at the border, since there are still unknowns, including what type of resources were at the agents’ disposal to deal with the migrants crossing the border.

However, he did acknowledge that there are incidents where officers or agents don’t need to bring in horses to deal with the situation.

“You can get a four-wheel-drive vehicle. The technology is still progressing but you can get them off the beaten path,” he said.

Higgins said that recent calls for police reform have led to departments scaling back the deployment of their mounted units during emergencies or crowd control.

The NYPD has decreased its deployment of mounted unit, which is one of the largest in the country, at protests following the last year’s demonstrations, according to Higgins.

In addition, some departments, like the Baltimore Police Department, eliminated their mounted units in the last couple of years.

He said for some law enforcement agencies it isn’t too much of a loss because of the newer, cost-efficient technologies, like all-terrain vehicles, drones and thermal imaging.

Higgins said those cuts have been going on over the last couple of years as a budget-saving measure. When he served as Bergen County’s chief he eliminated its mounted unit in 2012.

He said for some law enforcement agencies it isn’t too much of a loss because of the newer, cost-efficient technologies, like all-terrain vehicles, drones and thermal imaging.

“It was a difficult decision but at the end of the day, would you rather reduce the horse or the cops?” Higgins said.

In the meantime, Higgins and Irby said if a law enforcement agency is planning on keeping or creating a mounted unit, time and money needed to be spent on properly training the officers and setting strict guidelines for their deployment.

Higgins said he spent weeks training with the NYPD’s mounted unit before he patrolled Bergen County on a horse. Many law enforcement departments don’t have those resources, according to Higgins.

“It’s not standardized across the country and that is a problem,” he said.