A look at best of the action from the final day of the 43rd Ryder Cup at Whistling Straits in Wisconsin.

Europe slumped to the heaviest defeat in Ryder Cup history as Team USA impressed in the Sunday singles to claim a dominant 19-9 victory at Whistling Straits.

Team USA took a six-point advantage into the final day in Wisconsin and required just 3.5 points in the Sunday singles to regain the trophy, with Steve Stricker’s team in command throughout as they secured their second successive home victory in the biennial contest.

Padraig Harrington’s team needed a comeback greater than the one produced in the ‘Miracle at Medinah’ in 2012 to retain the trophy in unlikely fashion, three years on from their impressive success in Paris, although were largely second-best as they failed to put any pressure on the home side.

Rory McIlroy led Europe out in the opening match for the third consecutive Ryder Cup, despite losing all three of his matches over the first two days, with the Northern Irishman visibly emotional after avoiding a winless campaign by seeing off Xander Schauffele 3&2.

McIlroy was the highlight of what was an otherwise embarrassing session for the visitors, with Patrick Cantlay rounding off his unbeaten debut by seeing off Shane Lowry 4&2 and Scottie Scheffler despatching Jon Rahm 4&3 to inflict a first defeat of the week on the world No 1.

Bryson DeChambeau ended Sergio Garcia’s 100 per cent record with a 3&2 win to leave the hosts on the brink of victory, with Collin Morikawa’s half-point against Viktor Hovland enough to ensure the Ryder Cup would be returning to American soil.

Morikawa became the second reigning Open Champion in a row to go unbeaten and clam the clinching point, just as Francesco Molinari did at Le Golf National, with the American celebrations already in full flow as they extended their record-breaking margin. 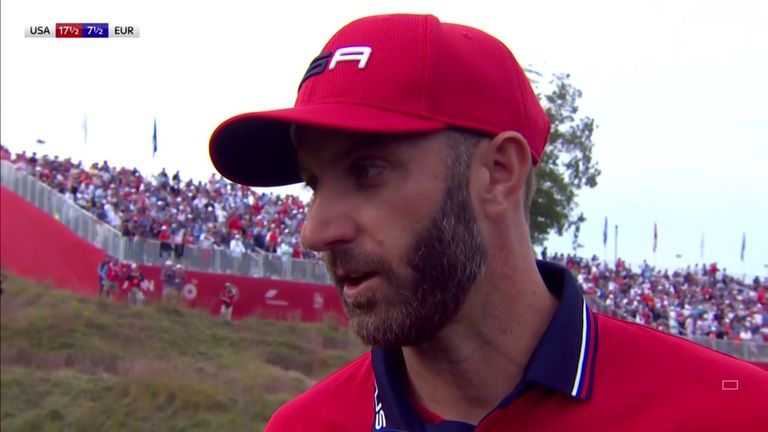 Brooks Koepka came through a tight tussle with Bernd Wiesberger to defeat the Austrian on the penultimate hole, while Dustin Johnson claimed a narrow victory over Paul Casey to become the first American since Larry Nelson in 1979 to win all five of his matches.

Ian Poulter – McIlroy’s foursomes partner over the first two days – also struggled to hold back tears as he maintained his unbeaten record in the singles by defeating Tony Finau 3&2, while Europe added another point when Lee Westwood won two of his last three holes to snatch a 1up victory over Harris English.

Tommy Fleetwood tied with Jordan Spieth to bolster Europe’s hopes of avoiding a history-making loss, only for Team USA to get to 19 points when Matt Fitzpatrick found water with his approach into the final hole and handed Daniel Berger a 1up victory.