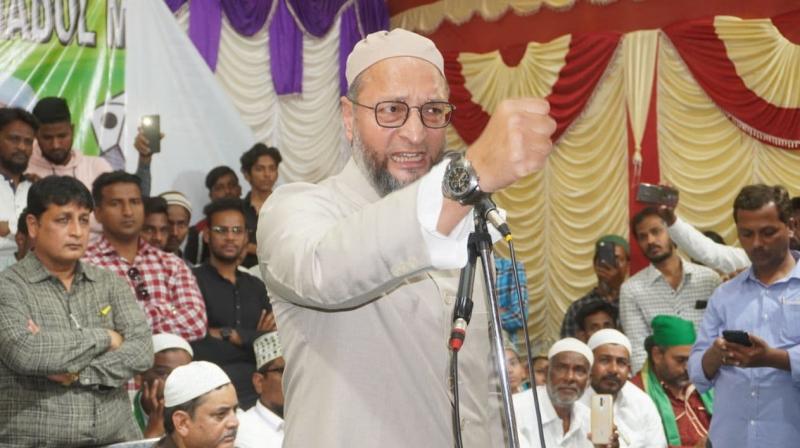 Lucknow: The decision of Asaduddin Owaisi's All India Majlis-e-Ittehadul Muslimeen (AIMIM) to contest the 2022 Uttar Pradesh Assembly polls on the main issue of giving leadership to Muslims has created an unease among parties which consider them as their core vote bank.

There are 82 assembly seats in the state where Muslim voters are in a position to make or botch political fortunes, but they have nothing in the name of political participation.

Whether it is the Samajwadi Party, which gets the most votes of Muslims, or the BSP, which talks about Dalit-Muslim unity for social justice, no one has given leadership to Muslims.

Owaisi is making this the basis of his election campaign in the state.

AIMIM national spokesperson Syed Asim Waqar told PTI on Sunday that the main goal of his party is to create a political thought and leadership among Muslims for the progress of their community and a better future.

"Even the so-called secular parties, which were getting the votes of Muslims, never allowed a Muslim leadership to emerge," he said.

He said that now when Owaisi is talking about giving leadership to Muslims, there has been "an uproar among the parties which consider this community as their political slave".

Opinion of experts differ on the question on whether Muslims, after the rise of Hindutva politics, have become aware enough to create their own acceptable leadership.

Political analyst Parvez Ahmed believes this time the 'Owaisi factor' will definitely have an impact on the assembly elections.

"The reason for this is that after the rise of hardline Hindutva politics in the country, a large section of Muslims has started to understand the importance of their separate leadership. SP, BSP and parties which claim to be Muslim friendly have kept silence on the issues of Muslims," he said.

The idea is now gaining strength in the Muslim community that if it does not have any leadership of its own, then the alleged atrocities against them will only increase, he added.

He said this time Owaisi is not on the target of BJP but those parties which till now have been trying to get Muslim votes by creating fear of the BJP among voters.

"These parties are doing such propaganda that Owaisi is trying to benefit the BJP by cutting Muslim votes in the state," he said.

Ahmed said that a section of Muslims are pondering over what harm the BJP has done to them.

"The Muzaffarnagar riots, which left a mark of fear on the minds of Muslims, took place not during the BJP regime but during the SP rule. During the regime of Yogi Adityanath, there was no such riot in which Muslims were specifically targeted. The share of Muslims in government jobs in the state is less than two percent, while the Congress and other non-BJP governments have ruled the state for the longest time," he said.

According to Census-2011 data, the share of Muslims in the population of the state is 19.26 percent. Muslims can play a decisive role in the 82 assembly constituencies out of the 403 in the state.

Political analyst Rasheed Kidwai believes that the issue of giving leadership to Muslims has come to the fore in more or less every assembly election in the state, but it never took off and Muslims often vote for the SP or BSP.

"Different sections of Muslims and their own aspirations have also been an obstacle in the way of giving them a universal leadership. This time in the assembly elections, there is not much awareness among Muslim voters about preparing their leadership," he said.

He said that Owaisi is trying on the model of the last assembly elections in Bihar and Maharashtra.

"He got success in Bihar because he had got some good candidates who had their own mass base. But in Uttar Pradesh, Owaisi does not seem to get much success as most of the Muslims in Uttar Pradesh have been voting outright for the same party which is capable of defeating the BJP," he said.

However, Kidwai believes that in recent times, a kind of political extremism is coming in the country, which is currently not possible to stop.

"In such a situation, there is definitely a desire for a leadership among the Muslims, but the point of departure has not yet come that they should recognise any one party as a universal leadership," he said.

The AIMIM has decided to contest 100 assembly seats in Uttar Pradesh.

Through this, he is hoping that the new formula of backward classes and Muslim voters will prove to be effective. It remains to be seen how this exercise turns out.