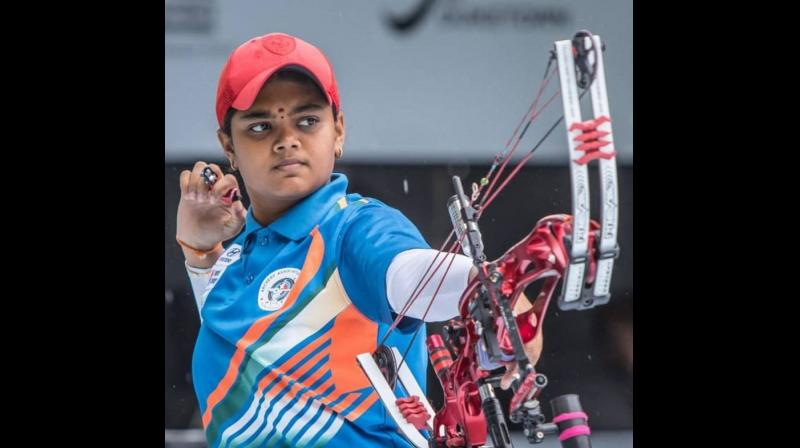 Telugu girl and Indian archer Jyothi Surekha is clearly at her very best. She scripted history by becoming the first Indian to bag three medals (silver) — individual, compound team, and mixed team events — at the World Championships in Yankton, USA, on Saturday. With this, her overall tally of medals at the World Championships is now six, which is another record in itself.

“It’s overwhelming! It’s always a great feeling winning medals for the country,” says Jyothi on a telephone conversation from the US, while adding right after that the thought of three medals is yet to sink in.

“We all had an ice cream party and a cool get-together, congratulating each other on the way we performed.”

However, she’s still smarting from not having won beyond silvers here. “All in the team had kept pushing for gold and gave their best. But it just wasn’t our day,” she comments.

The 25-year-old computer engineer, who’s the youngest recipient of the Arjuna Award, had won two bronze medals at the 2019 World Archery Championships. Naturally, winning World Championship medals is pushing her to excel further.

“I hadn’t expected a medal this year but I was confident that we’d come back home with a medal. So, I’m lucky,” she puts in modestly. “But nothing would’ve been possible without the team’s support; they were constantly motivating each other and always charged up.”

With preps for the World Championship beginning a month ago, Jyothi and her team also had tough practice sessions apart from physical exercises. “We knew that World Championship is the biggest event, so we were all prepared for it. Also, the coaching and the support staff were with us all through so that we’d give our best,” she says, thanking her coaches J Rama Rao and Jeevan Jyothi Singh Teja.

“And despite India having won medals in the recently concluded Olympics, there wasn’t any pressure on us to win medals. I hope these wins inspire more people to take up the sport.”

The wind in her sail

However, archery is an expensive sport and not all can take it up. But Surekha reminds us that the Government has initiated ‘Khelo India’ programme to spot talent and provide athletes with the required facilities. “If you have it in you, there’re several options to rise in the sport,” she adds.

However, Jyothi credits her parents for her growth. “I began the sport when I was only 10 years old. In fact, it was my parents who decided that I get into archery,” says Jyothi. “They’ve been with me through all my ups and downs, never discouraging me even when I didn’t win medals. So whatever I’m today I owe it to them.”

Sharing more insights on her parents’ contribution in her victories, Jyothi speaks of the initial struggles they went through. For starters, Jyothi had to switch to archery from swimming. Then several naysayers wondered why her parents pushed her into sports without a ‘backup plan’.

“But my parents never let such things affect me; they took everything in their stride and trusted me. Because we know performance does the talking,” she adds. Commenting on the increasing number of women bringing glory to the country through sports, Jyothi reiterates the need for parents to support their daughters.

Meanwhile, the archer’s father, Surendra Kumar, hopes that this performance would earn her a Khel Ratna or Padma Shri Award.