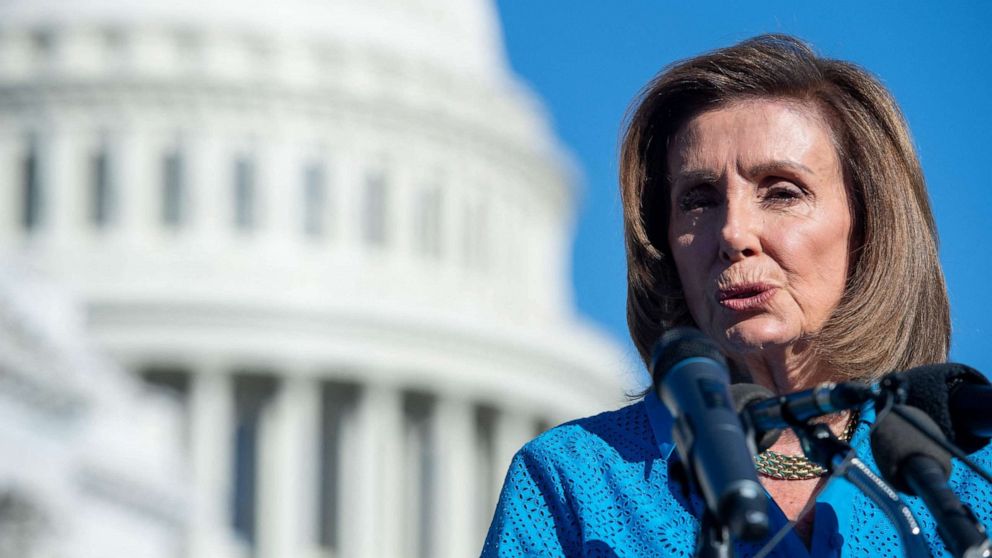 There are three mammoth bills, two enormous deadlines and one big collective legacy to be defined – by a pair of veteran Democrats who need each other to make it happen.

House Speaker Nancy Pelosi is framing the high-stakes action coming to the House floor as an opportunity to enact “the vision of Joe Biden,” as he told ABC’s George Stephanopoulos on “This Week” Sunday.

That and more is at stake this week, in what could be the biggest votes in the long careers of both the House speaker and the president. Pelosi and Biden need a nearly unanimous Democratic Party to cast risky votes that carry uncertain payoffs, with failure on all or part bringing potential calamity.

Already, the timeline and price tag of key components are slipping, as was inevitable, and the president said Sunday that action should “take the better part of the week.”

The long-promised Monday vote on the bipartisan infrastructure bill is most likely getting pushed back, and a Senate vote to keep government funding flowing will almost certainly fail on Monday given complete GOP opposition.

Biden’s sliding approval rating and spotty direct involvement continue to be a factor. So does the mistrust between the moderate and progressive wings that Pelosi is struggling to unite.

There’s a lot of truth here: “Overwhelmingly, the entirety of our caucus – except for a few whose judgment I respect – support the vision of Joe Biden,” Pelosi said on “This Week.”

Biden and Pelosi have both been in a position where they need to respect all Democrats’ judgment, because the obvious alternative if failure. Their most potent argument from here is that failure is possible – one of the few things all Democrats definitely agree on at the moment.

An investigation of border patrol agents on horses appearing to whip migrants is ongoing, but Texas Gov. Greg Abbott is making his support for those agents clear.

“If [Biden] takes any action against them whatsoever, I have worked side-by-side with those border patrol agents, I want them to know something. If they are at risk of losing their job at a president who is abandoning his duty to secure the border, you have a job in the state of Texas,” said Abbott on Fox News Sunday. “I will hire you to help Texas secure our border.”

If an investigation determines that the law enforcement officers in those controversial images acted inappropriately, Abbott’s commitment to employ them despite potential misconduct would undermine Biden’s attempt at holding them accountable.

The idea also highlights an aspect of police reform that Democrats hoped to address in the now-dead George Floyd Justice in Policing Act: handling law enforcement officers who are reprimanded or terminated by one agency only to be employed by another. The legislation aimed to create a national police misconduct registry.

The issue, along with so many other aspects of police reform, remains unaddressed after the breakdown of Senate negotiations.

The validity of the 2020 presidential election in Georgia has been backed by several investigations, a statewide hand recount, a statewide voting machine recount and a voter signature review in one of the state’s most populous counties. Still, former Trump continues to deny the evidence to the extent of endorsing Georgia Secretary of State Brad Raffensperger’s Republican primary opponent, Rep. Jody Hice, who challenged November’s election results in Congress.

Trump’s adamance to oppose history also includes targeting Republican Gov. Brian Kemp, of Georgia, who refused to get involved in overturning the outcome of the election despite being pressured to do so by the former president last year. Trump’s apparent fixation on Kemp even caused him to go off-message at Saturday’s rally, which was meant to support pro-Trump Republican candidates in upcoming elections.

Instead, Trump said voting rights advocate and possible Democratic gubernatorial candidate Stacey Abrams would make a better executive than Kemp. “Having her, I think, might be better than having your existing governor. It might very well be better,” Trump said of his fellow Republican. Abrams is popularly credited with successfully mobilizing voters and turning Georgia blue.