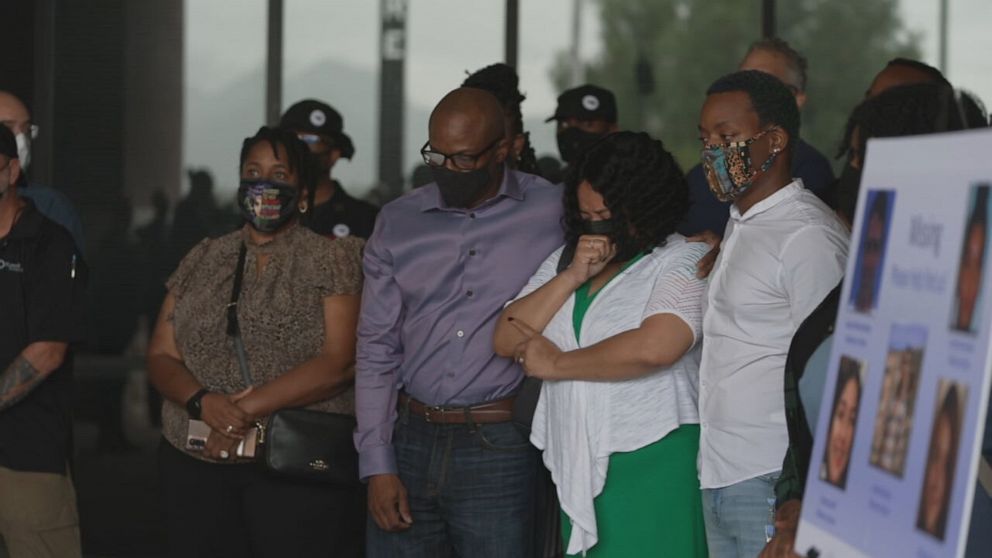 Daniel Robinson was last seen 50 miles southwest of Phoenix on June 23. He is a geologist and was testing groundwater at a well site in a remote part of the desert when he went missing.

Since then, his father, David Robinson, has been desperately searching for answers to find his 24-year-old son.

“I only imagine every time I look out there, my son’s somewhere hoping that his dad will come find him, you know?” said David Robinson.

Despite the local Buckeye Police Department launching an extensive aerial and 70-square-mile ground search, the Robinson family say they feel let down by what they say is a lack of urgency and motivation by authorities in finding Daniel.

“I feel that there’s a lot of answers that wasn’t answered for me regarding my son’s case. I’m still searching for those answers and I’m going to keep trying until I get them,” said Robinson.

At the end of 2020, the FBI had recovered over 89,000 active missing persons cases and approximately 45% of those were people of color, according to the FBI’s National Crime Information Center.

“Often, and very often, people of color have to go through hurdles and do not receive the urgency that it takes to find their loved ones,” David Robinson said during a press conference.

Derrica Wilson is the co-founder of the Black and Missing Foundation, an organization aimed at drawing national attention to missing person reports of color.

“Oftentimes when Black and brown children go missing, they’re labeled as runaways. Runaways are not receiving the Amber Alert,” said Wilson. “When it’s an adult that’s missing — male or female, Black or brown — their disappearance is oftentimes associated with some sort of criminal activity… It really desensitizes the case and it dehumanizes them.”

With no new leads in their son’s case, on Sept. 26 the Robinson family held their own press conference outside the Buckeye Police Department, along with local community leaders to draw national attention to their son’s case.

Melissa Edmonds, Daniel Robinson’s mother, said that her son and his siblings dreamed of making an impact.

“With all the global warming and the changes in the climate, he just wanted to be a part of something great,” Edmonda said and that her son would joke with her about someday being in National Geographic magazine.

Edmonds said that her daughter, Davisha Davidson, was the one who told her that Daniel was missing. According to the police report, one of Daniel Davidson’s coworkers said he last saw him leaving the job site and driving off the road into the desert. Davidson was driving a 2017 blue Jeep Renegade around 9:15 a.m.

“I contacted the Buckeye Police Department, informing them, our son, geologist Daniel Robinson, has been missing for over 12 hours,” said David Robinson. “I did ask them to go search in the desert for my son and being that it was night I was told by an officer that they would try to do it in the morning.”

According to the police report, a responding officer called Daniel Robinson’s phone multiple times and then went out to search the area where he was last seen, but did not find him or his vehicle.

Concerned by the lack of answers from authorities, David Robinson drove more than 2,000 miles from his home in Columbia, South Carolina, to Arizona so he could search for his son.

“I made a quick decision, throw everything I had in my vehicle, and started heading up to Phoenix to go take care of my son,” said Robinson. “My son was my mission.”

On July 6, almost two weeks after Daniel Robinson went missing, the police department searched his home and found no indication that he had packed and planned for a trip of any kind, according to the police report.

Meanwhile, Robinson gathered a group of hundreds of local volunteers to lead a search party in the desert. Robinson said the group is organized to comb the desert a section at a time.

“We set up a tent on this little area over here for water, medical aid, things like that,” said Robinson, who added that there was a command center. “We send teams. Each team is responsible for their own grid.”

Nearly one month after Daniel Robinson’s disappearance, a break in the case came when a local rancher found his jeep in a remote part of the desert in a 20-foot ravine, about 4 miles southwest from his work site.

According to authorities, the vehicle was found rolled over on its side and the airbags were deployed, but Daniel Robinson’s body was not found.

His wallet, phone and keys were found inside the car and a pile of his clothes were found nearby, said officials.

David Robinson said the Buckeye Police had told him they believe that his son was in a car accident and may have sustained a head injury. The police said they had ruled out foul play.

On Sept. 23, the Buckeye Police Department released a report that outlined Daniel Robinson’s mental state in the days leading to his disappearance and said reportedly, “Daniel was acting off at the job site.” Separately, he was also reportedly acting strange with a young woman he met, while working on the side for a food delivery service.

“[The detective] said that he believed our son was delusional after the head injury. And he walked away and may have rested somewhere,” said Robinson, who wasn’t satisfied with that conclusion. “I decided to bring on a private investigator because I wasn’t getting answers that I need.”

Robinson hired Jeff McGrath, who said he downloaded the Jeep’s so-called black box and allegedly found things that concerned him.

“I don’t know if somebody is joyriding in this car; found it and decided they wanted to crash it. If somebody was trying to make it look like somebody was injured or died in this vehicle. I just don’t know what happened,” McGrath added.

McGrath said he reached out to the Buckeye Police Department to share his findings, but said he’s been met with difficulty.

“I have relayed all my information to them. I don’t think they want to hear what I have to say,” said McGrath.

Authorities have maintained an “open line of communication” with the Robinson family and their private investigator, the Buckeye Police Department told ABC News.

They said they are utilizing every resource possible to locate Daniel Robinson including assistance from partner agencies and information provided by the public. They also said they have conducted four ground searches and three aerial searches.

For now, Daniel Robinson’s family says they are hoping to find their son and to help draw attention to other families with missing loved ones.

“I plan to stay in Arizona until my son is found. I’m here for my family, staying on the front line, for them,” said David Robinson. “We have to have somebody here until he’s found.”