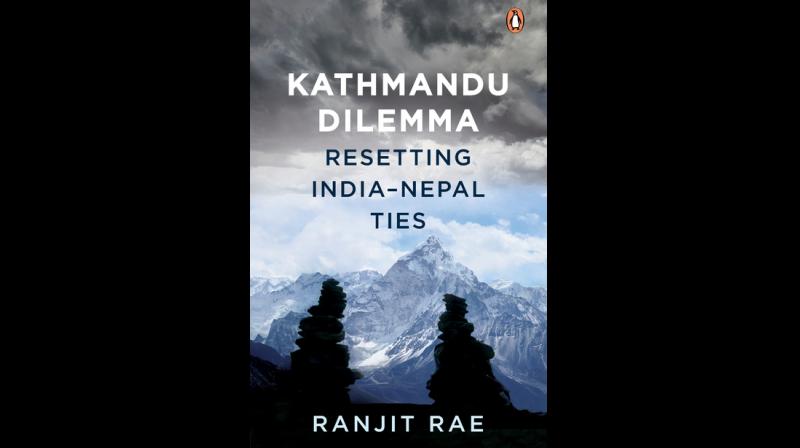 On one of my trips to Delhi after the [2015 Nepal] earthquake, I met Prime Minister Narendra Modi at his Lok Kalyan Marg residence. The first question that he asked me was: ‘Why don’t they like us?’ We have done so much for Nepal and this is how they respond, or words to that effect. This chapter is an attempt to respond to the question.

I start with some personal recollections that will provide a flavour of the nature and complexity of the India-Nepal relationship.

As was my wont, I used to meet the top Nepali leaders from all political parties informally on a regular basis. I was meeting Madhav Kumar Nepal, a senior leader of the Communist Party of Nepal (Unified Marxist-Leninist), or CPN (UML), at his modest home in Koteshwor early in my tenure as an ambassador. We were feasting on the delicious Malda mangoes, similar in taste to the langra variety from Banaras, and speaking to each other in Hindi. Madhav Nepal looked at me and asked why India talks about bhai bhai ka rishta (fraternal relations) between the two countries. In such a relationship, there is always an elder brother and a younger one. Nepal did not want to be the younger brother. It only wanted to be friends with India… Perhaps he had in mind remarks made by the late Sushma Swaraj, the then external affairs minister, who was fond of saying that India was not a Big Brother, India was an elder brother that looked after its younger kin! She was genuine in her affection for Nepal, but the Nepalese found this patronising.

A football match was taking place at the Dasharath Stadium in Kathmandu. Nepalese are crazy about football, though cricket too is growing in popularity among the youth. This was a face-off between India and Afghanistan in September 2013. And India was at the receiving end of the crowd with catcalls and boos and shouts of Dhoti, a term which the Indian footballers would have been perplexed about. Dhoti, the dress of the Indian plains for men, is a generic term of abuse for the Madhesi community from the Terai, who are culturally and ethnically different from the Pahadis. The Madhesis are more a kin to the people of UP and Bihar. The default position in the valley if there is any contest between India and a third country team, even if it is Pakistan, is to support that team!

Early in my tenure, I was travelling in the Flag Car to Hanuman Dhoka in the heart of Kathmandu. Somewhere near New Road, we saw a gathering of youth wearing tee-shirts emblazoned with the slogan, “Buddha was born in Nepal”. This is a historical fact; Buddha was born in Lumbini, which is now in Nepal. My personal security officer became nervous as we neared the demonstration. He said that we should immediately turn back. We returned. I kept wondering why there was a need for Nepal to reiterate through a public demonstration the fact that Buddha was born in Nepal.

An innocent comment by External Affairs Minister S. Jaishankar at a Confederation of Indian Industry-sponsored webinar in August 2020 that the Buddha was one of the two greatest Indians ever, led to a storm of protests in Nepal. Buddha was not Indian, the Nepalese asserted. Intellectuals, former bureaucrats, and even a former PM said that this was a mischievous remark. The Ministry of Foreign Affairs of Nepal released an official statement. Reference was made to PM Modi’s speech to the Nepalese Constituent Assembly in 2014, where he affirmed that the apostle of peace in the world, the Buddha, was born in Nepal. The Ministry of External Affairs of India calmed the situation by saying that there was no doubt that Gautam Buddha was born in Nepal and that the EAM was referring to the shared Buddhist heritage of both India and Nepal. Nepal deeply cherishes the fact that the Buddha was born in Nepal; this is linked to its national identity. It vigorously opposes what it sees as attempts by India to expropriate this heritage.

Another recent incident clearly reflects Nepal’s desire to assert its own cultural identity as distinct from India. Prime Minister K.P. Sharma Oli commented last year on the birth anniversary of Bhanubhakta, the great Nepalese poet who translated the Ramayana into Nepali, that India had twisted historical and cultural facts to create a fake Ayodhya in India, and that the real Ayodhya was near Birganj in Nepal. "We did not give Sita who was born in Janakpur to an Indian prince but Sita was married to Ram of Ayodhya, not the one in India." In a similar vein, on the International Day of Yoga, 21 June 2021, Oli asserted that yoga originated in Nepal and not in India. Incidentally, Oli’s ancestors, Kumai Brahmins, would in all likelihood have migrated from the Kali Kumaon region of Uttarakhand!

What I have narrated are some anecdotes from the Kathmandu valley that reflect the mindset of the valley, home to the ruling elite of Nepal. The Valley dominates the politics of Nepal. Indeed, in the old days, it was the valley that was known as Nepal. This mindset is more prevalent in the leftist and communist forces, less so among the democratic forces such as the Nepali Congress, and not at all among the Terai-based parties. But this sentiment is growing among the Nepali youth and is something that India needs to be sensitive to.

What is Nepal’s own sense of its identity? Given the asymmetry in size and in population, the fact that Nepal is surrounded on three sides by India engenders a siege mentality. The Nepalese also dislike and resent their utter dependence on India. Therefore, they try and fight geography! Two unique markers that Nepal has claimed for its own national identity are being the birthplace of the Buddha and home to the highest peak in the world, Mount Everest. Unfortunately for Nepal, both these markers are shared, the former in terms of the common Buddhist heritage with India, and the latter with China.

The treatment meted out to the Hindi language also goes to the heart of Nepali identity. Even though Indian soap operas and serials as well as movies are very popular in Nepal, and most Nepalese understand Hindi and speak it, and it is the lingua franca of the Nepalese Terai, the language has no official status in Nepal. Till recently, it could not be spoken in the Nepalese Parliament… Three Nepalese prime ministers and scores of other politicians, judges and senior bureaucrats have studied at Banaras Hindu University and are fluent in the language, but would be loath to speak it in public. A former Vice-President of Nepal, Parmanand Jha, a Madhesi from the Terai, decided to take his oath of office in July 2008 in Hindi. This was later declared to be void by the Nepalese Supreme Court. Despite the court decision, Jha refused to take the oath in Nepali. It is only after the interim Constitution was amended to allow for the oath to be taken in the mother tongue that Jha was again sworn in as Vice-President in February 2010. This time he took his oath in Maithili, his mother tongue, and Nepali.

Sometimes small issues assume crisis proportions. A false rumour was spread in Nepal in 2001 that actor Hrithik Roshan had issued a statement saying that he hated Nepalis. This led to days of rioting in Kathmandu with four people killed in street violence directed against the Madhesi community. Roshan’s films were banned and there was fear that if the situation was not brought under control, the Indian community could be targeted…  In 1998, actor Madhuri Dixit, on arriving in Nepal, reportedly made a statement that Nepal was once a part of India, provoking huge protests.

Of course, the Nepalese are a proud people and particularly so of their martial prowess and military valour. The Shah Empire extended to Kangra, then a small kingdom in Punjab in the west, included Garhwal and Kumaon and stretched all the way to Sikkim and Darjeeling in the east. This “Greater Nepal” existed for some 25 years before it clashed with the British East India Company in the famous Anglo-Nepalese wars of 1814 and 1815 and lost its possessions to the west of the Mahakali River and east of the Mechi River. At one time, Nepal had also fought wars with Tibet. The descendants of the Shahs and the Ranas that subsequently ruled Nepal under a treaty relationship with the British, saw themselves as conquerors and victors and hence the natural ruling elite of Nepal. Even the British were greatly impressed with the courage and bravery of the Gorkha soldiers during the Anglo-Nepal wars. They used Nepalese forces to suppress the First War of Indian Independence in 1857 and to this day, the Nepalese Rana refer to the Loot of Lucknow that added significantly to their coffers. Rana forces under Jung Bahadur Kunwar (subsequently Rana) were given several days to pillage this rich city.

Even as Nepal is justifiably proud of the fact that it has never been colonised unlike India, formal public statements of its contemporary leaders are always full of terms such as national sovereignty, national pride and glory, respect, honour, equality, we will never bend, etc. — statements that are normally not heard in old established nations that have existed for over 200 years as independent entities. Indeed, in a famous speech to the Constituent Assembly of Nepal in August 2014, Prime Minister Narendra Modi affirmed India’s respect for Nepal’s sovereignty to thunderous applause and thumping of desks from the leaders and members present. Why does Nepal constantly talk about preserving and protecting its sovereignty? Why does it need an affirmation of its sovereignty from its neighbours?

Excerpted with permission from the chapter titled, “Why Don’t They Like Us? Identity, Nationalism and Mutual Perceptions”, Kathmandu Dilemma.