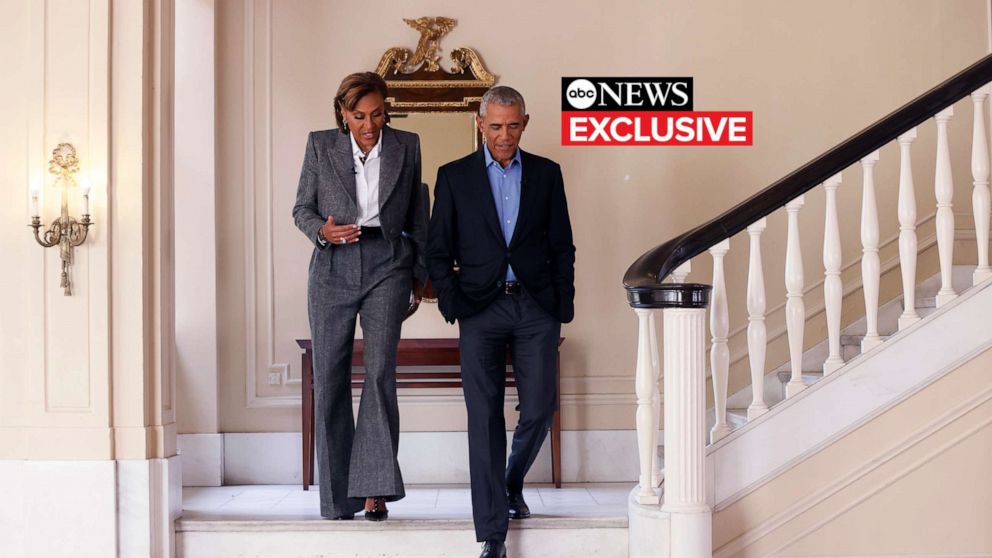 President Biden’s far-reaching multitrillion-dollar domestic agenda, in peril because of Democratic infighting, is getting a prominent boost from former President Barack Obama, who told ABC News in an exclusive interview that the country “desperately needs” the programs and that he supports taxing the wealthy to help support the package.

“You’re talking about us stepping up and spending money on providing childcare tax credits — making those permanent to help families, who for a long time, have needed help,” Obama told “Good Morning America” host Robin Roberts.

“You’re looking at making our infrastructure function more efficiently … you’re talking about rebuilding a lot of buildings, roads, bridges, ports so that they are fortified against climate change. And also, that we start investing in the kinds of energy efficiency that’s going to be required to battle climate change.”

The former president’s comments come as ongoing disagreements between progressive and moderate Democrats in the House delayed a vote on a sweeping $1.2 trillion bipartisan infrastructure bill that passed in the Senate on Aug. 10.

The legislation bolsters funding for the country’s infrastructure — from roads and bridges to transit systems and the electricity grid.

Progressives have indicated that they will not vote on the infrastructure bill until the larger $3.5 trillion so-called “human infrastructure” bill is also ready for a vote, but some of the contents of the larger bill, as well as disagreements over how to pay for it have been a point of contention among Democrats.

The $3.5 trillion bill is a 10-year spending plan that covers a host of Democratic priorities, including investments in health care, child care, eldercare, universal preschool, free community college, as well as efforts to combat climate change.

Republicans and some moderate Democrats have raised concerns over the price tag of the package, while House Democrats have sought to offset the costs by raising taxes on wealthy Americans and corporations — a proposal that Obama said he supports.

“It’s paid for by asking the wealthiest of Americans, who have benefited incredibly over the last several decades — and even in the midst of a pandemic, saw their wealth and assets rise enormously — asking them to pay a few percentage points more in taxes in order to make sure that we have a economy that’s fair for everybody,” Obama said.

“I think anybody who pretends that it’s a hardship for billionaires to pay a little bit more in taxes so that a single mom gets childcare support or so that we can make sure that our communities aren’t inundated by wildfires and floods and that we’re doing something about climate change for the next generation — you know, that’s an argument that is unsustainable,” he added.

White House press secretary Jen Psaki told reporters Thursday that the administration is considering a “range of options” for financing the plan.

“Our bar has continued — has always been from the beginning, nothing that would raise taxes on anyone making less than $400,000 a year. And certainly we wouldn’t support anything that would,” she added.

Following the meeting with the president Pelosi indicated that a vote on the infrastructure bill in the House was set for Monday Sept. 27 — a timetable that she has since indicated could change.

“I’m never bringing to the floor a bill that doesn’t have the votes,” Pelosi told ABC’s “This Week” anchor George Stephanopoulos on Sunday.

“You cannot choose the date,” she added. “You have to go when you have the votes in a reasonable time, and we will.”

A White House official told ABC News on Monday that Biden, along with senior White House staff, spoke over the weekend with several members of Congress whose votes are key to getting the legislation passed.

“Engagement is happening through the weekend into Monday and it continues to be clear that there is strong resolve across the caucuses behind passing these bills so that our economy delivers for the middle class and not just those at the top,” the White House official said.