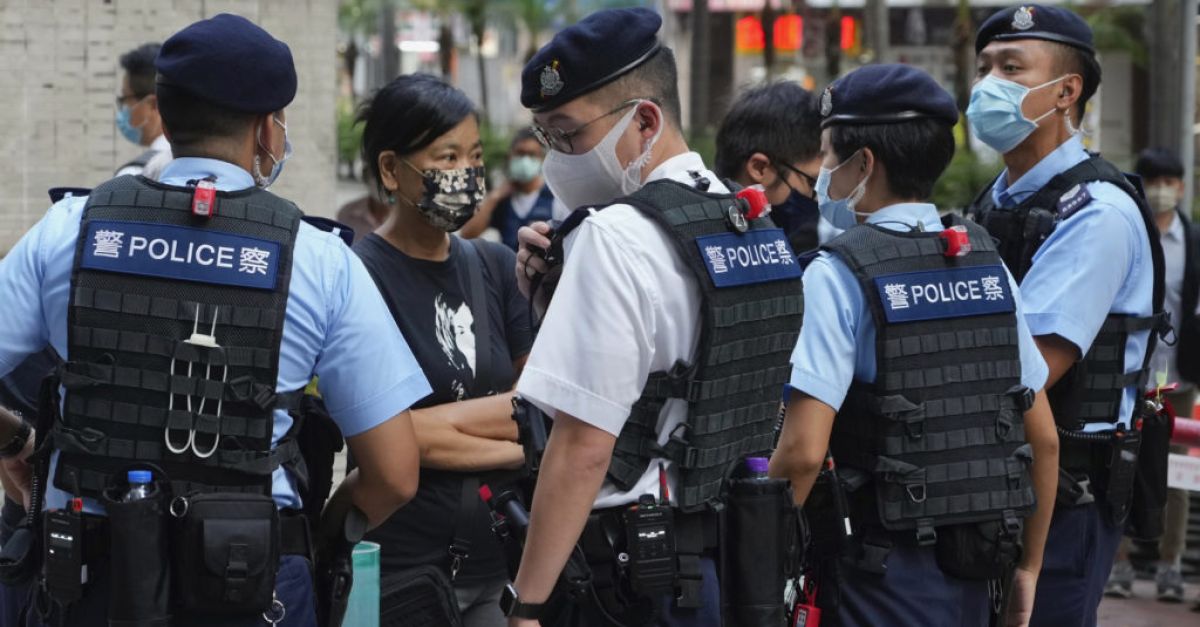 Police in Hong Kong have halted a four-person pro-democracy protest on China’s National Day amid an expanding crackdown on free speech and opposition politics.

Chanting and carrying a placard calling for the release of Hong Kongers arrested in the crackdown and chanting pro-democracy slogans, the four members of the opposition League of Social Democrats attempted to march to the harbour-side Convention Centre where the official celebration was being held.

Dozens of officers, part of a massive police presence deployed to prevent any disruption on the day, surrounded them and kept them out of sight and earshot of officials attending a flag-raising ceremony.

“I think Hong Kong is now the only place in China where diverse opinions are allowed,” Chan Po-ying, the party’s chairperson told reporters.

Mr Chan noted the extensive security measures deployed, but added: “Even under such pressure, we still need to hang on to our most basic civil rights, which is the freedom of speech and assembly.”

Restrictions have made such protests a rare occurrence and Hong Kong’s government has arrested three leaders of the group that organised an annual candlelight vigil commemorating victims of the military’s crushing of 1989 pro-democracy protests centred on Beijing’s Tiananmen Square.

The vigil has been the only large-scale public commemoration of the crackdown on Chinese soil but it has not been allowed for two years.

The leaders have been charged with subversion under a national security law imposed on the city by Beijing following months of anti-government protests that criminalises subversion, secession, terrorism and foreign collusion to interfere in the city’s affairs.

Such measures have led to the US imposing sanctions on Hong Kong and Chinese officials, saying the new law rolls back freedoms promised to the former British colony when it was handed over to China in 1997.

Over the past year, dozens of pro-democracy activists have been arrested and others have left for self-imposed exile abroad, while electoral laws have been amended to increase the number of seats for pro-Beijing legislators while reducing those that are directly elected.

In remarks at a reception that followed, Ms Lam praised the central government’s support for the economy, the stabilising effects of the security law and the “improved electoral system” while sounding defiant toward the US and other critics.

A recent Chinese Foreign Ministry report enumerating what it described as US political interference in Hong Kong shows that “despite a plethora of smearing and defamatory remarks made by foreign politicians and some Western media, Hong Kong’s inherent strengths remain intact”, Ms Lam said in her address.

On mainland China, huge crowds gathered to watch flag-raising ceremonies in Tiananmen Square and in cities across the country. This year marks the ruling Communist Party’s centenary, adding to the scale and lavishness of the celebrations. Friday marks the beginning of a week-long national holiday.

And despite heightened tensions between Beijing and Washington, US Secretary of State Antony Blinken sent a congratulatory message.

“As the United States seeks to work cooperatively to solve the challenges we all face, we wish the people of the PRC peace, happiness, and prosperity over the coming year,” the message said.