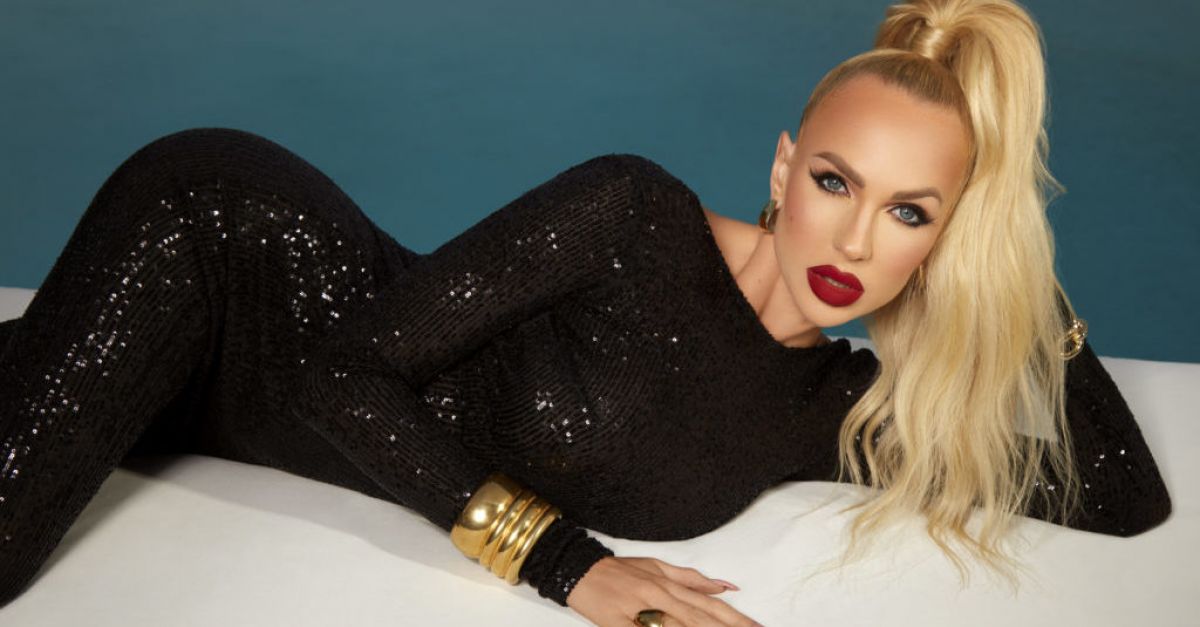 Nestled on a velvet sofa in her extremely posh London hotel suite, Christine Quinn is resplendent in purple pleather, the collar and sleeves of her jacket fringed with an explosion of marabou feathers.

Blonde hair cascading in waves, with two long, thin plaits framing her perfectly made-up face, and talons painted baby pink, the Selling Sunset star is every inch as glamorous in real life as she appears on the Netflix series.

Fans of the reality show – which followed the staff of LA-based luxury real estate firm the Oppenheim Group for three seasons, with the fourth and fifth on the way – might be wondering: is the resident ice queen as frosty in person?

“Hi!” Quinn says, jumping up from the sofa, greeting me with a dazzling smile and a warm hug. So far, so friendly. Does that mean the reality TV version of the Texas-born straight-talker isn’t entirely accurate?

“Not at all! No, no, no,” she says when we sit down to chat. “I love to play a character. I went into the television show, and I said, ‘Listen, I’m going to be remembered’. I said, ‘Whether you think I’m a b***h or I’m crazy, I’m actually genius, because everyone’s talking about me’, you know?”

The 32-year-old says her approach was “very similar to Paris Hilton and what she does – she’s so intelligent, but she’s known for this character”.

Now, Quinn is branching out into make-up with a five-piece collection created with British brand Ciaté London. Founder Charlotte Knight reached out to the beauty-obsessed reality star after watching Selling Sunset.

“She said, ‘I love the two sides to you. I love that you’re this fabulous villain that everyone wants to hate, but they can’t hate you, because you’re so interesting and funny. Then I see this sweet Barbie doll side to you too’.”

'A match made in heaven', we couldn't agree more @XtineQuinn ⚡✨ pic.twitter.com/hhvtDy5vvC

Inspired by that villain/Barbie split and a new technology Ciaté patented, the Under The Influence of Sass range features nude and deep red shades of Heat Transforming Lip Cream.

The collaboration took place during the pandemic, when Quinn was living at home in Los Angeles with her husband, tech entrepreneur Christian Richard, and gave birth to her first son, named Christian, in May this year.

“My birth experience was so traumatic,” she says. “I almost died, my son almost died. I had an emergency C-section. When we were filming [Selling Sunset], I got home from the scene, and immediately my water broke. So, you’re gonna see the whole storyline [in season four].”

Plus, pregnancy was a challenge for the usually impeccably glamorous blonde, who started to get hormonal acne.

“Not only did my skin change during pregnancy, but my hair started falling out. I felt so self-conscious about it. It’s something I really don’t like to talk about, because it was just so stressful. But, I mean, literally, having a human is a miracle. So, you know, I just looked at it as a little test from God.”

Following Christian’s birth, the new mum’s terrifying labour experience prompted her to reassess her priorities – and her social circle.

“It made me realise how short life really is. And it made me realise that I only want good people in my life. So, I started really condensing my friend group. Because [previously] I was the person that wanted to be liked by everyone.”

Quinn says viewers will see her being “a little bit more zen” in season four: “I was like, ‘I have real life problems going on girls, I don’t want to fight with you’.”

Fans may be dying for the show to return, but one person who won’t be watching? Christine Quinn.

“It was so important to me to have colours that were beautiful and neutral, with pops of glimmer and silver and gold, with a match to every skin tone.”

“These eye patches are so good. I always have them in my travel bag on the plane, and I use them before I’m doing make-up.”

“I love Sisley, it’s one of my favourite brands. That’s my nightly skincare routine, because I have dry skin naturally. I love the moisture of everything that Sisley does.”

“I love all of Kérastase hair products. They have a really great oil that I love.”

Festive fashion: 7 trends to know about

Explainer: Here’s what we know so far about the new variant in South Africa