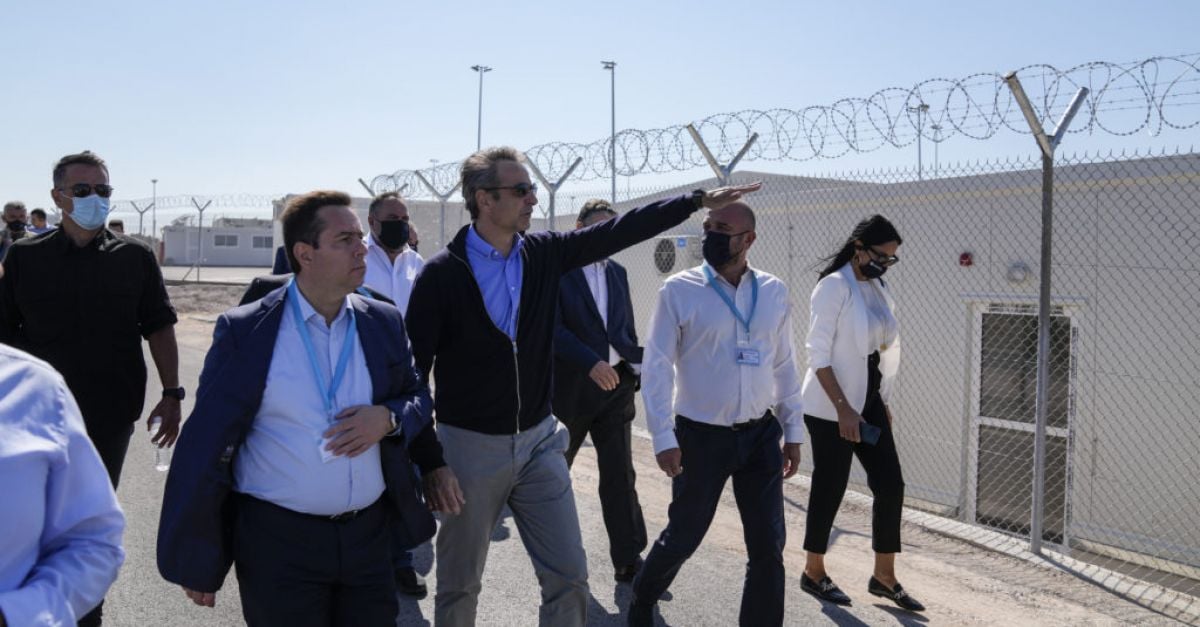 Greece’s prime minister has flown to the eastern Aegean island of Samos to view a new camp for asylum seekers that has replaced the island’s squalid facility.

Speaking in the remnants of the old camp on the edge of the island’s main town of Vathy, Kyriakos Mitsotakis said he would continue to press European Union countries to come up with a common policy that would share responsibility for migrants.

“We will continue to work in order to persuade those European countries who consider that this problem does not concern them, to change their stance and contribute to this big, joint European effort,” Mr Mitsotakis said.

Migrant entries into Greece have fallen by about 90% compared with those of 2019, the prime minister noted. “We have crushed the smuggling networks that were taking advantage of human pain and disappointment,” he said.

The camp at Vathy had become “a shame for human dignity”, Mr Mitsotakis said. Originally built to house just over 600 people, the camp become Greece’s most overcrowded, with around 7,000 people living in the facility and a shantytown of tents and makeshift shacks that sprang up in the olive groves around it.

A new £37 million EU-funded camp opened in September in the hills of Samos, away from the main town. Officially designated a “closed controlled access centre”, it consists of air-conditioned container housing in the form of family houses and dormitories, with a capacity of 3,000 people.

Officials say the facility is intended to house people temporarily for a few months while their applications are processed.

Although bleak, with row upon row of container housing in segments separated by razor wire-topped fences, conditions are an improvement on the Vathy camp.

Asylum-seekers are housed in neighbourhoods according to nationality, and there are basketball courts and playgrounds among the container housing. Currently around 300 people are living there, from Afghanistan, Syria and African countries.

But its remote location and stringent security has raised concern among rights groups.

“There is no doubt that this new centre will only further dehumanise and marginalise people seeking protection in the European Union,” medical aid group Doctors Without Borders, or MSF, said in a statement.

“Millions of euros have been spent on the construction of this facility that comes with military-grade barbed wire fences and advanced surveillance systems. All of this to detain people whose only ‘crime’ is seeking safety and stability,” MSF said.

“In addition to the mass rejections of asylum applications, this new centre is another symbol of the complete rejection of refugees and of their right to seek asylum.”

Greece plans to create similar camps on another four eastern Aegean islands that lie near the Turkish coast.

Mr Mitsotakis’ conservative government, elected in 2019, has cracked down on illegal migration, beefing up patrols on land and sea borders. It has come under strong criticism by rights groups, refugees and some EU officials who have accused Greek authorities of carrying out summary deportations of people crossing into Greek territory, without giving them the chance to apply for asylum.

Greece has expressed concern at a potential influx of people fleeing Afghanistan and heading to Europe after the Taliban takeover, and has made clear it would not allow large numbers of Afghans into the country.

It is, however, allowing in small groups. The government announced on Friday that 127 people — 26 female Afghan judges and lawyers with their families — had arrived in Athens the previous day and would remain in Greece until procedures were completed for their relocation to other Western countries.