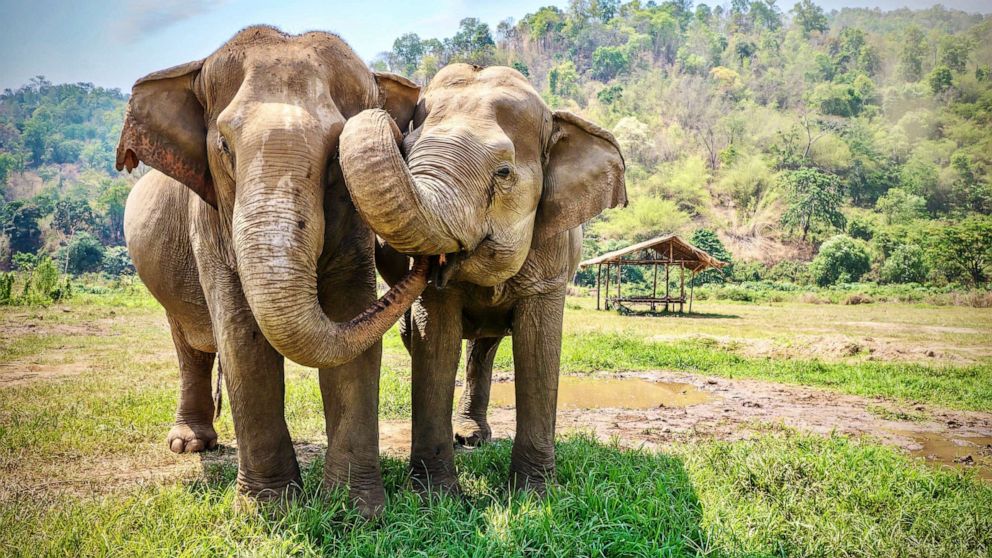 Cooperation lies at the beating heart of most societies. For Asian elephants in a recent study, a bit of teamwork helped them access delicious bananas. A new study examines elephants’ ability to work together for a reward and the circumstances that limit their capacity for cooperation.

Li-Li Li, a doctoral student at the Xishuangbanna Tropical Botanical Garden, part of the Chinese Academy of Sciences, said she chose to work on elephants because she had always longed to work with the biggest animals on the planet. Li and her colleagues also wanted to understand what motivated cooperation. Elephants, evolutionarily distant from primates, were a perfect vehicle for studying how cooperation could crop up in distant species.

Back in 2011, a group of researchers published a paper showing that Asian elephants in Thailand could cooperate to obtain food rewards on an out-of-reach table, using a rope they had to pull at the same time. They would wait for partners before pulling, showing they understood how cooperation worked and that their partner’s behavior mattered for success. But in that first study, the researchers paired the elephants, so they couldn’t choose their partners.

In the new study, published Sept. 28 in the journal PLoS Biology, the team of international researchers went further, offering a group of nine elephants free access to the testing table — handing the decision of picking teammates and figuring out how to cooperate to the animals themselves. They found that cooperation was maintained at a high rate (more than 80% of the time) even in the face of competition, and only broke down when the food on the table was limited and could easily be monopolized.

The complexity of cooperation, particularly in an experimental task, is rarely investigated outside primates or birds, the researchers said. The elephants in the study were part of the Myaing Hay Wun Elephant Camp in Taikkyi, Yangon, Myanmar, all owned by the Myanma Timber Enterprise. When logging was banned in Myanmar in 2016 these creatures retired from their work and came under the care of an elephant handler who works full time bathing and checking up on each elephant. The surrounding forests are also home to wild elephants. The retired, semi-wild elephants sometimes intermingle with them.

The retired elephants were subjected to a classic teamwork task, which was first developed in the 1930s and has been tested on species from otters to macaques. The elephants had to pull two ends of the same rope to access trays of bananas or tamarind balls.

In the first part of the study, there were two trays, so both partners could feast. But in the second part of the study, there was only one tray of tasty treats — so one partner could monopolize the food. That’s when the competition became more fierce, more intense, Li says, with more fights and more monopolizing of the treats. The allegiance broke down quickly from there.

Similar breakdowns in cooperation happen in other species, including humans, when benefits are reduced, said Alicia Melis, an experimental psychologist at the University College London in the United Kingdom who was not involved in the study. She pointed out that there are several different kinds of cooperation: One type is where both parties benefit, as in this teamwork exercise, and another, more altruistic, type is where one side benefits immediately and the other is just helping out for potential future benefits.

Melis has worked on similar experiments in bonobos and chimpanzees, and she said the elephant results aren’t terribly surprising: It could be that some higher-ranking individuals are monopolizing the food intake.

The problem of cooperation is cheaters, she said. Recognizing others’ contributions to the collaborative effort by rewarding them with part of the spoils is key to keeping collaborators motivated long term — and something that develops in children around age 3. Cheaters, those who plunder the spoils without collaborating, undermine this delicate balance.

“Other species, like the elephants here, or chimps in our studies, seem a bit more constrained in this regard,” Melis said. “The more dominant individuals monopolize the food, not rewarding partners, which leads to cooperation breaking down. However, if the monopolization potential is reduced by placing the food rewards far apart, they successfully coordinate their actions.”

Li said she learned that elephants have individual personalities and temperaments — and their own ways of dealing with others. Knowledge of the individuals and their personalities can help conservation of Asian elephants in China, where they number only around 300, and where she is evaluating the protected areas. Li said that in developing strategies to protect them, it helps to know if a group of elephants is a family or a loose herd of bachelor males. “Different elephants have different kinds of culture, as well as personalities.”