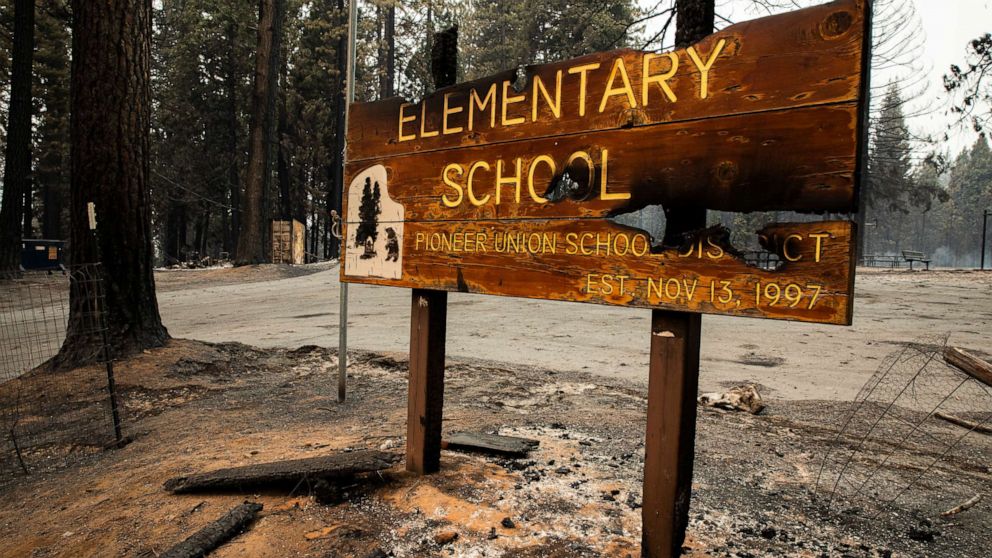 As the massive KNP Complex fire burned nearby in Sequoia National Park, Three Rivers Union School District Superintendent Susan Sherwood was in her school’s gym trying to clear out the smoke with fans. The air quality had gotten so bad and students were coughing and complaining of burning eyes that she made the difficult choice to close the one-school California district for nearly two weeks — the longest it’s ever had to close due to a fire in her 26-year tenure.

“We’ve had fires before, but this is a big one,” Sherwood told ABC News. “Everybody oohs and aahs at the lightning storms, but we don’t. We say, Oh no — fire.”

The KNP Complex, which was ignited by lightning on Sept. 9, has burned over 49,000 acres and led to hazardous air quality conditions in the weeks since.

The smoke got so bad one day in mid-September that Sherwood decided to send the K-8 school’s 100 students home to do independent study — an option offered statewide this school year due to the coronavirus pandemic. Back in school this week, they have to wear masks indoors, per COVID-19 mitigation measures, and are encouraged to wear them outdoors too due to the ongoing wildfire, which is 11% contained.

“This could go on for a while,” Sherwood said. “You can only take it one day at a time, and you always have to make decisions based on what’s best for the students and staff.”

The students at the tiny California school district haven’t been the only ones impacted by extreme weather events. Education publication The 74 recently estimated that over 1.1 million children have been kept out of classrooms so far this school year — from heatwaves in Colorado and Ohio to flooding and other damage caused by Hurricane Ida and its remnants in states including Louisiana, Maryland, Pennsylvania and New Jersey.

As of Tuesday, a month after Hurricane Ida made landfall in southern Louisiana, more than 70,000 students were still unable to return to their classrooms due to damage from the category 4 storm, state officials said — representing about 1 in 10 of the state’s K-12 students.

“I know of no state in the union that has faced more challenges than the state of Louisiana. Not only have we faced a global health pandemic, social and political unrest at times, but also a number of named storms that have been really aggressive and painful for our coasts,” state Superintendent of Education Cade Brumley told state lawmakers during an education committee meeting Tuesday. “Last year we faced Zeta, then Laura and Delta, and this year we have faced Ida.”

Over 300,000 students were forced out of the classroom after Ida made landfall on Aug. 29 near Port Fourchon, Louisiana, and in the weeks since school leaders have felt an “urgency” to reopen “as quickly as they possibly can,” Brumley said.

Many have tackled challenging issues like restoring power and running water, undergoing environmental tests and obtaining proper staffing and commodities. Some districts are also factoring COVID-19 testing into their reopening logistics. When New Orleans’ public school district started welcoming back students in mid-September, it relaunched free weekly testing for at dozens of school sites as well, and strongly encouraged students and staff to get tested as they returned in the wake of the storm.

New Orleans public school leaders reported only “minimal to moderate damage” from Ida, thanks in part to a $2 billion infrastructure investment after Hurricane Katrina.

Brumley pointed to the apparent success of buildings built post-Katrina to “weather the storm better.” But there are ways the state can improve, he said.

“As a state and as an educational community, we need to have a better playbook,” he said. “You plan for the worst and you adjust based on circumstances, but we need to be in a better position for that. And that is not in place in the way in which we would like it to be in place.”

“We have to think about how can we harden the grid, so to speak, so that our structures can withstand the elements of nature that are coming at us,” he continued.

Schools across the country need to made infrastructure improvements, in particular to withstand natural disasters, though according to a 2021 report from the American Society of Civil Engineers, there is a $38 billion annual funding gap to regularly upgrade public school facilities. One proposed congressional bill would put $40 billion toward green infrastructure projects and other improvements to help public schools prepare for the impacts of climate change.

Extreme weather events like hurricanes and fires are expected to become more destructive due to climate change. Addressing the climate crisis will be a “whole-of-society issue,” including the education sector, according to Aspen Institute senior fellow Laura Schifter.

Solutions could be anything from equipping schools with solar power so they serve as community hubs during power outages, to replacing asphalt with sustainable green schoolyards to reduce heat and flooding, to addressing eco-anxiety and trauma related to extreme weather events in students. Schifter pointed to organizations like The Trust for Public Land, which has transformed hundreds of asphalt schoolyards across the country into sustainable playgrounds, as one effort to address climate impacts in schools.

Virtual learning will be key to limiting learning disruptions due to extreme weather, K12 Climate Action said in its report, noting that measures enacted due to the pandemic have helped improve access, “the majority of those efforts are not long-term solutions and will expire within one to three years.”

“Seeing schools close on the West Coast because of issues with smoke … or schools here in Maryland forced to close for hot days because they have inadequate infrastructure — all of those things are going to continue to disrupt learning and are going to continue to be a problem for schools ahead,” Schifter said. “But one of the things that’s also really exciting about what schools can do is they can help communities build resilience in preparation for extreme weather, too.”