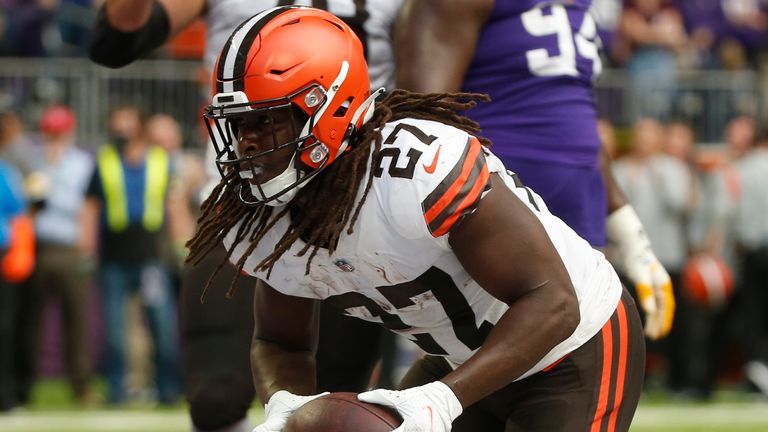 Highlights of the matchup between the Cleveland Browns and Minnesota Vikings from Week Four of the 2021 season.

The Cleveland Browns came away with a 14-7 win over the Minnesota Vikings after a defensive battle at U.S. Bank Stadium on Sunday.

The Vikings and Browns both came out of the blocks impressively on offense, the former scoring a touchdown on their opening possession, but just three points total would be scored in the second half – courtesy of a 53-yard Chase McLaughlin field goal for Cleveland.

Minnesota took the lead as Kirk Cousins capped a lengthy, 14-play, 75-yard drive with a 12-yard scoring strike to Justin Jefferson. The Browns answered back with a 15-play epic of their own, but then turned the ball over on downs as Baker Mayfield was sacked on 4th-and-4 from the Vikings six-yard line early in the second quarter.

Both teams would then go three-and-out on offense to hint at the struggles to come, but then after Minnesota too turned the ball over on downs with a Cousins incompletion from the Cleveland 36-yard line, Kareem Hunt would find the endzone for the visitors.

Cleveland ran another eight and a half minutes off the clock on this 18-play possession, and then added a two-point conversion – courtesy of a Mayfield pass to Austin Hooper – to inch into the lead. McLaughlin would add a 48-yard field goal in the final moments of the first half to make it a four-point advantage.

After the break, defense dominated, with the two teams combining for eight punts to open after the break until McLaughlin nailed his second FG of the game, midway through the fourth quarter, to make it a one-score game. And that’s how it stayed.

Next up for the Browns is a trip out to Los Angeles to take on the Chargers on Sunday.

As for the Vikings, they have an NFC North divisional clash at home against the winless Detroit Lions.