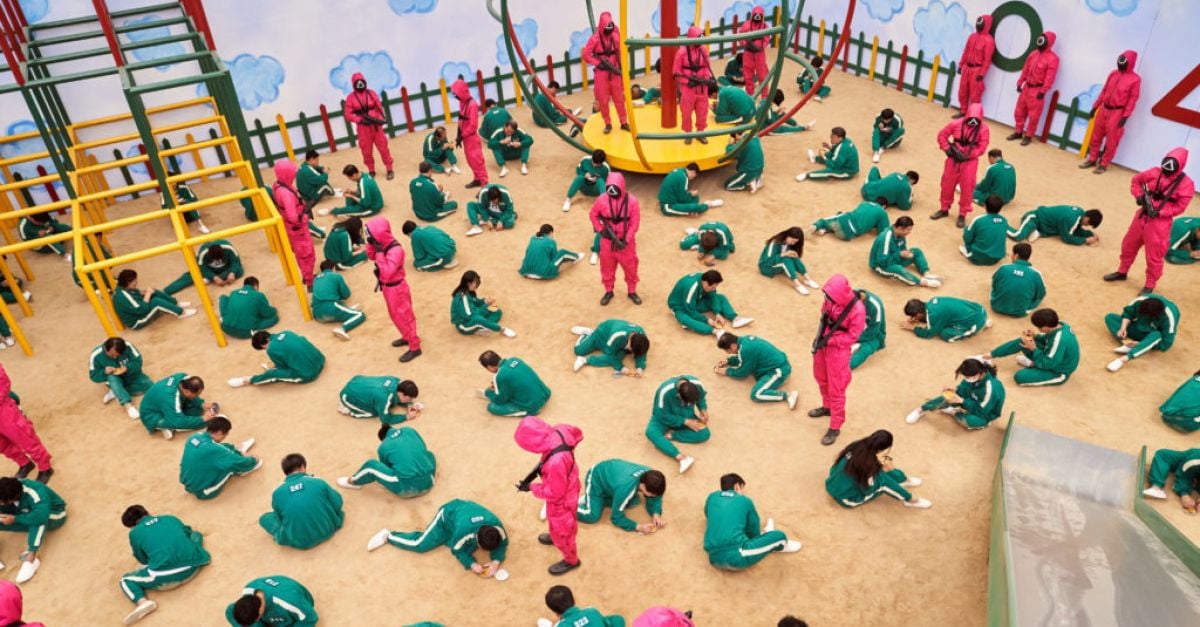 Have you watched Squid Game?! HAVE YOU?? Even if you haven’t (yet) the chances are you’ve already been asked this question multiple times, by multiple people, all of whom are wired from having binged every episode in a single feverish night.

The Korean show, created by Hwang Dong-hyuk, is Netflix’s latest colossal hit, and sees hard-up ‘players’ — each hoping to win a fortune — take part in a series of children’s games.

The twist being those games won’t end happily with a biscuit and a cup of orange juice like in actual childhood — instead, Squid Game is far, far deadlier…

So far, so dystopian, but why do we find such apocalyptic stories so gripping?

“Since the start of the pandemic, dystopia, apocalypse, infection films and games [have] just been hugely popular,” explains Professor Susan Watkins from the School of Cultural Studies and Humanities at Leeds Beckett University, an expert in post-apocalyptic writing. “

I think it’s because we’re living in apocalyptic and dystopian times, and people want to see what they’re experiencing worked out in imaginative forms.”

It may seem counterintuitive, admits Watkins, “you might think, ‘Oh people might want to escape reality’,” but in fact, “when reality is as dark as it has been during the pandemic,” consuming dystopian stories can become something people need.

Such stories and shows “allow us to think through what’s really going on,” and put into play important questions we may be grappling with on some level ourselves, like: “How much does the individual put their own concerns and objectives and desires first? How much do they try and work collectively? Where are the boundaries?”

The plight of the individual

Then there’s the fact many of us are a sucker for stories that revolve around a hero hoping to triumph.

“[We’re] rooting for the individual,” says Watkins. “Sometimes shows allow the individual to win through, sometimes not, but that’s what people are hoping for when they watch it, I think, and that’s why they appeal to us.”

She explains the idea of ‘Ustopia’ — a term coined by Margaret Atwood, author of The Handmaid’s Tale, to describe stories that combine dystopian and utopian elements, in a “mixture of possibility”, alongside classical dystopias — “which are all completely dark, no hope, no chance of beating the system” — and critical dystopias — “where there’s a little bit more hope for things to change, for the system to be challenged.”

Even if a character “doesn’t achieve any actual change or any actual effective resistance, it just allows people to think, ‘Well, how far would I go?’” Which is valuable in itself.

Another appealing factor, particularly for aficionados of the genre, are the many layers, references and callbacks in new shows — be it Squid Game, The Handmaid’s Tale or Y: The Last Man — to earlier examples, from Running Man to Battle Royale.

Watkins says many new shows are “incredibly adaptive and intertextual” and it can be comforting to see new stories tackle existing problems and work them out in a slightly different way.

“It’s one of the things making our world so scary,” she notes. “Even if/once the pandemic becomes endemic, we’ve still got climate change; it’s the next thing we need to address as a world.”

Squid Game is horrifying and addictive in equal measures.

Does she believe consuming dystopian shows, and being asked to consider apocalyptic situations, will help us create change in the future?

“I think that depends on whether you think that, as a species, we actually have got that adaptive potential,” she muses.

“That’s what a lot of my work’s about: how lots of these genres are very dark, but the possibility for adaptation and change that allows our survival, even if it’s in a very different form to what we were before [is possible].

“We have to believe in that potential for adaptive change and positive transformation.”