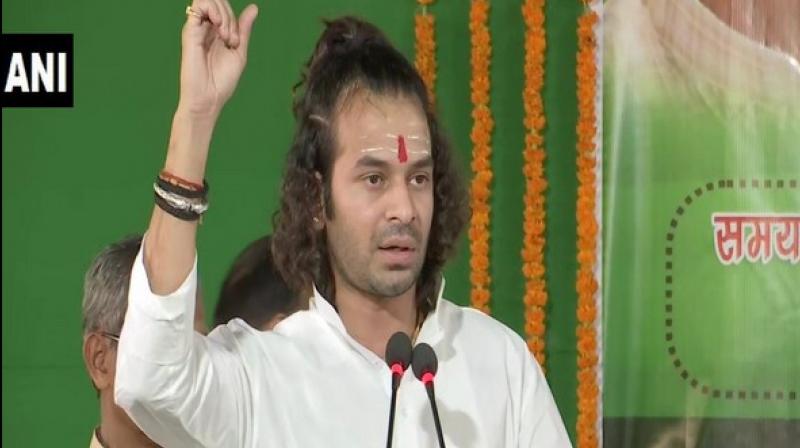 Patna: New fissures have surfaced in the Rashtriya Janata Dal as Tej Pratap Yadav has alleged that his father Lalu Prasad Yadav is being held “hostage” in New Delhi and someone in the party was trying to take the post of RJD president. This appears to be a clear attack on his younger brother Tejashwi Yadav.

“My father is not well and I don’t want to put any kind of pressure on him. But I want to say that few people in the party are dreaming of becoming party president. I am saying this because it’s been almost a year now since he was released from prison but he hasn’t come to Patna. I am aware that four or five people want to keep him away from party workers. The situation now is that he has been held hostage in Delhi”, RJD leader and Lalu Yadav’s older son Tej Pratap Yadav said, addressing a workshop by the Chhatra Janshakti Parishad, a social outfit floated by him.

More than the political temperature, it was a wave of shock for the Lalu Yadav family, the RJD, and the entire Grand Alliance when Tej Pratap made this statement publicly during an event in Patna. His statement is seen as a clear attack on his brother, Leader of the opposition in Bihar Assembly Tejashwi Yadav. Party insiders said Tej Pratap Yadav has been upset with his brother after he was sidelined in the party recently.

Last month he had created a flutter in the RJD by calling state president Jagdanand Singh “authoritarian” and accused him of acting like a dictator. Sources said Mr Singh had offered to resign over the issue but Tejashwi Yadav and other senior leaders persuaded him to remain state president.

On Sunday, after the statement surfaced, the BJP and JD(U) demanded a clarification from the RJD on the allegation made by Tej Pratap Yadav. BJP spokesman Nikhil Anand said “Lalu Yadav’s elder son Tej Pratap has publicly said his father is being held hostage by few people in Delhi. We see this as a serious allegation and want Tejashwi Yadav to give a clarification and also inform us about his health”.

Tejashwi Yadav responded by saying that “the allegation that he was being hostage by a few people doesn’t match his personality. He has been a chief minister and railway minister.  Such an allegation doesn’t fit the personality of Lalu Yadav”.