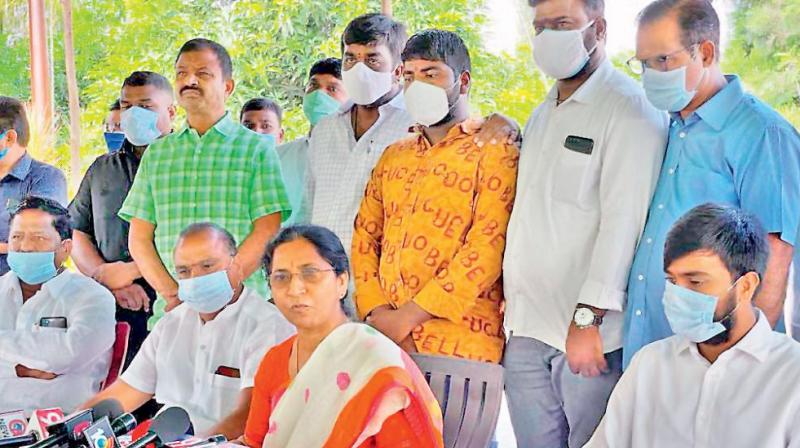 KARIMNAGAR: Assets of Etala Jamuna, wife of former minister Etala Rajendar, have tripled in three years, according to information in the nomination papers filed on her behalf on Monday for the October 30 Huzurabad byelections.

The total assets mentioned in the affidavit submitted along with Jamuna’s nomination papers were valued at Rs 43.47 crore. This is against Rs 14.55 crore assets shown in the papers filed for the 2018 Assembly elections.

It is a sentiment for Rajendar to have his wife Jamuna file her papers first for every election. He files his papers later, and she withdraws her nomination. The last date for filing nominations is October 8, and for withdrawals, October 13.

The rise in asset value was stated to be due to the investments in major companies. Of the Rs 43,47 crore assets, movable assets are valued at Rs 28.68 crore and immovable assets Rs 14.78 crore. Jamuna’s papers listed jewellery and other valuables worth Rs 50 lakh, including 1.5 kg gold. The affidavit listed her debt at Rs 4.89 crore.

The papers were filed on Jamuna’s behalf by the BJP leaders. They said they had filed the papers on instructions from the party leadership. The papers included the affidavit listing her assets and liabilities.

The BJP announced the candidature of Rajendar for the Huzurabad byelection. Several political leaders have their wives or relatives file their papers early. In case if the nomination papers of the leader are rejected, wives or relatives will still be in the fray.

Jamuna, however, had started participating in election campaigns after the ouster of Rajendar from the K. Chandrashekar Rao Cabinet, visiting several villages in Huzurabad constituency. At one time, it was said that Jamuna would contest on the BJP ticket in the byelection.