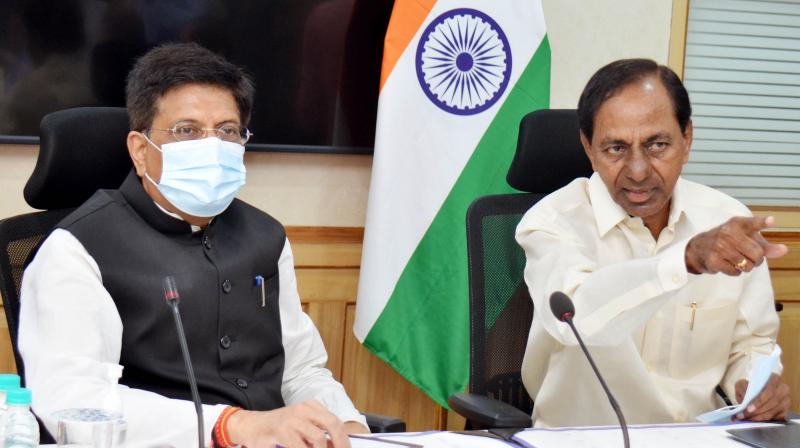 HYDERABAD: Chief Minister K. Chandrashekar Rao has extended his Delhi tour for the second time this month, generating much heat in political circles in the state.

As per original schedule, the Chief Minister had to return to Hyderabad on Sunday evening and attend the ongoing monsoon session of the Legislative Assembly on Monday. But he continued his Delhi visit on Monday and met Union minister for food and public distribution Piyush Goyal. There is no official confirmation from the CMO over when the Chief Minister would return to Hyderabad.

Rao left for Delhi for a three-day visit on September 24 to attend the meeting convened by Union home minister Amit Shah with Chief Ministers of Naxal-affected states on September 26.

Rao also met Union Jal Shakti minister Gajendra Singh Shekhawat on September 25 and discussed the Centre's gazette on irrigation projects on the Krishna and the Godavari.

On Monday, the CM took up the issue of paddy procurement with Goyal and FCI's refusal to purchase boiled rice from Telangana. Earlier this month, Rao left for Delhi on September 2 and laid foundation for construction for the TRS office in Delhi. He was supposed to return in three days after meeting Prime Minister Narendra Modi and union home minister Amit Shah. He met them on September 3 and 5 respectively but stayed in Delhi for nine days and returned on September 10.

Rao's extended stay in Delhi for the second time triggered speculation in political circles as it followed his one-to-one meeting with Amit Shah for over an hour at his residence on Sunday evening after the Naxal-affected states meeting.