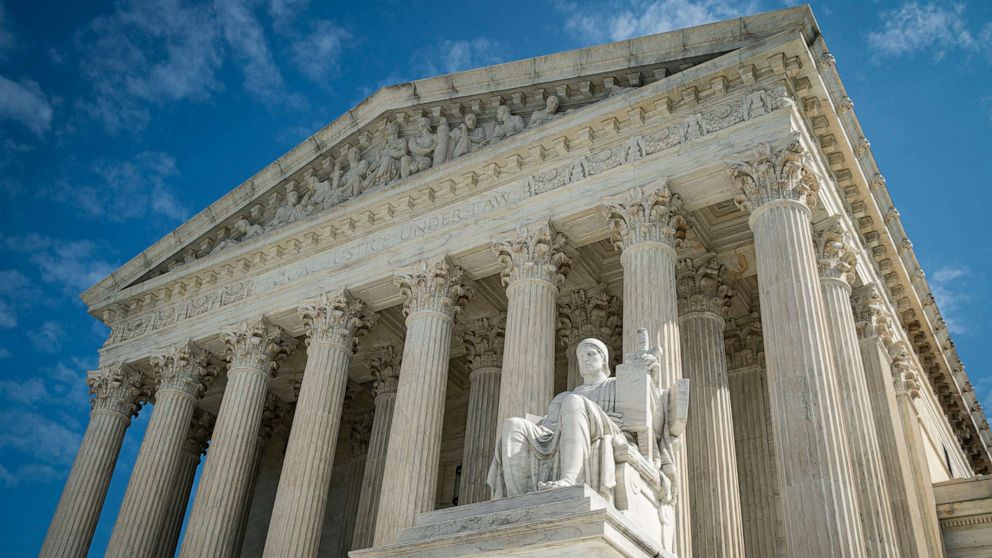 As the cry “Oyez! Oyez! Oyez!” rang out just after 10 a.m. Monday in Washington, the justices of the U.S. Supreme Court emerged from behind a 44-foot velvet curtain wall, walking into their vaulted marble chamber for the first time in 18 months.

They entered a world — a courtroom, a docket, an American society — dramatically changed and charged with anticipation since they last convened in-person as major decisions loom on abortion, guns, the death penalty and religious freedom.

A chamber normally packed with hundreds of spectators is now limited to an audience of just five dozen clerks and members of the press — all covid-tested, N95-masked, and seated 6-feet apart. The lectern for attorneys, once 3 feet from the bench, now positioned 10-feet away.

Proceedings that for years were shielded from much of the public in real-time are now livestreamed on the Supreme Court website.

The justices took their seats in a new array for the first time since the death of Justice Ruth Bader Ginsburg. Chief Justice John Roberts, in the middle of the iconic mahogany bench, is now flanked by senior conservative Justice Clarence Thomas and senior liberal Justice Stephen Breyer.

Thomas, 73, who was famously silent for years during oral arguments before the pandemic, asked the first question of the new, in-person term and remained loquacious throughout. A sprightly Breyer, 83, repeatedly whispered to the chief with a smile from his new center-stage spot.

Justice Anthony Kennedy, who retired from the court in 2018, was seated in a front box as special guest — a show of solidarity for the institution at a time when the court faces its lowest public approval rating in decades and a brewing crisis of credibility.

On the wings of the bench, the newest justices: Amy Coney Barrett on the right, appearing in-person for arguments for the first time; on the far left, an empty seat for Brett Kavanaugh, who dialed in by phone from home due to a COVID-19 diagnosis last week. (There were no audible signs of his illness; the court has said he is asymptomatic.)

For nearly two-and-a-half hours, the justices heard arguments in two opening disputes: the first, a suit brought by Mississippi against Tennessee over the pumping of groundwater from a massive aquifer that stretches across eight states. The second case addressed a criminal procedural matter involving the Armed Career Criminal Act.

Free-for-all questioning among the justices, which had been sidelined during virtual sessions, was back in full force but remained civil and polite. Chief Justice Roberts has implemented a new procedure at the conclusion of each round, calling on each justice by name to see if they have any additional questions.

The court was gaveled in and out by newly-sworn Court Marshal Gail Curley, a recently retired Army colonel and judge advocate general officer who joined the court this summer as its 11th marshal in history. She is responsible for court security and operations.

Meanwhile, outside the court building protests raged over abortion. That issue will get its first public hearing of the term next Tuesday Oct. 12, in a procedural case out of Kentucky. The marquee abortion case of the year out of Mississippi — which asks the justices to squarely consider nearly 50 years of precedent since Roe v. Wade — is set for December.