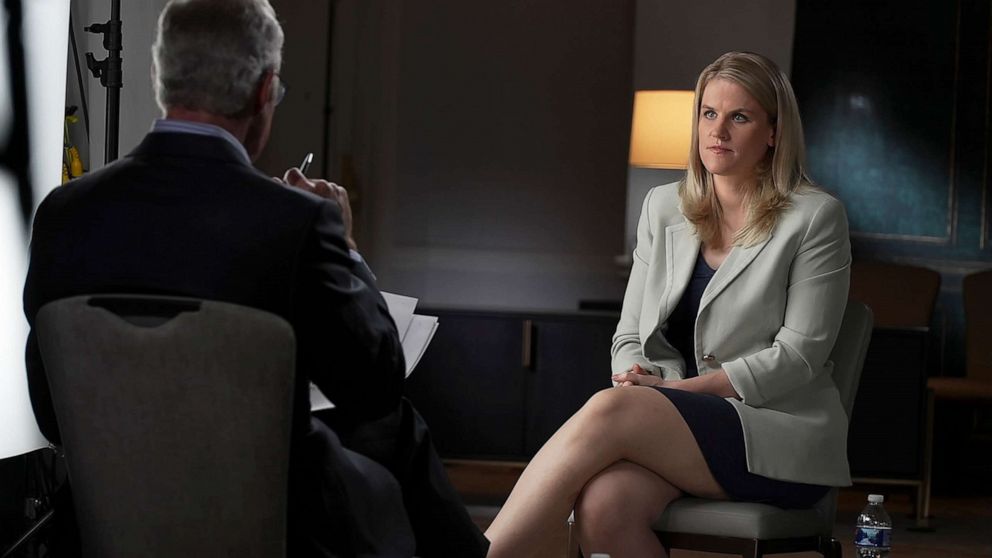 The Facebook whistleblower who unearthed documents she says shows the company had knowledge of its platforms’ negative impact will appear before a Senate subcommittee Tuesday.

Frances Haugen, who revealed her identity during a Sunday interview on CBS’ “60 Minutes” has been cooperating with a Senate Commerce subcommittee as part of its ongoing efforts to assess potential regulations for the social media giant.

Documents obtained by Haugen, a former product manager at Facebook, led to a series from the Wall Street Journal that reported that Facebook commissioned studies about and knew of potential harm that it was causing from negative or inflammatory content and did not act to stop it. Among the findings cited in the report were that Instagram made body image issues worse for one in three teens.

ABC News has not independently reviewed these documents, but Haugen is expected to tell the Senate subcommittee about the evidence she reportedly has that she says shows that the company intentionally ignored evidence of its potentially harmful impact.

“There were conflicts of interest between what was good for the public and what was good for Facebook,” Haugen alleged on “60 Minutes” on Sunday. “And Facebook over and over again chose to optimize for its own interests like making more money.”

Facebook has publicly refuted Haugen’s claims, pointing to investments in security that the company has made in recent years.

“Every day our teams have to balance protecting the ability of people to express themselves openly with the need to keep our platform a safe and positive place,” Lena Pietsch, the director of policy communications for Facebook, said in a statement Sunday. “To suggest we encourage bad content or do nothing is just not true.”

Nick Clegg, Facebook’s vice president of global affairs, said in a CNN interview on Sunday those making accusations that the company is commissioning research to “deliberately” brush it aside have it “back to front.”

“If we didn’t want to address those questions, we wouldn’t commission the research in the first place,” Clegg said.

Haugen’s career has included stops at Google, Pinterest and other social media companies, but she claimed what she saw at Facebook was “substantially worse.”

Sen. Richard Blumenthal, D-Conn., who chairs the Senate Commerce subcommittee on Consumer Protections, Product Safety and Data Security, said in a tweet that he’s been speaking with Haugen in the lead-up to her testimony.

“From her first visit with my office, I’ve admired her backbone & bravery in revealing terrible truths about one of the world’s most powerful, implacable corporate giants,” Blumenthal said in a tweet. “Facebook’s actions make clear that we cannot trust it to police itself. We must consider stronger oversight, effective protections for children, & tools for parents, among the needed reforms.”

Sen. Marsha Blackburn, the top Republican on the Senate subcommittee that will hear from Haugen, said it has been “fascinating” to comb over documents that Haugen provided the committee.

“What we want to know is how much data is Facebook capturing and what are they doing with that data, how long do they keep it, are they sharing with third parties, are they getting permission when they are datamining these children,” Blackburn said on Fox Business on Monday.

It is not clear how much information Haugen has shared with the committee in advance of her testimony, but during her interview Sunday, Haugen said she took thousands of pages of documents from Facebook so that “no one can question that this is real.”

Haugen also alleged on CBS that Facebook decided to ease safeguards put in place to stop the spread of disinformation during the 2020 election season, which she says contributed to the Jan. 6 attack on the United States Capitol.

In an internal memo obtained by the New York Times, Clegg refuted that allegation as well.

“Social media has had a big impact on society in recent years, and Facebook is often a place where much of this debate plays out,” Clegg wrote. “But what evidence there is simply does not support the idea that Facebook, or social media more generally, is the primary cause of polarization.”

Haugen’s appearance before the committee Tuesday comes as part of an ongoing effort by Congress to assess how to regulate massive social media companies such as Facebook.

Last week, in a hearing before the same subcommittee that Haugen will appear before, lawmakers accused Facebook of taking a page from “big tobacco’s playbook” by hiding research about what they consider to be its addictive and harmful nature.

Antigone Davis, Facebook’s global head of safety, faced bipartisan scrutiny as she defended the company during the hearing that lasted some three hours.

“We understand that recent reporting has raised a lot of questions about our internal research, including research we do to better understand young people’s experiences on Instagram,” Davis stated in written testimony. “We strongly disagree with how this reporting characterized our work, so we want to be clear about what that research shows, and what it does not show.”