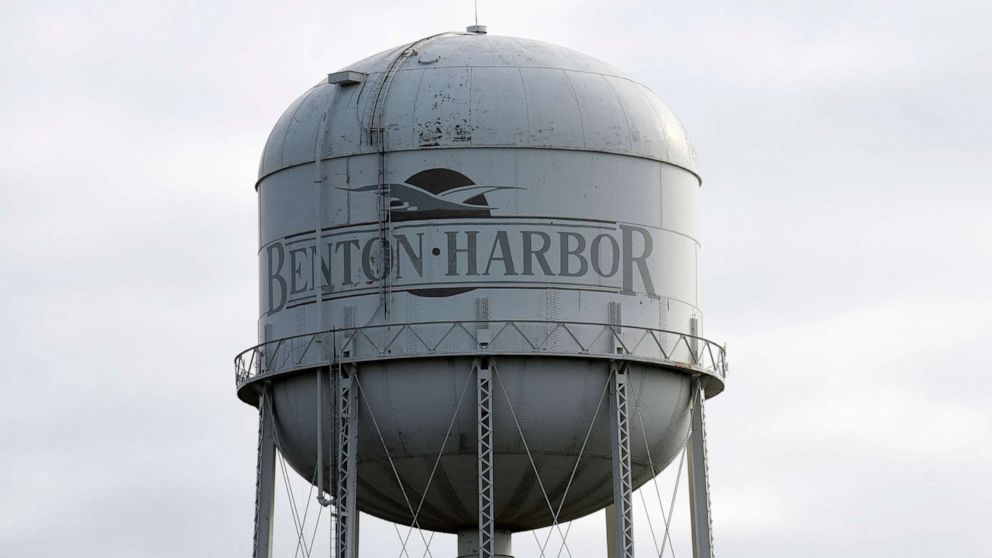 Michigan officials have told Benton Harbor city residents to use bottled water for drinking, cooking and brushing teeth in response to elevated levels of lead in tap water.

State health officials released the warning Wednesday for the city of 9,600, located about 100 miles from Chicago.

Bottled water should also be used for rinsing food and mixing powdered infant formula. However, unfiltered tap water can be used for showering, bathing, washing hands, dishes, clothes and cleaning.

Officials said the U.S. Environmental Protection Agency is conducting a study to gather data on the effectiveness of water filters to reduce lead in the city’s drinking water.

So far, more than 4,500 cases of bottled water have been diverted to the city and another 15,500 cases are being delivered in the coming days at several distribution sites.

“This action is part of an accelerated, across-the-board effort to reduce the risk of exposure to lead in drinking water while the city replaces all lead service lines,” health officials said in a news release.

Lead contamination in water testing has been an issue in Benton Harbor, which sources its water from Lake Michigan, for several years.

Lead can enter drinking water when plumbing materials and service lines contain lead corrosion. There is no safe level of lead exposure for children and even exposure to low levels has been linked to damage to the central and peripheral nervous system and learning disabilities, according to the U.S. Centers for Disease Control and Prevention.

The EPA has a lead contamination action level of 15 parts per billion. If testing shows more than 10% of water samples hit that mark, water systems are required to optimize corrosion control treatment, educate the public about lead in drinking water and replace portions of lead service lines.

In Benton Harbor, water testing surpassed that level in 2018. One home in 2020 tested at 440 ppb for lead. Eleven homes tested this year showed water with lead levels above 15 ppb this year, with one home hitting 889 ppb — nearly 60 times the EPA’s action level, according to data released by the city.

The warning to use bottled water comes after local advocates and activists filed a petition with the EPA asking for a federal intervention on Sept. 9

Rev. Edward Pinkney, a local activist and president of the grassroots Benton Harbor Community Water Council, described the water coming out of the tap as “yellow with little particles in it with a bad smell.”

“It took three years and a petition to force this to happen. There’s a major problem. They were trying to cover it up,” Pinkney told ABC News. “When you have lead in your water, you’re poisoning the community. We must take a stand and make sure that every single community has clean water and we must do it immediately. We can’t wait.”

The petition stated that after surpassing the 15 ppb threshold for corrosion control treatment and other actions, “as we have seen here in Benton Harbor … this treatment technique has failed to meet its preventative health standards and has exposed countless people to lead-contaminated drinking water.”

“We’ve listened to the community’s concerns and out of an abundance of caution, we are recommending that residents use bottled water,” Elizabeth Hertel, director of the Michigan Department of Health and Human Services said in a news release.

The bottled water advisory is an echo of the Flint, Michigan, crisis in 2014 and 2015 where the state switched the city’s water supply to come from the Flint River. An investigation later found there were highly toxic levels of lead in the water.

“People are very upset because they feel they can’t trust the government. They allowed our children to suffer,” Pinkney said. “They actually didn’t learn anything from Flint.”

Under Michigan’s 2022 state budget, $10 million is dedicated to replace service lines in Benton Harbor and $15 million for a new drinking water emergency fund.

Pinkney praised Gov. Gretchen Whitmer for pledging to replace the pipes in the city in five years instead of 20 years originally floated, but he insists, “We think that she can do it in a year.” He’s also calling on the governor to declare that the water in Benton Harbor is not safe to drink for public awareness.

“Here’s what needs to be done: they need to replace all the lead pipes within a year, make sure every family has bottled water until this thing is resolved and they should not be paying for this water coming out of the tap,” Pinkney said.